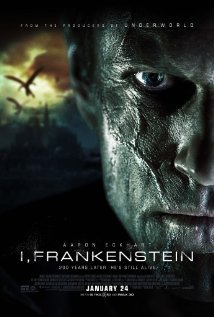 I, FRANKENSTEIN starts where Mary Shelley’s famous novel leaves off. After killing his creator’s wife and burying his creator in a Christian grave, Frankenstein’s monster becomes entangled in an epic battle between evil demons and gargoyles. The gargoyles are considered a lower form of angel in this Heaven vs. Hell tale. On his journey to gain a soul, the monster finally finds a human friend and helps save humanity.

I, FRANKENSTEIN is mediocre in just about everything, from the script to the acting. However, there are some wonderful moments. For example, there are some inspiring quotes from the gargoyle queen to Frankenstein’s monster that seem to shine with Biblical truth. Also, the acting by both Miranda Otto as the gargoyle queen and Bill Nighy as the head villain is good. These moments show what this movie could potentially have been. Ultimately, however, the worldview is mixed, with conflicting Christian, occult, and humanist content. I, FRANKENSTEIN also has intense action violence with lots of fighting. Despite its positive qualities, I, FRANKENSTEIN has some things requiring strong caution and other things requiring light caution.

(PaPa, CC, OO, HH, FR, BB, L, VV, N, A, MM) Strong mixed pagan worldview with Christian, occult, and humanist elements, and some confusing or confused theology, with a confusing juxtaposition of brutality and Christian kindness and wherein the protagonist is not as good as some of the side characters who help him, with gargoyles considered a lower form of angelic beings fighting evil demons on earth; a couple relatively light obscenities; strong violence with little blood includes, however, a good deal of battle and warfare, evil demons explode in a ball of fire when they’re killed, “good” gargoyles when they die turn into light and shoot up into the sky, a lot of sword fighting, a lot of hand-to-hand combat, a demon’s face is burned with holy water, woman stitches up wound on protagonist, a room is filled with dead bodies hanging on conveyor belts but encased in metal; no sex, upper male nudity; bar scene with alcohol and drinking; no smoking or drugs; and, lying, deceit, betrayal, revenge, and the hero/protagonist is not quite as good as some of the characters who help him.

I, FRANKENSTEIN is a movie with mixed humanist and Christian views, which is a bit confusing in its moral and theological lessons. The gargoyles provide moral insights, but have their own failings. The “hero,” who’s called Adam, turns out to be more of an anti-hero than someone children should look up to. The movie’s acting, script, and character development are also lacking.

I, FRANKENSTEIN picks up where the classic book FRANKENSTEIN left off. We are given a somewhat disorienting overview of what happened in Mary Shelley’s book under the narration of Frankenstein’s monster, who becomes the central character to this movie. He kills Frankenstein’s wife, and Frankenstein pursues him. When Dr. Frankenstein freezes to death, the monster brings him back and buries him next to his wife.

This is the moment where the plot begins to jump around. Without any warning, demons come out and begin to battle Frankenstein’s monster. Eventually, gargoyles show up as well. After the monster has “descended” the demons, the gargoyles take him back to their cathedral home.

The queen of the gargoyles names the monster “Adam,” after the first man, because he’s the first of his kind – whatever it is. Adam turns his back on humans after the way Dr. Frankenstein treated him and spends the next 200 years traveling in the shadows.

The demons want him for their own scheme, however, so eventually he’s pulled back into the battle between the gargoyles and the demons. Even the gargoyles don’t fully trust Adam, but he eventually proves to be what they were “asking God for,” just not what they expected.

The character development in the movie lacks depth. It seems that everyone and everything changes around “Adam,” but he never truly changes at all. In the end, he grudgingly accepts humans because of the kindness of a woman named Terra, but he never has a defining moment where he “earns his soul,” despite somehow having a soul at the end of the movie.

Also, the storyline, which has so much potential, jumps around throughout the movie. Until halfway through, the viewer isn’t really sure what the plot is or where the movie is headed, potentially leaving the audience confused.

The acting of Aaron Eckhart as Frankenstein’s monster is lacking throughout the movie. His expressions and demeanor stay the same, even when Terra enters his life. If he truly made the transition from monster to human, viewers might have expected much more of a character arc.

The acting of Bill Nighy as the prince of the demons and Miranda Otto as the Queen of the Gargoyles, however, was the saving grace of the movie. They probably will leave viewers wishing they had at least had one scene together. Even Yvonne Strahovski as Terra was a breath of fresh air after being too long with Eckhart and the gargoyles.

I, FRANKENSTEIN has a mixed worldview with some Christian, occult, and humanist content. The movie’s beginnings are a good reflection of the entire movie. Frankenstein’s monster kills Dr. Frankenstein’s wife, then shows kindness to Dr. Frankenstein in giving him a “Christian burial” in a cemetery. This juxtaposition of brutality and Christian kindness are present throughout the movie, confusing the viewer. There are both occult and Christian influences in this movie, due to the main war being between demons and gargoyles. These gargoyles, in the movie, are a lower version of angels and answer ultimately to Michael the Archangel.

There is also a good deal of battle and warfare in I, FRANKENSTEIN, although little to no blood. When demons are killed they explode in a ball of fire, and when gargoyles die they turn into light and shoot up into the sky. While not bloody, this action could be startling for small children. There is also a lot of combat with swords and hand-to-hand combat. At one point, a demon’s face is burned on holy water, and it could be scary and gross to children.

The only blood is seen when Adam is cut halfway through the movie, and he takes off his shirt so that Terra can stitch the cut. This also is the only account of upper male nudity in the movie. Towards the end of movie, the characters walk into a room that is filled with dead bodies hanging from conveyer belts. While the bodies are encased in metal, the scene is still creepy and frightening.

I, FRANKENSTEIN has many references made to the supernatural battle between Heaven and Hell, along with many other Biblical references. The Queen of the gargoyles names Frankenstein’s monster “Adam,” after the first man, and says he has a “higher purpose,” but she also makes lightly of Adam’s murder of Dr. Frankenstien’s wife by saying it was “in the heat of passion.” The movie’s theology is often on the right track, but sometimes questionable. For example, the gargoyle queen is the “only link to the archangels,” and the gargoyles fear that, without her, they can’t talk to Heaven. This we know is untrue, because anyone can speak to God and Jesus whenever they want. However, at times the gargoyles pray to God to help someone, or to forgive them, and make references to a higher purpose. The movie also includes many Catholic signs such as holy water and using crosses to get rid of demons, which sometimes seems like the gargoyles are bestowing spiritual power on inanimate objects.

Also, the gargoyles at one point say that Adam’s existence means “God is not the only creator of man anymore.” Other messages from the gargoyles seem positive, however, such as when the queen says, “Adam is alive, and all life is sacred.” Discussion definitely would be necessary to separate the good messages from the bad, however.

While the gargoyles typically (though not always) provide a good voice in the movie, Adam’s role is not so discernibly good. He doesn’t trust humans and fails to forgive them at all until they finally are nice to him. This of course, doesn’t reflect Jesus Christ’s mandate to turn the other cheek. Also, Adam’s mission in the movie is based on revenge, not in helping anyone. Even when he earns a friend in Terra, he doesn’t warm up to any of the other human race, and protects her selfishly, not selflessly.

Finally, there is some lying and deceit in I, FRANKENSTEIN, not only amidst the demons, but also when the gargoyles deceive Adam, and when Adam betrays the gargoyles in order to protect himself and Terra. Adam isn’t a good role model for young children. The better role models are Terra and a doctor who helps Adam. Terra’s reasons for science are to help people, and she stands up for what she knows is right throughout the movie. Where Adam fails, Terra shines.

All in all, therefore, despite some positive qualities, I, FRANKENSTEIN contains things in it that require sometimes a strong caution and sometimes a light caution.