"Life Isn’t Always What It Seems" 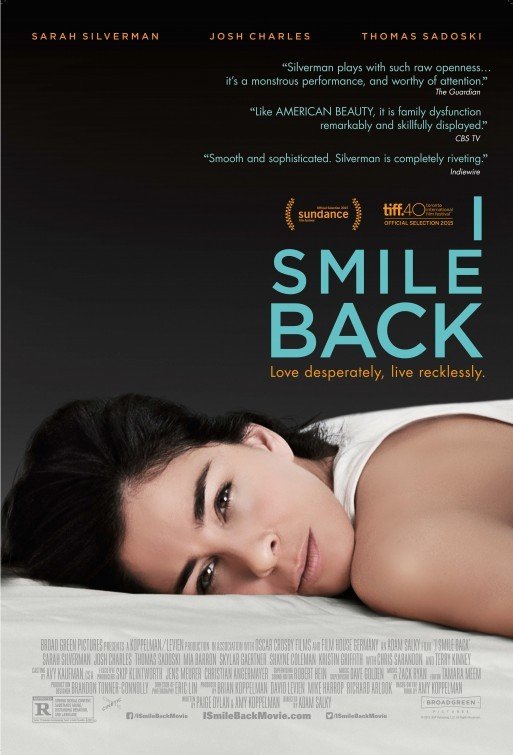 I SMILE BACK is a harrowing movie of one woman's battle with drugs and alcohol. On the outside, Lanley has a charming life with her husband and two children, but on the inside she’s withering away. When nobody is watching, Lanley drinks herself to sleep and takes hits of cocaine in the bathroom. After a drug overdose, she goes to rehab, where the audience learns her addiction began when her father left when she was nine. When she gets clean, she returns home until a trip to see her father shakes her up again. I SMILE BACK is a depressing portrait of a woman who lets her emotions dominate her life. She wants to get better for her family, but she falls to sin and substance abuse every time. He husband doesn’t help, because he’s constantly criticizing the Bible and any spiritual solutions to his wife’s problem. Sarah Silverman delivers a powerful performance as a lost woman, but her performance is overshadowed by the movie’s sinfulness, addictions and hopeless ending. Ultimately, therefore, I SMILE BACK offers little hope and virtually no redemptive content.

(RoRo, AbAb, APAP, B, L, VV, SSS, NNN, AAA, DDD, MMM) Strong Romantic worldview where married woman turns to drugs and alcohol to numb the pain of an absent father, with no mention of Jesus or God for redemption, protagonist’s husband says the Bible is fiction, and movie has a depressing view of American suburban life, with some light moral worldview elements when female protagonist displays some love and compassion toward family; eight obscenities and profanities, and woman vomits; Lanley masturbates with a teddy bear; moderate violence when protagonist is beaten by a stranger at a bar, woman’s head is depicted with slashes and open bloody wounds, woman’s husband grabs her and pins her to a wall after she relapses, woman grabs her doctor by the collar and shakes her to death while in rehab; extreme sexual immorality includes scenes of depicted adultery and marital sex, self-abuse using a teddy bear, groping, woman touches her body while standing in front of a mirror; full female nudity in one scene, images of upper female nudity in other scenes, rear nudity in some scenes, and some upper male nudity; heavy drunkenness and alcoholism displayed, woman drinks vodka and wine by the bottle, woman gets drunk alone after her family goes to bed, alcohol and drunkenness displayed at bars, woman drives drunk and almost dies; heavy drug use includes woman snorts cocaine, woman eats lollipops filled with drugs, woman smokes cigarettes every time she feels stressed, woman overdoses on some pills and taken to hospital, and a disturbing scene where woman snorts cocaine while her nose starts to bleed; and, lying, cheating, addict leaves rehab, and dysfunctional married woman leaves her family.

I SMILE BACK is adapted from the novel by Amy Koppelman. It’s a story about one woman’s battle with addiction. Sarah Silverman gives a gripping performance shedding her comedic image and rendering a wide range of emotion, but her strong performance is overshadowed by endless sexual content and substance abuse. Ultimately, it’s a depressing movie with little redemptive content. On the outside, Lanley has the picture perfect life. She lives in a magnificent home with her husband and two children. She finds great joy in simple things like packing her children’s lunches and driving them to school. She’s content with her suburban life, or so it seems. One morning when Lanley is getting ready to walk her children to class, a teacher stops her from entering because she doesn’t have her ID with her. Lanley becomes frustrated and has to let another child’s mother walk her children to school. Lanley storms back to her car, busts open a pack of cigarettes, drives to her girlfriend’s house, and has sexual relations with her friend’s husband. This is when the audience is exposed to the catastrophe of Lanley’s life. After a full nude scene of Lanley committing adultery, she takes a hit of cocaine, exposing another crutch in her life. That evening when her husband and children come home she acts like everything is fine, but it’s not. While the family eats dinner, Lanley takes regular trips to the kitchen to pour herself more wine. By the time dinner is over, she’s finished the entire bottle and has barely touched her dinner. Her husband tells her to eat more, but she lashes out at him to mind his own business. That night after the family goes to sleep, Lanley sneaks downstairs to pour herself some vodka. She calls a mother at school that upset her and cusses her out. With deep feelings of guilt, she drinks more vodka and takes a handful of pills. Later that night, her husband finds her sweating on the floor after an overdose. He rushes her to the hospital where Lanley checks into rehab the next day. During rehab, Lanley reveals her father left her when she was nine. This abandonment sparked her drug and alcohol abuse. After Lanley is clean, she returns home. Everything is going great until Lanley decides to pay a visit to her father. When she goes to see him, she discovers he’s remarried and has a little girl. Her heart brakes when she sees his new family, and she relapses. She gets drunk at a bar and goes to bed with a man who physically beats her. She returns home that evening, with blood dripping from her face. When her husband sees her, he doesn’t even known what to say, and he never gets the chance. Lanley walks out of the house, doing just what her father did to her, leaving the family behind. I SMILE BACK touches on a variety of deeply painful topics including drugs, cocaine, alcoholism, mental illness, adultery, and addiction. The movie does an excellent job at conveying the extent to which addicts go to hide their addiction. With extreme close up shots and a continual focus on Lanley’s eyes, the audience can almost feel Lanley’s pain through the screen. Yet, the extent of sexual content and immortality displayed on camera makes I SMILE BACK an uncomfortable movie to watch. Sarah Silverman has no boundaries, but instead of admiring her performance, it’s almost a question of why would you do that on camera? A hopeless worldview overshadows every positive step towards redemption, even when Lanley gets clean from rehab. Thus, in the end, Lanley chooses drugs over her family. Also, there is no mention of God, the Bible or prayer as a means to help her struggles. In fact, her husband, a successful writer, continuously claims the Bible is a made up work of fiction. Ultimately, therefore, I SMILE BACK offers little hope and virtually no redemptive content.