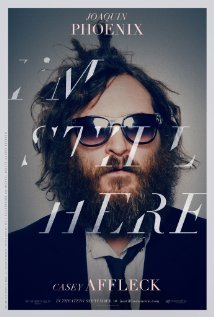 I’M STILL HERE is a pseudo-documentary depicting the alleged downward spiral of actor Joaquin Phoenix after he wins Best Actor for playing Johnny Cash in WALK THE LINE. Joaquin complains that fame and the pressures of Hollywood are driving him crazy, and that he wants to make true art from the heart. He decides to embark on a rap music career. Brother-in-law actor Casey Affleck follows him with a camera, home-movie style. As Casey films him for over a year, Joaquin experiences constant mishaps and awkward celebrity encounters. He also engages constantly in immoral behavior along the way.

I’M STILL HERE is remarkably self-indulgent. It’s shot as cheaply and “realistically” as possible, purporting to be a documentary of a real period in Joaquin’s life. The end credits question that assumption. From a moral perspective, there is nothing redeeming about this movie. It’s hard to watch the jumpy and sometimes grainy footage. And, the movie is sure to offend everyone with any taste, regardless of their spiritual beliefs or moral concerns. The only entertaining moments are Joaquin’s encounters with David Letterman and two other celebrities, where the jokes are at his expense.

(HHH, AbAbAb, PaPaPa, LLL, VV, SS, NNN, AAA, DDD, MMM) Very strong humanist, godless worldview with very strong immoral, self-destructive behavior reflecting a hedonistic paganism; more than 250 obscenities, several profanities, some racial epithets, drunken vomiting, and personal assistant defecates on rude boss as he sleeps; strong, somewhat comical violence includes brawl between boss and his personal assistant, slapping and fight at a concert; strong sexual content includes protagonist talks dirty, misogynistically while surfing the web for prostitutes, has two prostitutes come over and dance with him, and engages in sexual foreplay with one before scene cuts away and implies further fornication; extreme nudity includes scenes of full frontal male nude plus some upper female nudity; extreme alcohol use and abuse includes drunkenness and getting sick from overindulging; smoking cigarettes and extreme drug use includes smoking marijuana and snorting cocaine; and, very strong miscellaneous immorality mostly includes spoiled celebrity gets away with rude behavior, mistreatment of others, selfishness, slovenliness, insults, plus assistant gets revenge, which results in a brawl, and protagonist is apparently estranged from his father.

I’M STILL HERE is an abhorrent pseudo-documentary that depicts the alleged downward spiral of actor Joaquin Phoenix after he wins a Best Actor Oscar for portraying Johnny Cash in WALK THE LINE. It shows him complaining that fame and the pressures of the Hollywood machine are driving him crazy, and that he wants to make true art from the heart.

Joaquin decides to embark on a career as a rapper, with brother-in-law actor Casey Affleck following him with a camera, home-movie style. Casey films Joaquin for over a year as he experiences constant mishaps and awkward celebrity encounters, and engages in constantly abhorrent immoral behavior along the way.

I’M STILL HERE is a remarkably self-indulgent enterprise, shot as cheaply and “realistically” as possible due to the fact it purports to be a documentary of a real period in Phoenix’s life. Yet, the end credits reveal the movie was directed by Affleck and written by Affleck and Phoenix himself, with the array of celebrity and other “real” person appearances listed as cast members as well. Thus, the movie actually seems to be an elaborate ruse, in which Phoenix even made national news mid-filming by engaging in a bizarre, seemingly drug-addled interview on David Letterman’s latenight TV show.

Real or not, the behavior Phoenix engages in from start to finish is completely abhorrent. Hiding behind matted hair, an unruly beard and giant sunglasses, he swears constantly, smokes joints, gleefully snorts cocaine he’s “scored” on his own, surfs the Web for hookers to hire and then hires a pair, and eventually makes a fool of himself at a major rap performance in a Miami club that degenerates into his punching a heckler before vomiting repeatedly backstage. In the end, he travels to Panama to visit his estranged father and winds up wandering deeply into a river, submerging himself at film’s end in a seeming fit of hopelessness.

From a moral perspective, there is nothing redeeming about this film. It’s also hard to watch the jumpy and sometimes grainy footage. In fact, the movie is sure to offend everyone with any taste, regardless of their spiritual background and moral concerns. The only remotely enjoyable moments are Joaquin’s encounters with Letterman, rap kingpin Sean “Diddy” Combs and comic actor Ben Stiller. In each of those, however, the laugh is on Phoenix, thus making even those experiences utterly unpleasant. Almost completely, this movie is a must to avoid.