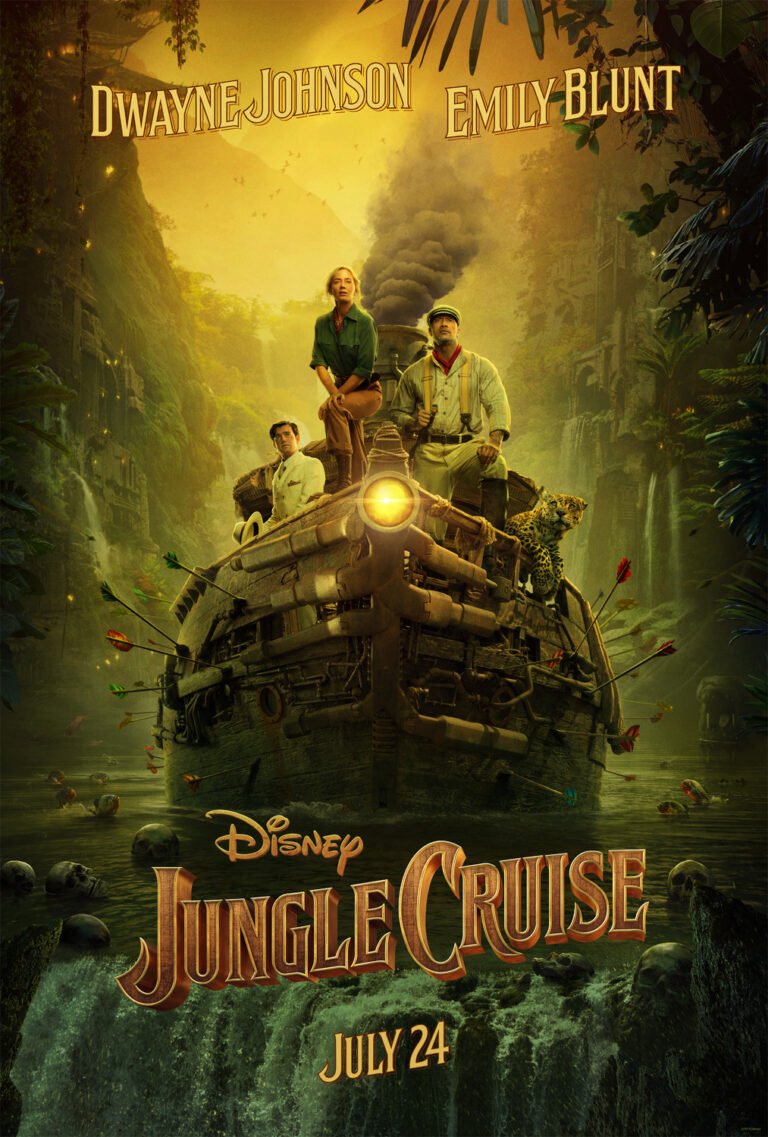 JUNGLE CRUISE is a big action adventure movie based on Disneyland’s popular ride and set in 1916. Lily, a young English scientist, hires Frank, a debt-ridden boat captain, to take her down the Amazon River to find a fabled tree with leaves that cure any disease. Along for the ride is Lily’s brother. However, an evil German prince is hot on their trail in his very own German submarine. Innumerable other dangers await them down river, including a group of cursed Spanish conquistadores awakened from suspended animation.

JUNGLE CRUISE features many exciting, beautifully filmed escapades. Dwayne Johnson, as Frank, and Emily Blunt, as Lily, have strong chemistry together. JUNGLE CRUISE is laced with lots of humor. Sadly, despite some Christian, redemptive metaphors about life, death and resurrection, JUNGLE CRUISE has a strong Romantic worldview that attacks traditional morality. The heroine is a spunky female who’s bucking the staid, corrupt male establishment. Traditional rules don’t apply to her. Also, her prissy brother comes out as homosexual and makes a lewd sodomy joke at one point. So, MOVIEGUIDE® advises extreme caution for JUNGLE CRUISE.

(RoRo, PC, Fe, Ho, Ab, C, B, O, L, VV, S, A, M)
Dominant Worldview and Other Worldview Content/Elements:
Strong Romantic worldview with politically correct, feminist and pro-homosexual elements attacking traditional morality, which is based on biblical morality, mitigated by some Christian, redemptive, moral content, including some metaphorical references to life, sacrificial, death, resurrection, and a mythological tree of life, plus some mystical, occult elements regarding curses and the magical
Foul Language:
No obscenities, one light OMG profanity, one other possible light profanity, and two people get sick and vomit after a bumpy boat ride
Violence:
Lots of strong and light violence with lots of jeopardy, some of it scary, includes boat comes dangerously close to going over a large waterfall, cursed soldier comes alive and is inundated with snakes as part of his curse, another soldier is inundated with bees, man is pierced by a long spear, but the spear is painfully pulled out, submarine fires at another boat two or more times, an explosion occurs, characters in danger of drowning, woman dangles on a ladder high above a London street, cursed soldiers are awakened and attack people, jaguar threatens people, snakes snap at people, people are chased by other people, fighting, narrow escapes
Sex:
One main male character says he’s not interested in the women his family try to get him to marry and implies he can only “love” men, and he makes a lewd homosexual innuendo in one scene when he’s carrying a spear and asks the wounded hero, “Would you like to bite down on my stick?”
Nudity:
No nudity
Alcohol Use:
Some alcohol use
Smoking and/or Drug Use and Abuse:
No smoking or illicit drugs, but some natives put three characters to sleep with poisoned darts; and,
Miscellaneous Immorality:
Stealing.

JUNGLE CRUISE is a big, sweeping action adventure movie based on Disneyland’s popular ride, which has been crafted into a story about a young Englishwoman who hires a debt-ridden boat captain to take her down the Amazon River to find a fabled tree with leaves that supposedly can cure any disease. Laced with lots of humor but no obscene language, JUNGLE CRUISE has many exciting escapades and beautifully filmed action sequences, with some Christian, redemptive metaphors and elements, but the movie has a strong Romantic worldview with some with politically correct, feminist, pro-homosexual elements attacking traditional morality, and the story contains some scary characters and situations involving slithering snakes.

The movie opens in 1916 with MacGregor Houghton trying to convince the Royal Academy in London to finance an expedition into the Amazon to find a mystical, magical tree with fabled healing properties. The stuffy scientists in attendance mock MacGregor off the stage. Meanwhile, his sister, Lily, who put her prissy brother up to making the public request, sneaks into the archives of the Academy. There, she steals an arrowhead from the last Amazon expedition, which supposedly is a key to unlock to unlock the location of the magical tree. She steals the arrowhead right under the very nose of a German prince named Joachim, who’s rumored to be the son of Kaiser Wilhelm of Germany. The curator of the archives had just finished a deal with Prince Joachim to give him all the artifacts from the expedition, in exchange for a very large donation.

Cut to the Amazon, where Captain Frank Wolff is giving one of his pun-infested tours to some tourists on his ramshackle boat. Part of the tour is clearly fake. Frank even uses some local people to pretend to be savage headhunters to scare the tourists.

Unhappily for Frank, he owes a lot of money to his rival in the tour business, a portly Italian named Nilo who repossesses Frank’s boat engine when he returns to town. Lily meets with Frank to rent his boat to travel down the Amazon to the legendary location of the magical tree. Frank at first refuses, because he thinks she’s on a wild goose chase, but Lily offers him lots of money.

With Lily’s brother along for the ride, they’re soon on their way down the Amazon. After, Fran steals back his engine from Nilo, of course. However, Prince Joachim is hot on their trail in his very own German submarine.

Of course, innumerable other dangers await them down river, including some supernatural ones, in the form of a group of cursed Spanish conquistadores awakened from suspended animation.

JUNGLE CRUISE features many exciting escapades and beautifully filmed action sequences. In many ways, it’s similar to Disney’s PIRATES movies, the Indiana Jones movies and the 1984 movie ROMANCING THE STONE. The action does slow down slightly in the middle, but not by much. Dwayne Johnson, who plays Frank, and Emily Blunt, who plays Lily, have some good chemistry together. This definitely helps the movie when it comes time for their characters to develop strong romantic feelings for one another. Viewers will root for these two characters when it looks like they’re going to be separated forever. Admittedly, the chemistry isn’t as special as Indy and Marion in the original Indiana Jones movie, but that’s a high bar to set. JUNGLE CRUISE is also laced with lots of fun humor. For example, the movie borrows heavily from the puns that the tour guides on the Disneyland ride subject on Disneyland visitors.

As with many Disney adventure movies, the action sequences involve some scary moments. The heroes not only have to avoid a huge, deadly waterfall. They also encounter the scary leader of the cursed conquistadores, who was cursed centuries ago with slithering jungle snakes.

Sadly, despite some Christian, redemptive metaphors about life, death and resurrection, JUNGLE CRUISE has a strong Romantic worldview overall. The heroine is a spunky female who’s bucking the staid, corrupt male establishment of the Royal Academy. The traditional rules don’t apply to her, so she steals the arrowhead from the Academy. Also, the movie reveals in the middle that Lily defended her brother when it came out that the reason he didn’t marry any of the women their family offered to him was because he’s homosexual. Their family disowned Lily’s brother, but she stood behind him. Lily’s brother reveals all these facts to Frank in one scene. Also, at one point, the brother, holding a spear, makes a crude, unnecessary sexual innuendo when he asks a wounded Frank, “Would you like to bite down on my stick?” The filmmakers are careful not to include any obscenities in their movie, so the lewdness of this line is unexpectedly strong and rather disturbing. In fact, the homosexual brother is played with such a prissy quality that one wonders if LGBT activists are going to look as favorable on it.

All in all, MOVIEGUIDE® must advise extreme caution for this particular trip down the Amazon. It’s somewhat of a missed opportunity to provide moviegoers with a truly family-friendly experience. That’s what happens when you let silly leftwing politics creep into your art and entertainment, not to mention your commerce.