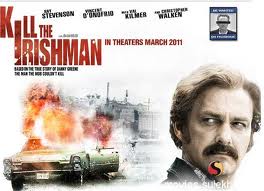 KILL THE IRISHMAN is a biopic covering the rise and fall of the notorious Cleveland mobster Danny Greene. The story is filled with graphic violence and images ripped from historical headlines, even real television footage covering the events. Danny’s story is the story of one man’s delusions of grandeur stemming from a belief in the mythology of the Celtic warrior.

The direction in KILL THE IRISHMAN is uneven. It misses numerous beats in the story. The lead actor, Ray Stevenson, gives a strangely stoic, unconvincing, disappointing performance devoid of emotional complexity. The overall production value is limited by the budget, but is adequate. Because of poor direction and the lead’s poor performance, the story quickly becomes tedious since the audience fails to connect with the protagonist. There are a few positive moments in the character’s development, but they are quickly undermined by a self-destructive descent into blood, violence and crime. The story does loosely follow a Christian worldview, showing the utter destruction of a violent, criminal life. However, in spite of some wonderful secondary performances, KILL THE IRISHMAN is just plain disappointing and fails to present a powerful movie.

(C, B, PaPa, FRFR, LLL, VVV, S, NN, A, D, MM) Light Christian, moral worldview with a morality play about the rise and fall of a gangster (showing that a life of crime and criminal violence eventually doesn’t really pay), with a scene where the protagonist’s wife and children return from church trying to get their dad to go as well, but protagonist keeps resuming his pagan lifestyle, which includes a personal belief in the false mythology of the Celtic warrior; 56 obscenities, 15 racial slurs, and 6 profanities; very strong violence includes car bomb nearly kills a man, youth street fighting, pencil stabbed through a hand, fist fight, violently slapping a union boss repeatedly, goons attack a guy and punch him out, guy beat up and splattered with blood, character beats up another man to intimidate him, car bomb kills a man, man is shot dead, another car bomb nearly kills the lead, a car bomb kills another mob boss showing his body exploding apart, man is shot in the head, another man shot in the head, a house is blown up with two people inside who survive, a young man is stabbed repeatedly in the chest, multiple car bombs going off, and another man shot in the head; implied sex in back seat of a car; upper female nudity and upper male nudity; several depictions of drinking in bars; smoking in bar scenes; and, lying, murder, corruption, gangsterism, and racism, but implicitly rebuked in story showing that crime eventually doesn’t pay.

KILL THE IRISHMAN is actually a biopic depicting the rise and fall of the notorious Cleveland mob boss Danny Greene, aka “the Irishman.”

The story introduces Danny (played by Ray Stevenson) as he miraculously survives a car bomb explosion. Val Kilmer, who later appears as Detective Joe Manditski of the Cleveland Police, narrates the story, giving viewers Danny’s background. An orphan raised by his grandfather, Danny grew up with the mythology of the Celtic warrior surrounding him. Living the hard life of an urban street kid, he was forever in fights, mostly getting beat up mostly. This hard life develops a hard man.

The boy becomes the man, and Danny comes to the rescue of his longtime friend, whose life is in the balance because of loan sharks and the mob coming for gambling debts. Danny vouches for his friend, no doubt saving his life – for the moment. Playing the older brother, Danny smacks the friend, forcing a promise from him never to gamble again. It’s a short-lived promise, however.

Danny and his boys work the grain elevator down at the docks where it may reach 110 degrees, and a man can pass out from heat exhausting. The Union Boss doesn’t care, however. When a man nearly dies working in the inhumane conditions, the Boss couldn’t care less about anything but the bottom line.

Eventually, Danny rises to leadership, the Boss is killed, and Danny takes his place as the newly elected Union Boss. From there, he begins carving out his territory, building his kingdom with intimidation and corruption.

Then, Danny gets sloppy. He misses the fact that he’s being tailed by a hungry journalist, who chronicles his every misstep. Eventually, the reporter prints a headline exposé that is quickly followed by charges of larceny, extortion and labor racketeering. In jail, with no money and his wife and children at risk, Danny cuts a deal to work as an informant on the mob for the Feds.

At first Danny seems to be legitimately trying the straight life, looking for work with a former acquaintance, Shondor Birns (Christopher Walken). An ex-loan shark, Shondor runs a restaurant as a front for other operations. Danny tries joining in the business, but things quickly devolve, and Danny returns to his violent ways.

When the opportunity is presented to carve out mob territory for himself again, Danny goes against his parole and works to unionize Cleveland’s 200 plus independent garbage collection contractors. It’s a job that forces him to sacrifice old friendships and get a lot more blood on his hands, not to mention a tail from the police.

In a last bid to consolidate his new turf power, Danny sends one of his own men to his death, setting off a car bomb, killing the young man and sealing Danny’s return to the mob. Soon, Danny’s wife moves out with their three children.

Still working the restaurant angle, Danny hooks up with a young girl who becomes his live-in girlfriend. He’s living a lesser life, though, and he seems to know it.

Returning home one day, Danny rescues his tough elderly Irish neighbor from eviction. She gratefully invites him inside, where she tells him of her father’s legacy, speaking of the luck of the Irish as “the grace of God on your shoulder,” and later telling Danny, “I see goodness in you.” When she offers him the gift of a gold cross necklace that was her father’s, Danny receives it reluctantly. “There’s no good in me,” he confesses.

At this point, Danny becomes the “Robin Hood of Collingwood”. Robbing the rich, giving to the poor. He tries to go straight, for real this time. He wants to open a restaurant of his own. When Shandor offers to help him find financing, he has no idea the money is coming from the Gambino crime family. When the courier for the money is arrested and the money confiscated, Danny is held responsible even though he never received the $70,000. Danny refuses to pay Shandor and soon his “straight” life falls apart. Now threatened with assassination by the Gambinos and their powerful friends, he goes on the assault, killing Shandor and then assuming Shandors mob turf.

A bloody turf war ensues. The question of the movie then becomes, Will Danny survive the violent life of crime he’s established for himself?

The direction in KILL THE IRISHMAN is often uneven. It misses numerous beats in the story. The lead actor, Ray Stevenson, gives a strangely stoic, unconvincing, disappointing performance devoid of emotional complexity. The overall production value is limited by the budget, but is adequate.

Because of poor direction and the lead’s poor performance, the story quickly becomes tedious since the audience fails to connect with the protagonist. There are a few positive moments in the character’s development, but they are quickly undermined by a self-destructive descent into blood, violence and crime.

The story does loosely follow a Christian worldview, showing the utter destruction of a violent, criminal life. However, in spite of some wonderful secondary performances from the likes of Christopher Walken, Val Kilmer and Paul Sorvino, KILL THE IRISHMAN is just plain disappointing and fails to present a really powerful movie.