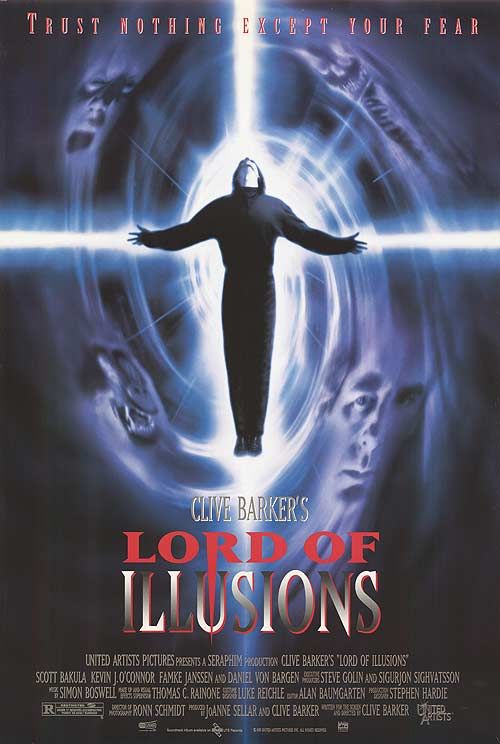 LORD OF ILLUSIONS is set totally on the premise of evil, occultic magic. When an evil magician called The Puritan attempts world domination, a detective and his team come to stop him with many horrifying encounters. Filled with violence and the occult, this film has no redeeming value and, in fact, may severely disturb those with sensitive spirits.

LORD OF ILLUSIONS is the latest installment in Clive Barker’s horror movie series. It is set totally on the premise of evil magic. A cult leader called “The Puritan” prepares to sacrifice a young girl in some satanic rite to increase his power and become a god. A team of renegades attack the complex to free the girl and evidently stop the fiendish work of their former master. The renegade party is able to bind him and contain him. When an albino student of the Puritan attempts to free him, a detective goes on the chase to stop the albino so that the Puritan will not be loosed to create more havoc. In a dramatic and horrifying climax, the detective ends up the hero, and the Puritan ends up being sent to a very literal Hell.

Aside from an attack on dedicated Christians, there are so many perversions of scripture and blasphemies in this movie you cannot even count them. This film is filled with satanic principles and an overwhelming sense of the occult. The only real references to God are how men long to become gods. The primary deception is that mortal man, through magic, can become immortal and have the power to become god. This film is an atrocity and an affront to all that is sacred, scriptural and holy.