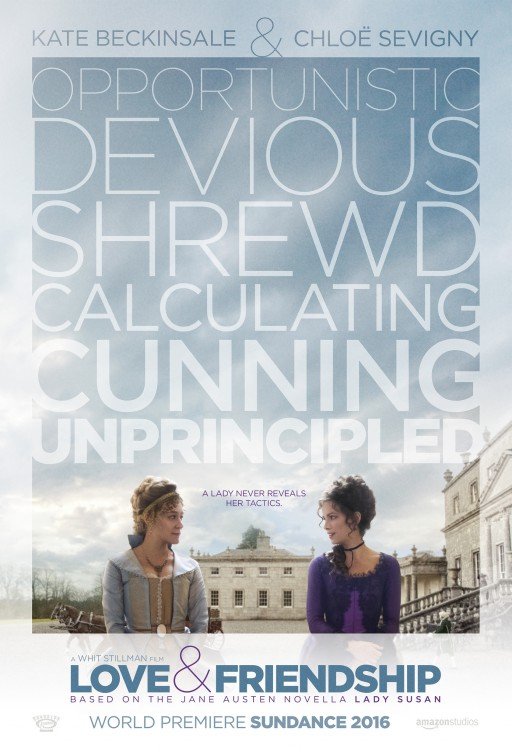 LOVE & FRIENDSHIP is based on Jane Austen’s book LADY SUSAN, a story about a manipulative woman who tries to convince multiple men to marry her. Recently widowed, Lady Susan moves in with her in-laws to meet an eligible young man, Reginald DeCourcy. When the young man falls for Lady Susan, though she’s much older, Reginald’s sister gets concerned. Meanwhile, Susan’s daughter, Frederica, comes to stay at the house too, so Reginald’s sister is interested in matching Frederica instead of Susan with her brother.

LOVE & FRIENDSHIP has some funny and entertaining moments, but suffers from some bad lighting, bad acting and a somewhat boring storyline. The character Lady Susan is very manipulative and mostly gets away with it, including having multiple, implied adulterous affairs with married men. LOVE & FRIENDSHIP is an early attempt by Amazon Studios to produce their own movie content. Sadly, they don’t do a spectacular job. One of the biggest problems is the storyline doesn’t have a beginning, middle and an end. This results in too much boredom for any moviegoer who might see LOVE & FRIENDSHIP.

(RoRo, C, B, Ab, L, S, A, MM) Strong Romantic worldview as one character manipulates others and often gets her way and gets away with way too much, with some Christian, biblical, moral elements such as Bible verses mentioned and teenage girl goes to a priest for advice, but main female villain misquotes Bible verses to get her way and is too self-absorbed to care for her daughter; one light obscenity; no violence; women has implied affairs with married men; no nudity; light drinking; no smoking or drugs; and, lying, greed and manipulation.

LOVE & FRIENDSHIP is based on Jane Austen’s book Lady Susan, about a manipulative woman who tries to convince multiple men to marry her. LOVE & FRIENDSHIP is an Amazon Studios production, with poor quality and a somewhat boring storyline, but some funny elements.

Recently widowed, Lady Susan Vernon decides to stay at her in-laws because she says she has no place for herself. When she arrives at her in-laws, she surprises them. There is a young man there, named Reginald, who Lady Susan decides to take on walks and get to know. Though Reginald is much younger then Lady Susan, he becomes infatuated with her. Reginald’s sister, Catherine Vernon, can see through Lady Susan, but doesn’t seem to know how to pull Reginald out of her power.

One day Lady Susan’s daughter, Frederica, comes home from school. She has run away from her school because she has no friends there. Frederica is a sweet girl, but her mother doesn’t care for her because she’s fully consumed with herself and money. The in-laws, Catherine and Justin, see all this, and they want to help and provide for Frederica.

Instead, however, Lady Susan has given her daughter an extremely silly suitor, Sir James Martin. Frederica is saddened she must marry a man with such very little intelligence, but she’s too fearful of her mother to say anything. When Frederica does tell her Aunt Catherine, Lady Susan finds out and drama ensues.

LOVE & FRIENDSHIP is based on Jane Austen’s LADY SUSAN. Though the book and movie have a light morality tale, the main offending character receives very little judgment, and so the worldview is more Romantic than moral. The character Lady Susan is very manipulative and mostly gets away with it, including having multiple, implied adulterous affairs with married men. Also, Lady Susan often quotes Bible verses inaccurately to get her way. Her daughter, however, listens to her and is an honorary, loving and kind girl who’s eventually rewarded.

LOVE & FRIENDSHIP is one of the early attempts for Amazon Studios to produce their own content. Sadly, they don’t do a spectacular job. One of the biggest problems is the storyline doesn’t have a beginning, middle and end. This problem leads to a fair amount of boredom. Also, the lighting is off at points, and there’s some overacting, perhaps a result of bad direction from Whit Stillman. All that said, LOVE & FRIENDSHIP isn’t a total miss. Some parts are entertaining and funny.