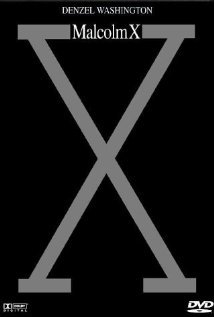 MALCOLM X tells the life story of the visionary black leader, from poor child to scheming criminal to white-bashing spokesperson for the Nation of Islam to humanist espousing harmony and unity. Unfortunately, the movie offers an confused evangelistic plea, hailing MALCOLM X as the messiah. In an offhanded way, this revisionist, romanticized portrait attempts to make Malcolm's beliefs and cause appealing to everyone. Thus, careful discernment and frequent leg stretching are musts for this three-hour movie.

MALCOLM X tells the life story of the visionary black leader, from poor child to scheming criminal to white-bashing spokesperson for the Nation of Islam to humanist espousing harmony and unity. Malcolm grows up in poverty during the 1920’s in Lansing, Michigan. The death of his father lands his mother in a mental institution. In foster care, Malcolm thrives academically. However, discouraged by bigotry, Malcolm becomes involved with drugs, alcohol, theft, and fornication. Eventually, he is sentenced to 8 to 10 years. His breakthrough in prison comes after receiving letters from “The Honorable Elijah Muhammad, the Messenger of Islam.” Malcolm finishes his prison term and begins preaching. Ironically, the movie portrays Malcolm as a kind, loving, sensitive man who is just as concerned with racial equality as he is with spreading the message of Allah.

MALCOLM X overlooks the sinfulness of man and the need for Divine intervention. Instead of God’s plan, the movie offers an confused evangelistic plea, hailing MALCOLM X as the messiah. It ends with little children around the world declaring: “I am Malcolm X!” In an offhanded way, the film’s revisionist, romanticized portrait attempts to make his beliefs appealing to everyone. Careful discernment and frequent leg stretching are musts for the three hour long MALCOLM X. Although well-crafted, the movie will confuse those who have not read THE AUTOBIOGRAPHY OF MALCOLM X.

Producer: Arnold Perl, Spike Lee BASED ON THE NOVEL: THE AUTOBIOGRAPHY OF MALCOLM X by Alex Haley, Malcolm X.