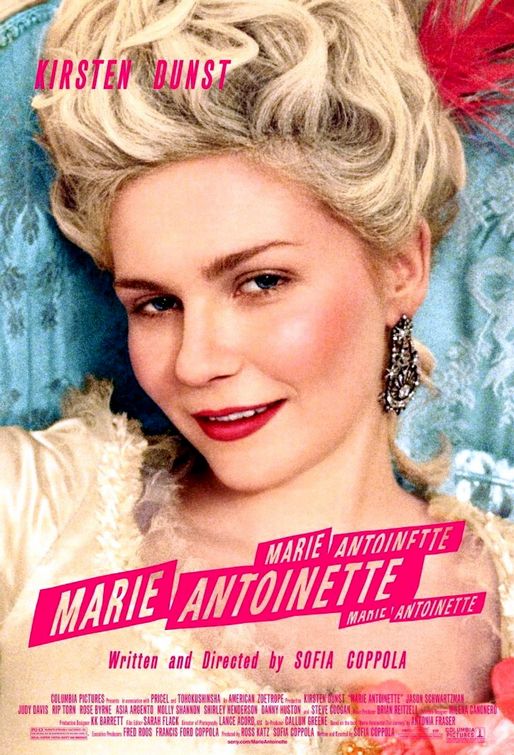 MARIE ANTOINETTE opens with loud contemporary rock music. A semi-nude Kirsten Dunst looks knowingly at the camera while getting her toenails done. At the tender age of 14, Marie is shipped off to France in 1770 to marry Louis XVI. The movie is very episodic. The episodes are punctuated by voyeuristic tableaus portraying Marie Antoinette doing mundane things. The first episode concerns King Louis and Marie's inability to have a child for seven years, which upsets everyone, especially Marie's mother. The second episode concerns her sexual awakening with a Swedish nobleman and her frolicking at loud parties in Versailles and Paris. The third episode concerns the overthrow of the French monarchy in 1789. It ends abruptly with the royal couple being driven out of Versailles.

MARIE ANTOINETTE is one of the most boring, tedious, and poorly made historical movies. It is not evil, but it is dramatically pathetic. The dialogue is static, and there is no sense of coherent story, plot, character, or jeopardy. It is amazing that Sofia Coppola could trivialize this great story, while the director of THE QUEEN turned a brief moment in history into a great story.

(RoRoRo, CC, B, L, V, SS, NN, AAA, DD, M) Very strong Romantic worldview referencing Jean-Jacques Rousseau, some church scenes that are very uncomfortable and one positive reference to God; three profanities, lots of sex talk but not as crude as it could have been; no violence but threats of violence by peasants storming Versailles; adultery, depicted sex and reference to oral sex; full rear female nudity, reclining female nudity and upper female nudity but woman covers her naked breasts with her hands and private parts are always hidden; drinking to excess; snorting cocaine and smoking hash; and, cynicism and deception.

MARIE ANTOINETTE is one of the most boring, tedious, poorly made historical movies of all time. It is not evil, but it is dramatically pathetic. The press notes said Sofia Coppola wanted to bring history alive; instead, she kills the history of Marie Antoinette and the fall of the French monarchy.

The movie opens with bland credits accompanied by loud contemporary music. Classical music, contemporary music, pop, and heavy metal music are interspersed throughout the movie as well as several other styles. In a nod to French symbolism and contemporary self-consciousness, a semi-nude Kirsten Dunst looks knowingly at the camera while getting her toenails done.

The movie tediously moves on to the faltering story where Marie Antoinette ‘s mother tells her 14-year-old daughter that she is going to France to marry Louis XVI. When Marie Antoinette gets to the French border, she has to give up all that she has, including her pet, and change into a completely new French outfit. She is told that everywhere she goes she will be watched: watched in her wedding bed, watched while having her child, and watched when she eats. She is the reality TV show of her day.

Louis is inept and shy to the extreme. It takes him seven years before he has sex with Marie, perhaps because everybody is watching. Louis’ father is a satyr, a lecherous man who continually has sexual moments with Madame du Barrey.

The movie is very episodic, and the episodes are punctuated by tableaus portraying Marie Antoinette lying down in the same spot two or three times, taking a bath, eating with Louis, and changing her clothes while everybody watches. The audience is part of the crowd of royal watchers of these static tableaus.

The first episode concerns Louis and Marie’s inability to have a child for seven years, which upsets everyone, especially Marie’s mother. The second episode concerns her sexual awakening with a Swedish nobleman and her frolicking at loud parties in Versailles and Paris. The third episode concerns the overthrow of the monarchy, ending abruptly with the royal couple being driven out of Versailles.

This movie takes an extreme act of will to watch. The promotion for it is like the Emperor’s new clothes. Claims are made which have no reality. Kirsten Dunst does such a good job that she almost holds the movie together. Everyone else is just window dressing on the voyeuristic set.

Not only is the movie’s music eclectic, jarring and glaring, but the accents are expressed in voices as disparate as Australia to Texas to California to England. Evidently, this was on purpose. There’s a lot of alcohol drinking, a lot of sexual innuendo, snorting cocaine, and smoking opium. This is the party life going awry. The dialogue is static. There is no sense of coherent story, plot, character, or jeopardy. This movie is reminiscent of BARRY LYNDON, or some of the 1970’s historically inclined acid movies.

Somebody should take Sofia Coppola aside and instruct her about story, but since she is one of the Hollywood royalty, it is doubtful someone will do that. It is amazing that Sofia Coppola could take the great story of the fall of the French monarchy and trivialize it, while Stephen Frears, the director of THE QUEEN, turned a moment in history into a great story.