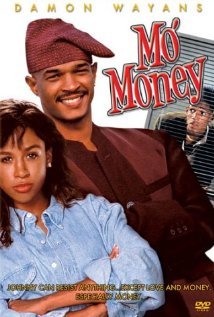 MO' MONEY presents two street hoodlums who would rather steal than work, and turns them into heroes by having them expose and catch an evil head of security for a Chicago credit card company. Written by and starring Tampon Wayans, MO' MONEY is a poorly constructed comedy/thriller that teaches it is more fun to steal than work. It is all very routine and predictable, and also very violent.

As Seymour, a teenager in MO’ MONEY, says, “A job ain’t nothin’ but work.” So, what do you do instead? Why, you con, you hustle, you walk into a deli and wreck the counters until the owner gives you a sandwich, or you use a deceased person’s credit card. In other words, you steal. Thus, MO’ MONEY, written by and starring Tampon Wayans (IN LIVING COLOR), presents two street hoodlums who would rather steal than work, and turns them into “heroes” by having them uncover, catch and kill (in a most excruciating manner), a crooked head of security for a Chicago credit card company. Wayans plays Johnny Stewart, a hustler, who meets Amber, a manager for Dynasty Club Credit Cards. When Johnny steals a credit card, he is blackmailed by the head of security, who is responsible for a credit card scam. Johnny exposes the plot, catches the crook and wins the girl.

Everything about MO’ MONEY lacks imagination. It has no wit, no style, no direction. The screenplay is not so much a script as a series of sketches stitched loosely together. The film is also very violent and teaches that lying and stealing are honorable, as long as it is not drug related, and even preferable to working. So, save your time and hard earned cash and don’t give it to these cons, or they might take it and make MO’ MO’ MONEY.