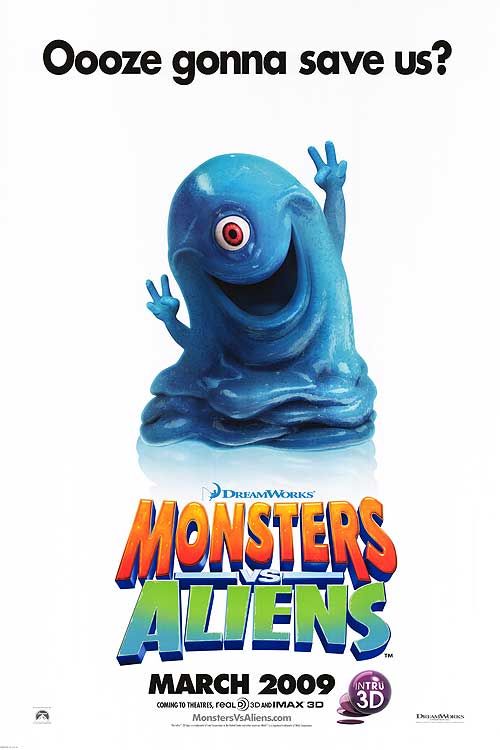 MONSTERS VS. ALIENS is an action-packed animated spoof of 1950s science fiction movies, in eye-popping 3-D. After being hit with energy from a meteor hurtling toward earth, Susan Murphy grows to 50 feet tall just when she’s about to get married at the altar. The military springs into action, placing Susan into a secret government compound. There, the crazy general running the facility renames her Ginormica and incarcerates her with a ragtag group of monsters, including the insect-headed Dr. Cockroach, a walking amphibian named The Missing Link, a blob named Bob, and a 350-foot caterpillar named Insectosaurus. When a giant alien robot comes looking for the energy that transformed Susan, the government enlists Susan and the monsters to fight it.

The fun – and the comedy – never lets up in MONSTERS VS. ALIENS. In fact, this is one of the more exciting animated movies from DreamWorks. There is plenty of action violence, and some offbeat moments. Eventually, Susan learns to embrace her transformation and risks her own life to rescue her friends and Earth from the tyrannical alien who sent the giant robot. Except for little children, families will enjoy MONSTERS VS. ALIENS.

(BBB, CC, PP, ACAC, Ro, Fe, Ev, L, VV, M) Very strong moral worldview with strong Christian, redemptive elements (including a reference to prayer), positive American qualities and ideals, and strong Anti-Communist message implied, plus, however, Romantic and feminist elements, and evolution talk about being a Missing Link; no obscenities and two light profanities, one during a song; strong action and comic violence such as people and creatures in jeopardy, aliens shot with laser guns, explosions, buildings and large objects destroyed, meteor lands, almost killing young woman; no sex; no nudity; no alcohol; no smoking; and, ambiguous message about marriage and asexual blob creature with male voice first talks about romance with friend’s fiancé then talks about romance with a Jell-O desert, which he refers to as a she.

MONSTERS VS. ALIENS is an action-packed animated spoof from DreamWorks Animation and Paramount Pictures of 1950s science fiction movies, in eye-popping 3-D.

The action comedy begins right away when a mysterious, glowing meteor plummets to earth. The meteor strikes virtually on top of Susan Murphy, who’s just about to get married to Derek, a conceited weather anchorman. Just before the wedding ceremony begins, Susan starts glowing. And growing! Until she reaches 50 feet tall and her hair turns white!

A cadre of soldiers suddenly appears looking for the meteor. They tie Susan down and knock her out with a huge syringe.

Susan wakes up in a huge prison, where a crazy general named W.R. Monger has imprisoned several other monsters, including a giant caterpillar named Insectosaurus, a mad scientist who’s turned himself into a cockroach, a reptile man called The Missing Link, and a blob of blue goo called B.O.B., short for an unpronounceable chemical. Susan is renamed Ginormica and confined to the prison.

Several weeks later, a giant robot lands on Earth, sent by the evil alien squid named Galaxhar, who’s looking for the energy in the meteor that transformed Susan. The robot begins storming around the country. General Monger convinces the president to send his monsters to defeat the robot and save the world from imminent destruction. Neither Susan nor her newfound friends are prepared for this battle.

The fun – and the comedy – never lets up in MONSTERS VS. ALIENS. In fact, this is one of the more exciting animated movies from DreamWorks. There is plenty of action violence, however, and some offbeat moments. There is also a feminist message, but not in a radical way that hits viewers over the head. For example, through her experience, Susan learns how to be her own independent woman. Even so, this message of independence is not meant just for females, but is part of the movie’s theme that people should embrace those qualities that make them unique and different. In that sense, the message conveys the tried-and-true American ideal of individual independence and responsibility.

This message comes out particularly strong when [spoiler alert] the self-involved Galaxhar starts cloning himself in massive quantities as part of his totalitarian invasion of earth. In the end, the monsters work together to defeat this wannabe dictator’s evil plans, but, ultimately, it is Susan’s inner strength, both physical and non-physical, that inspires the other monsters and saves the day. Susan risks her own life to rescue her friends and Earth from the tyrannical alien and his evil plans.

Rent or Buy MONSTERS VS. ALIENS: