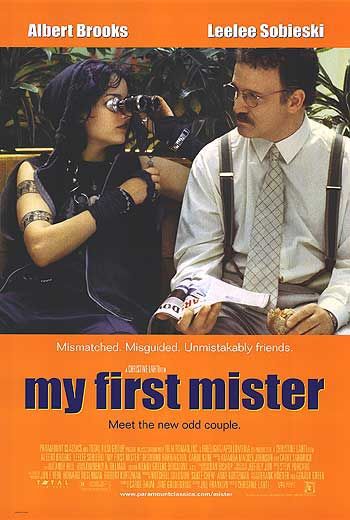 MY FIRST MISTER tells about Jennifer (“J”) Wilson, a depressed, friendless, gothic high school senior. She asks 50-year-old Randall (“R”) Harris (Albert Brooks) for a job in his clothing store, and he tells her he’ll try her out in the stock room if she can come back without the scary attire. Intrigued with the first man to be kind to her and interested in her welfare, she accepts. As J gets to know R, she challenges his boring life, filled with routine, not relationships. R asks her why her arm is covered in small burns, and she answers, “Lack of alternatives.” The unusual friendship escalates until J finds out R has a disease he’s been keeping from her. She is furious. J soon uncovers some interesting proof of R’s past, and makes a decision to right a few wrongs in his life. Though challenging and painful, she sets out to heal the wounds in her friend’s life and write a powerful last chapter in his life.

Though a hard-hitting look at life’s pain without good fathers, the movie it overwrought with intense foul language, occult necromancy and sexual themes, rendering it unacceptable for all viewers.

MY FIRST MISTER is the story of 17-year-old Jennifer (“J”) Wilson (Leelee Sobieski), a depressed, friendless high school senior, fully enmeshed in the gothic lifestyle. She lives at home with her ditzy mom, played by Carol Kane, and her stepfather, Bob (Michale McKean). After being fired from her fringe employment, she begins to hunt for a mainstream job. Fully dressed in black gothic attire, she asks 50-year-old Randall (“R”) Harris (Albert Brooks) for a job in his upscale, Brooks Bros. clothing store in the mall. He shoos her away and asks her not to frighten his customers. Then, turning with a hint of interest and compassion, he tells her he’ll try her out in the stock room if she can come back without the scary attire.

Intrigued with her employer, the first man to be kind to her and interested in her welfare, she forces herself to shed the rebellious look and try out the new job. In narration style, J tells us that her piercings are just “adorning her face where a smile used to be.” When her jewelry is off, she feels naked again. Brooks helps her dress in a preppy outfit, and she comments, with disdain, that she looks like a Republican.

As J gets to know R, she notices and comments on the fact that he “has magazines, not people” in his life. She challenges his boring life, which is filled with routine, rather than relationships. R challenges J and gently asks her why her arm is covered in small burns (self-mutilation). She answers, “Lack of alternatives.” R promises to start trusting J if she’ll promise never to hurt herself again. J says she gets to ask for a promise later.

As their friendship continues through the weeks, R takes J to go apartment hunting. When the landlady looks suspiciously at J, R tells the lady that J is simply in a phase . . . that she’s a deep poet and will be famous some day. He insists that J will someday even know Regis Philbin and have him over to the apartment. The landlady quickly agrees to take J.

J, the narrator, reveals that she doesn’t have emotion – no hate, no love, nothing. She visits her gross drug and alcohol-abusing father, Benjamin (John Goodman), and she asks him, “Is there anything you know about me?” He replies, “I know that you hate me, and I know I don’t blame you for it . . . But I deserve respect.” She asks, “Why should I respect you?” It is a question to which he does not have a reply.

J and R continue to connect as friends, and J convinces R to get a tattoo. He almost does. She takes him to a gothic bar and asks, quite crudely, if the evening is to be followed by sex. R coughs and chokes, then tells her that he’s old enough to be her father. She says, “I don’t want another dad. I don’t even like the one I have now! I want a lover!” R asks J to reconsider her continual use of the “F” word.

One day, a red-headed woman comes to visit R. J gets extremely jealous and proceeds to place some mannequins in a compromising position, donning them with tattoos and piercings. R is furious. He yells at J, “I trusted you. I extended my friendship, and you just stepped on it!” Soon thereafter he says, “We can’t be friends. I don’t have in me what you need. I’m old!” J asks what he’s afraid of. He rattles off a long list of fears.

J takes R to a gravesite to “visit grandma.” There, she teaches him to lean back on the gravestone and “feel the energy” of the dead person. He does feel it and is happy. He tells J she’s beautiful. He lets her stay the night at his house, but they sleep in different rooms. In the morning, R wanders off and passes out. J finds him and brings him to the hospital. She finds out he has a disease he’s been keeping from her, and she’s furious.

She goes back to his place, finds some interesting proof of his past, and makes a decision to try and right a few wrongs in his life. Though challenging and painful, and requiring her to look past her own needs, she sets out to heal the wounds in her friend’s life and write a powerful last chapter in his life.

At a dinner at the end, J gives a toast to all the “F” words: Friends, family, fate, forgiveness, and forever. She says, “The man who first touched me touched me with his heart. To ‘my first mister.’”

Just like HEARTS IN ATLANTIS and LIFE AS A HOUSE, this movie screams out the cry of every heart: “I want(ed) a good daddy!” Every man, woman and child on this earth has shaped his or her opinion of God and life through the lens of the love, or lack of love, of a father. It cannot be understated that the love and attention of faithful fathers is what is missing in our society. The writers in Hollywood have heard this “cri de coeur,” or cry of the heart, but, tragically, their answer is wrong.

The answer is not communion with the dead, or finding a surrogate father/friend. It’s not piercings, rebelliousness, gothic dress, or keeping a journal. There is a God-shaped vacuum in the heart of every soul, and only a personal relationship with Jesus Christ can fill the void. Where the earthly father has been absent or poor, the heavenly Father extends healing through His son’s finished work on the cross. God offers forgiveness and restoration to all who seek Him.

Because of the excessively strong foul language, sexual themes and depictions, and touting of necromancy in this film, MY FIRST MISTER is unacceptable viewing. The father theme is timely and hard-hitting, but the end does not justify the means. For writers who are so wise in capturing deep themes, they prove to be equally lazy in their speech. Using the profane and obscene does not paint a clearer picture; it simply reveals the shortcuts of those who will not take the time to search out beautiful, descriptive language found in every thesaurus.