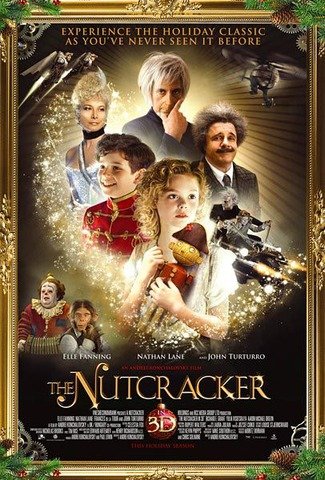 Set in 1920s Vienna, THE NUTCRACKER IN 3D is a modern re-telling of the famous Christmastime ballet by the Russian composer Tchaikovsky, about a girl and a prince fighting the evil Rat King and his minions. Fanciful stories from her Uncle Albert causes a neglected young girl, Mary, to enter a world of dreams where there’s a prince enchanted into being a nutcracker toy and battles with the evil Rat King and his soldiers. Eventually, Mary and her friends must rescue the nutcracker prince before the Rat King destroys him with all the other toys in the furnaces. Also, Mary’s brother, Max, is pitted against Mary.

What starts out as a fresh take on an old story that is intriguing and with enormously creative vision, soon seems to flounder under its own weight. The lyrics of Tim Rice fall short, the story itself is structurally awkward and feels contrived at many points until finally it just becomes tedious and a little self-important. Also, the 3D doesn’t add much. Ultimately, despite some good acting, impressive production values and a positive resolution, THE NUTCRACKER IN 3D is too dark for younger children.

(Ro, O, FR, B, C, L, M) Light Romantic, magical worldview with some witchcraft casting spells and some lyrics carrying confusing worldview messages such as the song, “It’s All Relative,” which seems to perpetuate situational ethics, only to be retracted at end of the movie with a refrain, plus some moral elements and references to Christmas; one obscenity and one light profanity; light violence includes man cracks open a walnut with another mans forehead, Rat Queen bites her son on the ear, Rat King snaps off head of living toy drummer boy and throws it around, Ratman gets fist in face, another gets hit in face with a shovel, and fighting between soldiers; no sexual content; no nudity; Housekeeper shown intoxicated, but no drinking shown; smoking cigars; and, kidnapping, moral relativism, man says reality is an illusion, and partially negative parental figures, though resolved in the end.

THE NUTCCRACKER IN 3D is not your mother’s “Nutcracker,” the famous ballet by the Russian composer Tchaikovsky. First, there’s no ballet here. Rather, a narrative story unfolds.

It’s 1920s Vienna, and Albert Einstein is a fuzzy old uncle filling the heads of niece and nephew Mary and Max with stories of fairy tales and imagination, much to the dismay of their father and mother, who are more interested in practical things, like social status. It’s Christmas and the mother, rather than being at home with her children, leaves them with the colorful Uncle Albert (Nathan Lane) and their sometime alcoholic housekeeper in order to take advantage of her big chance to sing in front of some important people at an event that evening.

Uncle Albert arrives late, only just catching the parents as they head out for their society evening. Albert, later revealed to be Einstein, brings gifts for the children, one of which is a massive dollhouse, home to tiny animated toys. He also gives to Mary a wooden nutcracker, whom he lovingly refers to as “NC”. Shortly, the younger Max manages to break the Nutcracker’s jaw with an overzealous attempt at cracking too many nuts. And, a divide is created between the two children, Mary, who believes with imagination, and Max, the “breaker of toys,” who does not.

The Tchaikovsky melody becomes the orchestration for a song and dance number, as Uncle Albert tucks in the children. With the lyrics of Tim Rice, full of optimism and “just believe” rhetoric, the children finally are to bed, and Mary enters the world of dreams. Here, she finds her Nutcracker has come to life! Preferring to be called “NC,” the nutcracker leads Mary into her own house, now enormous in size. In the living room, the ceiling is gone and the family Christmas tree now reaches through to the stars.

There, she meets NC’s companions in Uncle Albert’s Dollhouse. What ensues is a magical introduction to their world. NC gives her the royal tour, meeting the Snow Fairy Princess who looks just like her mother. She dances with snow fairies and learns she can fly.

Because she begins to believe in this world, NC is able to become his true self, becoming like Pinocchio, a “real boy” once again. The frivolities are cut short when soldiers of the infamous Rat King appear, and their dogs that fell the Christmas tree to the ground. There is a battle brewing, and NC and his friends are mounting an offensive to take back their city, which is now under the cruel power of the Rat King.

Slowly, a story emerges. NC is actually a young prince who was placed under a curse by the Rat King’s mother, turning him into the wooden nutcracker. The Rat King cannot live in sunlight, so he burns toys to create smoke that will block out the sun and enable his iron-fisted rule. When the Rat King learns that the spell over NC has been broken, his armies are on alert.

Just as we are about to begin the offensive, morning comes and the dream is broken. Now, Mary must wrestle with the real world in which her parents find the Christmas tree chopped down and refuse to believe her fantastical account of how it happened.

Soon, night falls again, however, and this time Max finds himself in the dream world with Mary. Max meets the Rat King (played by John Turtorro) and is intrigued by the dark world he rules, becoming his protégé. So, brother and sister are pitted against each other as a battle ensues to free NC and his city.

Having learned that her spell over NC has been broken, the Rat King’s mother reasserts the spell, causing NC to once again become the wooden nutcracker. Rat soldiers kidnap NC and take him away to a dungeon. So, now Mary and the rest of her friends must rescue him before he is destroyed with all the other toys in the furnaces. Mary reaches NC just as he is about to be destroyed, rescuing him from the furnace only to find him seemingly dead. Representing true love and belief, she cries, and her tears splash on NC, resurrecting him and once again breaking the wicked Rat Queen’s curse.

What starts out as a fresh take on an old story that is intriguing and with enormously creative vision, soon seems to flounder under its own weight. The lyrics of Tim Rice fall short, the story itself is structurally awkward and feels cliché and contrived at many points until finally it just becomes tedious and a little self-important. The 3D serves no real purpose here, as most of the movie doesn’t really use it much. The direction is also very dark. NC, the primary character, is given a different voice when under the spell, a harsh and unpleasant voice completely unlike the real boy when the spell is broken. Which is most unfortunate, because the real boy offers a very warm and endearing performance. The other voice distances and confuses the audience.

The end effect of all this is the audience ceases to care for these characters as much as they might. All the child actor performances are completely top notch. The overall creative vision is actually impressive, even if in the end it seems to fail by missing its audience. Though there is a resolution in the end, the story nonetheless is just too dark and cannot be recommended for young children – a bizarre choice indeed for what’s supposed to be a Christmas movie.