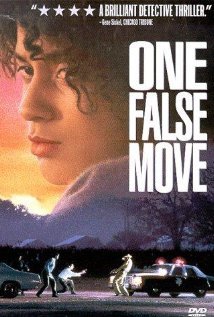 ONE FALSE MOVE is a tense cops-and-killers drama with a strong premise which is squandered on brutal violence, ear-splitting foul language and an disappointing finale. Instead of developing some interesting angles on culture shock and character conflict, this film derails itself with two-bit coincidence and unnecessary roughness.

ONE FALSE MOVE is a tense drama, spoiled by violence, foul language and a disappointing finale. It opens with a beautiful black woman named Fantasia, her foul-mouthed boyfriend, Ray, and the vicious Pluto savagely murdering a black family while searching for cash and cocaine. With drugs and $15,000 in hand, they take off. Hot in pursuit are two L.A. detectives, who figure out that the killers’ destination is Fantasia’s home town, Star City, Arkansas. Star City’s sheriff, Dale Dixon, is a good ol’ boy about to wade into a situation way over his head. This interesting setup withers away in the final half hour, as ONE FALSE MOVE makes a false move of its own: a distracting plot twist involving an affair between Fantasia and Dale years ago which (unbeknownst to him) produced a son. The subsequent shoot-out which leaves Fantasia and her cronies dead and Dale seriously wounded, wastes a choice opportunity.@@@Better films, such as WITNESS, have used the crime genre as a backdrop for fascinating observations about culture shock and character conflict. ONE FALSE MOVE could have done likewise, but instead derails itself with two-bit coincidence and unnecessary roughness.