"Demons, Death, and a Priest that Loses" 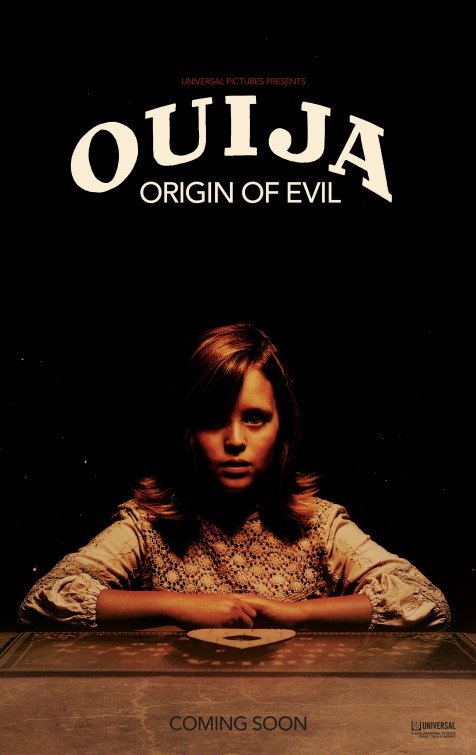 In OUIJA: ORIGIN OF EVIL, Alice Zander is a recent widow, raising two daughters, Lina and Doris. Tight finances threaten foreclosure of their family home. To make money, the three run a seance business, tricking clients into believing that they're really talking to dead relatives. Having used an Ouija board at a party, Lina suggests that her mother use one to spice up the seances and increase business. When nine-year-old Doris plays with the Ouija board, a demon attacks the family.

While OUIJA: ORIGIN OF EVIL has a few scares in the first half, it remains mostly about the family's financial struggles, peppered with some humor. As already mentioned, demonic possession plays a huge role in the plot. Using witchcraft to "help" people have closure with loved ones comes across as a disturbing premise. Ironically, the family be-lieves in God, heaven and praying, but they practice witchcraft, which the Bible explicitly forbids. It's not until the end that things get really violent, but what does occur is quite grotesque. Worse of all, evil wins at the end, making the movie abhorrent.

(OOO, AbAb, B, C, L, VVV, A, M) Heavy use of witchcraft, several scenes include seances, an Ouija game is used to summon demonic spirits which posses a girl and kill people, a girl prays to her dead father, praying to God is mentioned, heaven is mentioned, John 4:1 is quoted; girls attend a Catholic school, a priest investigates a girl's possession, though the demons win in the end; total of 9 obscenities and profanities; a girl is possessed by a demon in such a way that it brings physical pain, a girl describes vividly what it's like to be strangled, a story is told about people being chained down and having their tongues cut out, a room full of skeletons is found hidden behind a wall, demons pos-ses several people, a teenage boy is hung, a man threatens to kill with a knife, a demon makes a boy shoot himself with a rock in a slingshot, a girl chains her mother down and tries to kill her with a knife, a girl kills her younger sister, a daughter stabs her mother and kills her; some teenagers add alcohol to coffee they drink, a line mentions "hitting the bottle;" some children make fun of a little girl at school, a woman takes advantage of people by tricking them into thinking they can communicate with dead family members through a seance, a teenage girl sneaks out of the house at night to go to a party.

In OUIJA: ORIGIN OF EVIL, Alice Zander is a recent widow raising her two daughters Lina and Doris alone. They’ve been left with the family home, but tight fi-nances threaten foreclosure. In order to make money, the three run a seance business, tricking clients into believing that they’re really talking to dead loved ones. Using a few tricks of the trade, the client’s easily buy into the vibrating table, candles being mysteri-ously extinguished, and shadowy figures looming behind a backlit curtain. Lina goes too far during one seance and poses as a demonic spirit, frightening a man who believes it to be his dead wife. Alice scolds her daughter, who then sneaks out of the house after eve-ryone’s gone to bed.

Lina arrives at a friend’s house where a small party is underway. They all decide to play a game of Ouija for entertainment. It all turns out to be harmless fun, but it gives Lina an idea. The next day, she suggests that her mother use an Ouija board to spice up the se-ances and increase business. After all, the game is all the rage. Alice takes to the idea and rigs a store-bought Ouija board to move by itself. Nine year-old, Doris, decides to play around with it one night alone. She encounters strange voices and what appears to be a spirit. Later that night, she wakes up with a pain in her neck. As the pain increases, sev-eral demonic spirits enter her body, unbeknownst to her sister and mother.

At school, Doris begins to exhibit strange behaviors. She writes long essays in cursive Polish, which Lina finds and shows them to the school principle Father Tom. He is able to decipher the essays and decides to visit the Zander’s home to investigate. He agrees to participate in a seance to test Doris’ apparent powers. After seeing what he’s up against, he informs Alice and Lina that their house is built on top of a graveyard, and people had been brutally murdered in hidden rooms, about which Doris had written. They realize that they had broken the rules of Ouija by playing in a graveyard, and letting Doris play it alone. She’s now possessed by the dead spirits of those who had been killed. Father Tom tries to help them rid Doris of the spirits, but he soon finds himself over his head, and the entire household is engulfed in mortal danger.

While OUIJA: ORIGIN OF EVIL has a few jump scares in the first half of the movie, it remains mostly about the family’s financial struggles, peppered with some humor here and there. The suspense picks up a little in the second half, but doesn’t really get going until the last twenty minutes. Things quickly go from suspenseful to scary and grotesque. The movie suffers from the formulaic cliches of many horror movies, including demonic possession, a little girl as the victim and a catholic priest.

As already mentioned, demonic possession plays a huge role in the plot. Using witchcraft to “help” people have closure with loved ones comes across as a disturbing premise. Ironically, the family believes in God, heaven, and praying, but they practice witchcraft, something the Bible explicitly forbids. It’s not until the movie approaches the end that things get really violent, but what does occur is quite psychologically grotesque. People possessed by demons and go on a killing spree, and the possessions are very unsettling. Worst of all, the demons win in the end. There is a small amount of language, though nothing vulgar.