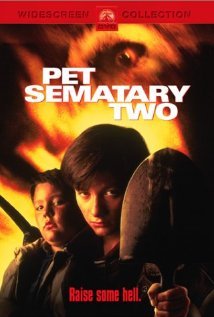 PET SEMATARY TWO is the story of two young boys who bring a dead dog and stepfather back to life with the occult power of an Indian burial ground. Burgeoning with blood, gore and occultism, PET SEMATARY TWO is a milestone in irresponsible filmmaking

Burgeoning with blood, gore, and occultism and admittedly aimed at young people, PET SEMATARY TWO is a milestone in irresponsible filmmaking. After young Jeff Matthews witnesses his mother being electrocuted to death, he and his father move to Maine. There, sheriff Gus shoots Drew’s dog Zowie. Drew takes Zowie to an Indian burial ground beyond the old Pet Cemetery. That night, a fiery-eyed Zowie returns to life. On Halloween night, Zowie almost chews Gus head off. The boys bury Gus, who returns that evening. Although the undead sheriff and dog are frighteningly unpredictable, Jeff becomes possessed with the idea that he could bring his mother back in the same way Gus and Zowie came back.

PET SEMATARY TWO is short on memorable acting, but has moments of chilling cinematography. Distortions of spiritual truth include a forgery of eternal life in which lifeless bodies walk the earth and fulfill their appetites. In addition, the death of Jesus is mocked in a noisy rock song. Only a demented sense of reality could explain making a film that includes rape, child abuse and occultism and then calling it a cautionary parable as the director has. This movie was made to cash in on the morbid fantasies of pre-teens who should be unable to breach its R-rating, and it is an insult to anyone’s intelligence to pretend that it has a redeeming message.