"Thoughtful and Beautifully Shot and Acted, but Sad" 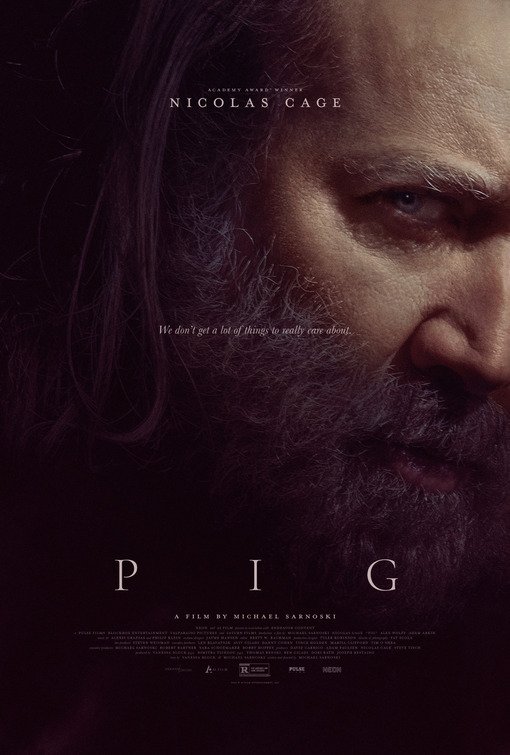 PIG is an independent drama with thriller qualities. It stars a bearded Nicolas Cage as a quiet loner named Robin Feld who lives alone with a beloved foraging pig deep in the Oregon wilderness. One night, some men beat up Robin and steal his pig. Robin enlists the help of a young food dealer named Amir, Robin’s only contact with the outside world. Amir takes Robin to his former cutthroat world of snooty restaurants in Portland. As Robin confronts his past, viewers slowly learn about his past life and what drove him to become a recluse.

PIG is a special, thoughtful, beautifully shot movie, with a stunning, appealing performance by Nicolas Cage. Cage immerses himself in the role of Robin, a quiet man alternately filled with wounded pain and righteous outrage. When he unleashes his frustrations, the effect is particularly powerful. The other performances are also excellent. PIG has some moral elements, but it’s set in a sad world of loss, grief and loneliness. MOVIEGIUDE® advises extreme caution for lots of strong obscenities, a few outbursts of violence and brief marijuana use.

(B, LL, VV, N, A, DD, M):
Dominant Worldview and Other Worldview Content/Elements:
Light moral worldview where a man confronts his former shallow world of fancy restaurants when he suffers a personal setback and material possessions don’t bring happiness, but set in a sad world where the man has lost his wife and only loves his foraging truffle-hunting pig, the pig is kidnapped, and he’ll do almost anything to get it back, and the man is just as sad and lonely at the end as at the beginning
Foul Language:
25 obscenities (mostly “f” words), but no profanities
Violence:
Some strong violence includes a brief attack from two intruders upon the protagonist as they steal his beloved pig, brief shot of an old man with his hands behind his back getting knocked out with a brutal punch from a younger man, another scene shows the protagonist being beaten for a full minute (the first three punches are seen connecting with his face, and the rest is implied, but this results in a very bruised and blood-stained face throughout the rest of the movie), the protagonist kicks a car strongly several times, the protagonist punches a man and steals his bicycle
Sex:
None
Nudity:
Upper male nudity images of a shirtless man
Alcohol Use:
Some wine and whiskey drinking
Smoking and/or Drug Use and Abuse:
No tobacco smoking, but one character smokes a marijuana cigarette in one scene; and,
Miscellaneous Immorality:
Intensely sad atmosphere throughout, the death of a woman is discussed (but not from what cause), and a pig and a bike are stolen.

Nicolas Cage is an Oscar-winning actor (for the nihilistic LEAVING LAS VEGAS), but in the 2000s he has mostly churned out one forgettable Z-grade thriller after another. However, his new movie PIG finds him back in compelling form, as a quiet loner named Robin Feld who lives alone with a beloved foraging pig deep in the Oregon wilderness until his pig is stolen, and he has to head to Portland to find it while also facing his own intensely sad past.

The movie opens on Robin’s quiet life in the woods, living alone in a shack with his pig and spending his days watching it forage for rare mushrooms that he later sells to a young food dealer named Amir (Alex Wolff), who is Robin’s only contact with the outside world. Robin is terribly unkempt and smells, but he doesn’t seem to care about anything but his pig.

Then one night the pig is kidnapped by intruders who knock Robin out. Robin enlists Amir in a desperate quest to find it while re-entering the world of Portland that he lived in until a decade ago when he was a top chef cooking with the extremely rare mushrooms his pig would find.

As Robin makes his way through one strange person from his past after another, viewers learn little by little about his past life and what drove him to become the messy recluse he is today. The combination of this carefully parceled information and the enormous uncertainty of his quest for the pig combine to turn this thoughtful, quiet film into a compelling mystery and a fascinating character study. Will Robin find the pig? Can he face his past and find happiness?

PIG a very special, thoughtful, beautifully shot movie. It’s an unusually quiet film, with Cage onscreen but not speaking for the movie’s first nine minutes or so. He fully immerses himself in the role of Robin, alternately filled with wounded pain and righteous outrage. So, when he unleashes his frustrations, the effect is particularly powerful because the movie has lulled viewers into thinking he’s a quiet man only.

Alex Wolff’s Amir is an effective sidekick to Robin throughout, serving as the audience’s perspective on the highly unpredictable events. As Amir’s father Darius, Adam Arkin also harbors intense emotions beneath a quiet surface, and he might hold the key to everything Robin wants to know.

However, due to a fair amount of strong foul language, a few outbursts of violence and brief marijuana use, MOVIEGIUDE® advises extreme caution. PIG is rated R and is aimed squarely at adults.