"Winning the Game of Love" 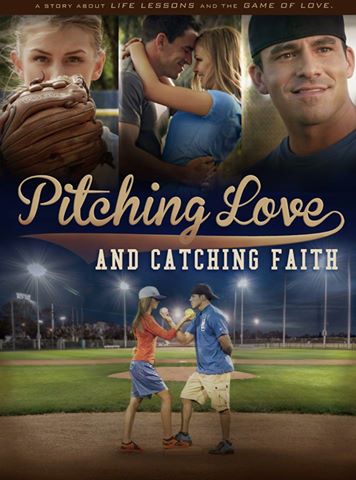 PITCHING LOVE AND CATCHING FAITH is a faith-based romantic comedy about a female softball player and a professional baseball player who cross paths. Because of moral decisions and past experiences, Tyler has decided to save his first kiss for when he falls in love. When Heather finds out Tyler’s never kissed anyone, her competitive side comes out. She’s determined to date him and steal his first kiss. In the meantime, the Angels baseball team drafts Tyler into the Major Leagues. Heather and Tyler have to overcome their different pasts to find true love.

(C, BB, N, M) Light Christian worldview with strong moral elements buy brief mentions of faith and Jesus; no foul language; no violence; some romance with a kiss at the end of the movie; two scenes with upper male nudity; no alcohol use; no smoking or drug use; and, some lying and immoral relationship decisions.

PITCHING LOVE AND CATCHING FAITH is a romantic comedy about a female softball player and a baseball player who cross paths.

Because of moral decisions and past experiences, Tyler has decided to save his first kiss for when he falls in love. When Heather finds out Tyler has never kissed anyone, her competitive side causes her to decide to date him and steal his first kiss. Tyler agrees to date her, when he gets drafted by the Angels into the Major Leagues, with the condition of keeping to a long-term commitment.

When Heather and Tyler begin their relationship, neither of them realizes the other’s hidden agenda. As they find out more about each other’s past, drama ensues. Tyler has to figure out if he wants to give up his baseball career for a girl he barely knows while Heather has to decide whether to give up her past for love or stay with what she already knows.

PITCHING LOVE AND CATCHING FAITH is somewhere between a faith-based movie and a secular romantic comedy. Throughout the entire movie, there are only two mentions of God or faith. The first is a “what would Jesus do” joke, and the second is when the main character Tyler is talking about his mom reading the Bible. When asked why he had never kissed anyone, Tyler and his sister both told a story about a pact he made with his friends when he was a child. The movie mentions having morals and making good decisions, but it doesn’t do enough to be considered a faith-based movie. With a subject as biblical as abstinence, this movie missed a great opportunity to talk about Godly relationships.

Along with the lack of faith in the movie, PITCHING LOVE AND CATCHING FAITH is confusing and mediocre. The editing of the movie also added to the confusion. There are several very random and unnecessary transitions between scenes. The audio throughout half of the movie is very obviously dubbed and distracts from the dialogue. The movie’s timeline is extremely disorienting and choppy. It’s never actually clear how much time has passed between scenes. In the middle of the movie, Tyler agrees to go on a date with his neighbor that same night. Between this scene and the scene where he goes on the date with his neighbor, there are several scenes which indicate one or more days has passed. This jumping in the timeline happens constantly. The confusing timeline distracts from the movie’s storyline, which is already very thin and confusing.

The whole movie’s premise is based on Heather trying to trick Tyler into kissing her, and Tyler dating Heather in order to get into the Major Leagues. By the end of the movie, Heather never has to deal with any consequences for her wrong intentions, and it’s never made clear whether Tyler gets to play professional baseball or not.

The movie’s dialogue is also very cheesy and sometimes hard to endure. Along with being cheesy, several comments made by the male characters come across as misogynistic and offensive. At one point in the beginning of the movie, for example, Tyler makes a comment about “leasing” a woman as if she were a car.

The relationship between Tyler and Heather isn’t believable, and the resolution seems to be sudden and not logical. The acting and chemistry between the main characters does more to make viewers dislike them than to feel sympathy for them.