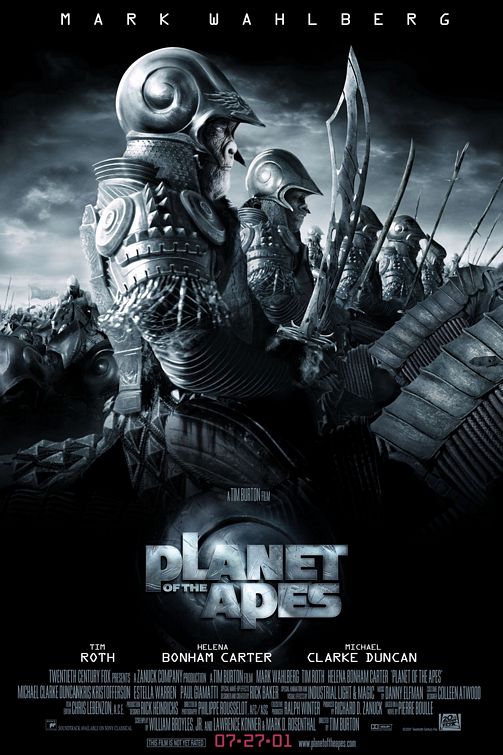 Mark Wahlberg stars in a remake of PLANET OF THE APES as an American astronaut who crash lands on a brutal, primal planet where apes are in charge and humans are hunted and enslaved by the tyrannical simians. Wahlberg plays Captain Leo Davidson. After Davidson is caught and enslaved himself, he befriends a female chimpanzee named Ari, played by Helena Bonham Carter. Ari wants to end the slavery of human beings, whom she sees as “separate, but equal” to the apes. A mad chimpanzee general named Thade, played extravagantly by Tim Roth, has other ideas.

PLANET OF THE APES has some beautiful special effects and some slick filmmaking, but it is plagued by plot holes, story inconsistencies and self-contradictions, poor dialogue, over the top acting, an abhorrent worldview, and a very weak hero and lead actor. The worldview that eventually takes shape during this movie reveals a materialistic, evolutionary viewpoint about parallel universes marred by biological confusion and an attempt to mock human society, especially prayer, faith, conservative economics, and the movement supporting gun ownership. The Twilight Zone ending will leave many people scratching their heads, because it is inane and poorly executed

With a lackluster summer movie slate, many people were looking forward to PLANET OF THE APES, which is a whole new approach to the novel that had already inspired several classic and not-so-classic movies. Having a MOVIEGUIDE® friend as a producer increased our anticipation. Regrettably, the movie is a mess. Some critics were booing, some critics were laughing, and at least one critic walked out of the press screening in Hollywood.

My friend, the late Gene Roddenberry, explained to me when we were working on a television program together that, even if you do the most far out science fiction, you must obey the rules that govern the universe you create and make it real by obeying those rules. Gene said that when he was setting up the first STAR TREK episode, they went so far as to scatter dust on the equipment and think through every single button and device to make sure that it had a purpose. PLANET OF THE APES throws all this preparation to the wind. It has some beautiful special effects and slick filmmaking, but it is plagued by plot holes, inconsistencies, self-contradictions, poor dialogue, over the top acting, a confused and ultimately bad or abhorrent worldview, and a very weak star, Mark Wahlberg.

Wahlberg (THE PERFECT STORM and BOOGIE NIGHTS) plays Captain Leo Davidson, an astronaut tending some genetically engineered space-monkey astronauts on a space station near Saturn. Davidson resents the fact that his commander won’t let human pilots explore things before they send out the monkeys. He takes a liking to one of the monkeys, a chimpanzee named Pericles. When Pericles goes out on a reconnaissance mission in a spacepod and gets caught in a strange, vicious space storm, Davidson disobeys direct orders and takes out another space pod to save Pericles. Soon, however, the storm sends Davidson’s ship into another part of outer space, or even a parallel universe or “multiverse.” He crash lands on a brutal, primal planet with two moons where apes are in charge and humans are hunted and enslaved.

After Davidson is caught and enslaved himself, he befriends a female chimpanzee named Ari, played by Helena Bonham Carter (FIGHT CLUB). Ari wants to end the slavery of human beings, whom she sees as “separate, but equal” to the apes. A mad chimpanzee ape named General Thade, played extravagantly by Tim Roth (ROB ROY), disagrees. Secretly, he wants the Simian Senate to declare martial law and allow him to wipe out all the humans, whom he sees as a big danger. Davidson, however, could care less about the politics on the Planet of the Apes. He just wants to get back to his space station and to Earth. Eventually, he is forced to help the humans obtain their freedom and perhaps even find some kind of peaceful co-existence with the apes.

Some of the inconsistencies in this story include the impossible fact that the plot reveals that, within a relatively short period of time, moderately sentient chimpanzees evolved into brilliant chimpanzees as well as into completely different primate species (apes, gorillas, orangutans, and baboons) within the limited lifetime of a group of human beings. The movie also expects viewers to believe that these simian creatures not only overcome genetically superior humans, but also build a city in the middle of a desolate desert. Any basic knowledge of Agriculture 101 understands that prior to mechanized transport cities were built where they could get food very easily – in walking distance. These simians build their culture without mechanized transport, in the middle of a parched sea bed, a long way away from any food sources. Furthermore, the food sources displayed in their banquet is not such as to be available in that type of region. Also, there are no dogs or cats and the local jungle doesn’t contain other animals, yet the apes rode trained horses. Where do the horses originate?

Of course, the point of most of the living arrangements and retro-feudalistic civilization built by the simians seems to be to mock and satirize human civilization. Pointed prayers to a mythic ancestor, politically correct discussions of conservative economics, racist posing, and slavery all seem to be a pointed attack at human beings. However, all of this ignores the basic situation in which these simians are found. Whereas the original movie had an internal coherence with the reversion of the human beings to less than animals, this one does not. One of the things the humans are blamed for is their technology and invention. Somehow, the movie thinks that the gun is a worse weapon than painfully clubbing somebody to death or stabbing them multiple times.

Another perplexing item is the fact that, unlike the original PLANET OF THE APES, the human beings here seem to be pretty articulate. It is hard to believe that such articulate beings would remain slaves for so long. After all, there are no left-wing, atheist, government-run schools teaching them how to be obedient sheep on this Planet of the Apes.

Thus, whoever put together the storyline must have been just as high on opiates or hallucinogenic drugs as the hooka smoking ape shown in the beginning. Pointedly, the production notes on PLANET OF THE APES from Twentieth Century Fox say hardly nothing about the production of the script and barely mention the names of the three scriptwriters who developed the story and the dialogue for the movie.

The worldview of PLANET OF THE APES owes a lot to Carl Sagan. At the time that I was director of the TV Center at City University of New York in the late 1970s, Carl Sagan was scoffed at for his shallow science, but he has become a guru to those who don’t think through the logical consequences of their epistemology. Sagan was a materialist, who tried to exclude God from the equation of Creation. As his work progressed, and it became clear to him that evolution would not support his theories, he developed the CONTACT theory, that some alien beings seeded the earth with sentient life. This theory, combined with steady state astronomy, assumes that intelligent life begets intelligent life and begs the First Cause argument for the existence of God developed by Christian philosopher and theologian Thomas Aquinas. When the CONTACT theory itself became tenuous, Sagan began to merge it with a multiverse ontology, where there are parallel universes or multiverses where the contact between universes does not have to obey the laws of physics. Thus, a second-rate, confusing Twilight Zone twist ends this lackluster version of PLANET OF THE APES. The Twilight Zone ending is preceded by a feeble deus ex machina climax eliminating God. These things combine with the attacks on prayer and faith to create the movie’s atheistic, evolutionary, science fiction worldview.

As one reviewer next to me said, this movie has no story and the star, Mark Wahlberg, formerly best known for dropping his pants onstage and modeling underwear for Calvin Klein, lacks any appeal. Tim Roth, who’s a terrific actor, is over the top as the mad General Thade. Helena Bonham Carter as Ari turns in a serviceable performance, as does most of the rest of the cast, but her makeup is terrible. The standout performance, however, is delivered by the wonderfully comical Paul Giamatti (THE NEGOTIATOR), who plays Limbo, an orangutan slave trader and con ape.

The materialistic, humanist worldview of PLANET OF THE APES also contains other kinds of confusion. For example, the movie implies that different species of apes or simians can mate with other different ape species. Furthermore, one of the female chimpanzees appears to have fully developed human breasts. There is also a nascent love affair between the human Captain Davidson and Ari the beautiful chimpanzee female (who looks more like a strange, ISLAND OF DR. MOREAU ape/human hybrid than she does a full chimpanzee). These elements are not just confusing, they distort the purity and scientific reality of God’s Creation and His Intelligent Design of the Universe.

All in all, MOVIEGUIDE® cannot really recommend a visit to this particular PLANET.