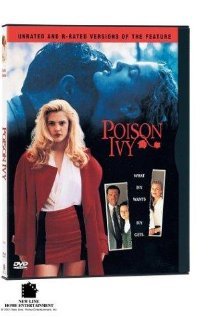 POISON IVY is a toxic little film about an extremely manipulative teenager (played by Drew Barrymore, light years distant from the sweet moppet we saw in ET) who invades a grossly dysfunctional family. Ivy is a seductive, dangerous parasite, and her sleazy maneuvers are no fun to watch.

Cross THE HAND THAT ROCKS THE CRADLE with LOLITA, and mix with raunchy language and sex–the result: POISON IVY, a toxic little film about a manipulative teenager invading a dysfunctional family. Drew Barrymore’s Ivy is a mix of flower child and harlot, and she catches the eye of Sylvia Cooper, a socially inept classmate. Coops needs a friend, and Ivy wants Coops’s stylish house. Ivy is a malignant force of nature, and Coops’s dysfunctional parents are no match for her. Georgie, the mom, is crippled by emphysema. Darryl, the dad, is a not-so-recovered alcoholic and sexually starved. Before long Georgie has a part-time nurse and Darryl has a sex partner. Unfortunately, Georgie catches her husband entwined with Ivy, who gives the invalid a shove off the balcony. Soon, Coops snaps to attention and gives Ivy a comeuppance.

POISON IVY has lots of style; however, all this technical skill is wasted on a pointless story. We have no idea why Ivy is such a bad seed, and we don’t squirm when Ivy takes over the Cooper household because they’re so out of kilter. Add to these deficits harsh language and sexual situations, and you have plenty of good reasons to avoid POISON IVY.