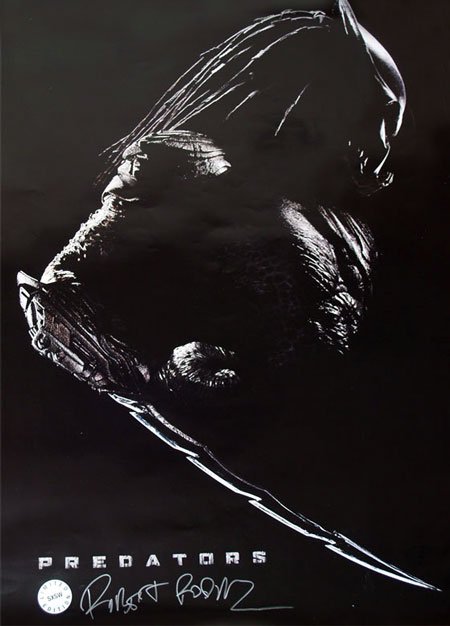 PREDATORS is an entertaining and well-made popcorn flick certain to make fans of the original movie happy, but it has very strong foul language and violence. Adrian Brody plays Royce, a soldier turned mercenary, who leads a group of even rougher characters from Earth transported to another planet. They soon discover that aliens, who have equipment to make themselves invisible, are hunting them down one by one, for sport. When the surviving group members realize that the aliens also hunt down their own kind, they see the chance for a possible alliance.

Faster paced than the original movie with Arnold Schwarzenegger, PREDATORS maintains the character drama that makes this more than your run-of-the-mill alien monster, CGI fest. Hardened commando-turned-mercenary, Royce, realizes how little of his own humanity remains. The woman in the group reacquaints Royce with his own humanity and the value of self-sacrifice. Consequently, the staunch survivalist not only survives, but seems to recover part of his soul. Thus, good wins out over evil, even if the movie sets things up for another sequel. There is very strong violence and excessive foul language, however, so extreme caution is advised.

(BB, C, LLL, VVV, S, N, DD, M) Strong moral worldview with light redemptive content where, fighting for survival against evil aliens hunting weaker beings, the hero regains his own humanity and realizes the value of self-sacrifice; 51 obscenities and six profanities; very strong violence with blood (including lots of green alien blood) such as alien rips spine out of human victim, people dying, much shooting, some explosions, fighting; a couple crude sexual references by one bad character; upper male nudity; no alcohol; no depicted smoking or drugs but man makes a reference to using cocaine; and, lying.

PREDATORS is an entertaining and well-made popcorn flick certain to make fans of the original movie happy. It has very strong foul language and violence, however, so extreme caution is warranted.

Before the first credit even hits the screen, Adrian Brody (ROYCE) is literally falling from the sky! The audience doesn’t know what’s happening, but holds its breath. This is going to be a wild ride. The usual panic ensues over a failing parachute. Seconds before crashing to the ground, it opens, and he’s on the floor of a jungle. Quickly aware that he is not alone, a brief turf war ensues until our hero is able to calm and wrangle an eclectic group of strangers into a team. The small band begins to explore their surroundings while comparing notes. No one remembers how they got here. One was dead asleep at home and woke up falling from the sky! What is going on? Coming upon a few trigger-happy others, they are quickly disarmed and conscripted into the travelling band.

Intended as the “true” successor to the original PREDATOR movie (ala Arnold Schwarzenegger), the band of misfit thugs explores their surroundings as the audience watches an intriguing character study unfold.

After ensuing chases by unidentified creatures (recalling “Rodents of Unusual Size” from THE PRINCESS BRIDE), everyone’s true colors begin to shine. The self-appointed leader, Royce, shows himself a rugged survivalist at all costs by using the team as bait to lure out their captors, identifying them and their location. Realizing Royce has been using them, near mutiny ensues among the group, but this quickly dissipates when their common enemy attacks. A chase ensues, leading them for the first time out of the jungle, where the first glimpse of the sky reveals they are on another planet altogether. As if hand picked or “chosen” on Earth and sucked into this other world via worm-hole or some such phenomenon, getting “home” has just become a very distant second to just surviving in a hunter’s game where they have become the hunted.

One by one, scene by scene, the team is picked off. Incorporating some old school hunting strategies, they do the best they can, but they are just no match for the cloaked aliens who are bigger, stronger and more technologically advanced. As the hunt progresses, Royce is forced to fight all the more to survive at all costs.

Enter Noland, a recluse eking out a solitary survival in an abandoned space ship played by Laurence Fishburne. Noland offers hope to the already dwindled team. He educates them on the hierarchy within the Predators themselves in which smaller weaker Predators are subject to and often used in this sick game preserve to the entertainment of the stronger. The discovery of a crucified Predator raises the possibility that “the enemy of my enemy is my friend.” This becomes their last best hope, a hope that yields promise, yet in the end seems hopeless.

(SPOILER ALERT) After a couple dozen twists and turns, Royce and Isabelle witness a new batch of pawns falling from the sky, and so the game continues along with a dim but flickering hope of finding a way “home.”

Faster paced than the original 1987 movie with Arnold Schwarzenegger, PREDATORS maintains the character drama that makes this more than your run-of-the-mill alien monster, CGI fest. It’s an alien planet very similar to Earth. Aliens even have a human scale, which stresses the story’s overall question, What does it mean to be human? Royce, the hardened commando-turned-mercenary, realizes how little of his own humanity remains. With equal skill and marksmanship, Isabelle, reacquaints him with his own humanity and the value of self-sacrifice. Consequently, the staunch survivalist not only survives but seems to recover part of his soul.

Primarily a science fiction thriller, this story contains a morality tale, demonstrating the self-destruction of characters who lack character. Good wins over evil, even if the movie does anticipate a sequel to the sequel. There is very strong violence and excessive foul language, however, so extreme caution is advised.