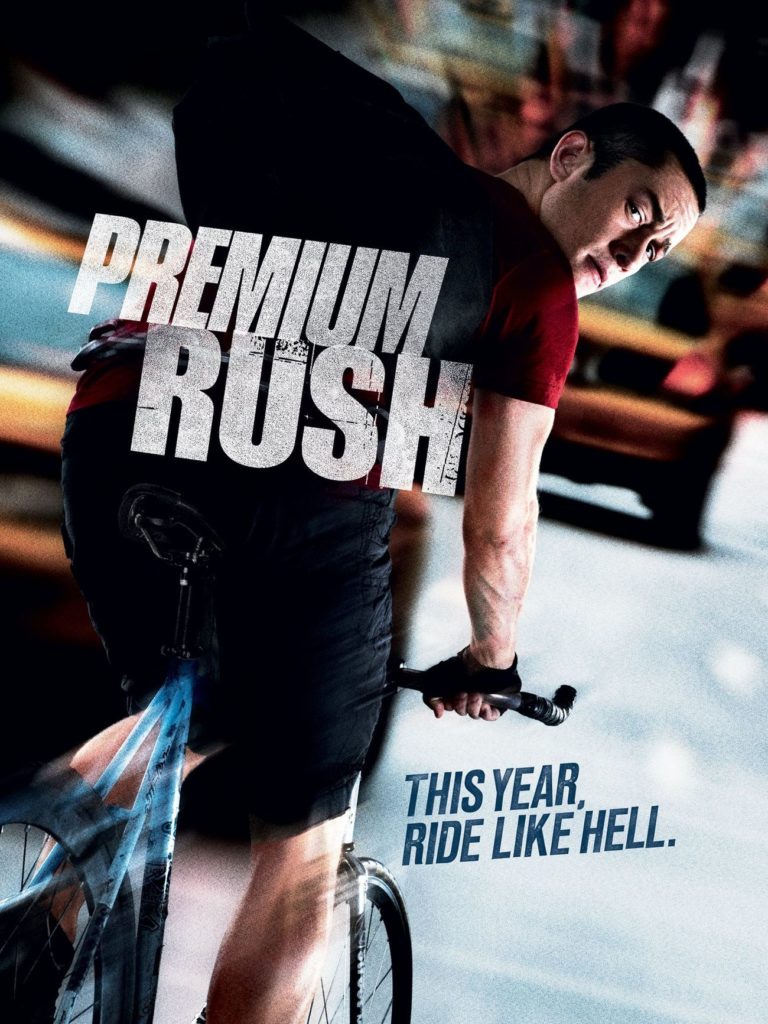 PREMIUM RUSH is a fast-paced popcorn movie about a bike messenger in New York City given an almost impossible package to deliver. The messenger finds out that a corrupt cop is after the package to pay off a large gambling debt to a local Chinese mob. While trying to escape the dirty cop, he gets in trouble with a bicycle cop. Then, he learns that the Chinese woman hiring him to deliver the package needs it delivered in order to get her baby and mother out of China. The woman had run afoul of the Communist Party running the government when she criticized its brutal Tibetan policies.

PREMIUM RUSH is a lightweight but exciting chase movie. Joseph Gordon-Levitt does a good job in his role as the bike messenger. The movie’s story could be better constructed, however. Also, the movie’s moral, anti-communist elements are mixed with some immoral behavior and overt references to Taoism and Buddhism. Finally, there are too many obscenities and profanities. So, extreme caution is warranted for PREMIUM RUSH.

(PaPa, FRFR, BB, ACAC, LL, VV, S, A, DD, MM) Strong mixed pagan worldview with some solid references to Taoism and Buddhism, but also some strong moral elements with a strong Anti-Communist, anti-totalitarian spin attacking the evils of China’s neo-fascist regime led by Communist Party officials; 80 obscenities (including 3 “f” words) and 22 profanities, plus the middle finger is given multiple times; strong action violence includes bike crashes that include injuries and some blood, people get run over by cars, a man gets shot in the back of his head, and almost constant chasing with some fantasy violence such as bike rider imagines getting run over by a delivery truck if he takes a certain route; no sex scenes but some light sexual dialogue and passionate kissing; no nudity but female bike messengers where some revealing formfitting outfits; a man drinks a beer; drugs are briefly mentioned; and, strong miscellaneous immorality such as bike messengers often disregard the law by damaging cars on the road purposefully, main character steals a police officer’s bike to deliver a package, law enforcement is looked on poorly even though they’re just doing their job, and main characters lie with no consequences.

PREMIUM RUSH is a fast-paced popcorn movie about a bike messenger in New York City given an almost impossible package to deliver. PREMIUM RUSH is entertaining, with some moral elements and an anti-totalitarian, anti-communist subplot, but has too many obscenities and profanities.

The movie stars Joseph Gordon-Levitt as Wilee, who loves being a bike messenger in New York City. Giving up being a lawyer, Wilee constantly rides with no breaks and excessive speed. Knowing Wilee’s the fastest of the bike messengers, Nima, who happens to be the Chinese roommate of Wilee’s girlfriend, hires him to make a delivery.

Once Wilee picks up the package, though, a cop named Bobby tries to stop him and steal the package. Instantly realizing this guy is not a good guy, Wilee races away from him and the chase begins.

Stopping at the police station to report Bobby, Wilee overhears that Bobby is actually a policeman himself, but clearly corrupt. The backstory is Bobby has a gambling addiction and needs desperately to pay back a Chinese gang. The gang told Bobby that if he picks up the package from Nima, he will get out of the debt he owes.

Not knowing any of this, Wilee moves forward to help Nima get the package to its destination. However, Nima has a very precious commodity in this delivery that adds even more excitement. It also gives the movie some moral elements.

Racing through all of Manhattan, Wilee gets stopped by an NYPD biking cop. At the same time, Wilee has been fighting with his girlfriend Vanessa, who’s being pursued by Manny, another messenger. Manny really has an interest in Vanessa and somehow gets Nima’s package. He challenges Wilee to a race in order to give Wilee back the package. The clock is ticking, and the package must be delivered. Will Wilee be able to deliver the package while fighting off the corrupt policeman, the bicycle cop, and Manny?

PREMIUM RUSH is a lightweight but exciting chase movie. Joseph Gordon-Levitt does a good job in his role as the bike messenger. The movie’s story could be better constructed, however. It isn’t fully compelling emotionally or intellectually, partly because the protagonist isn’t completely a good guy. There are some strong moral elements, especially in the second half. The protagonist does finally put himself in danger by helping someone in need. Included in those elements is a major Anti-Communist subplot involving the current neo-fascist Chinese government led by Communist Party despots. Extreme caution is advised for the movie’s negative elements, especially the excessive foul language and some positive overt references to Taoism and Buddhism.