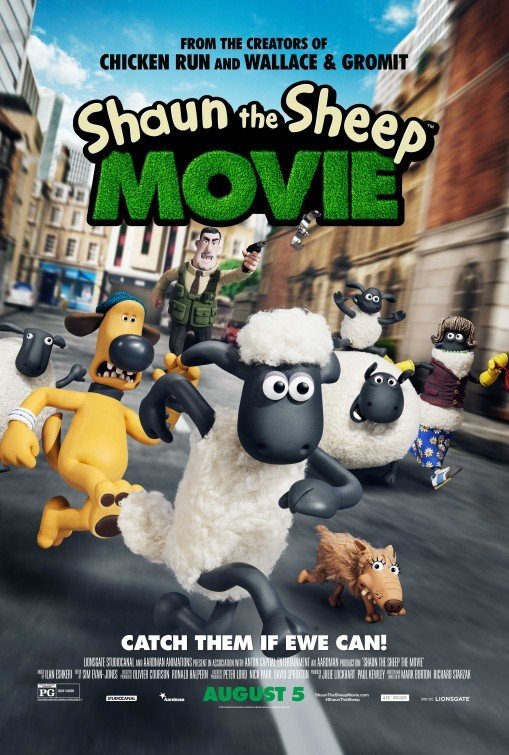 SHAUN THE SHEEP MOVIE is an adorable, entertaining animated comedy. Shaun the sheep wants to have the day off from farm work. When he conspires with the other sheep, they lose their shepherd, the owner of their farm. Shaun and the other sheep help their master fall asleep and put him in a RV trailer to get the day off. When the trailer rolls away, it rolls all the way to the city. They must go to the big city, but avoid being captured by animal control.

The humor in SHAUN THE SHEEP MOVIE is so witty and clever that parents and adults will like the movie along with children. The pacing is a slower, British style, but not boring. The clay animation is great and adds a level of cuteness. The movie has a strong Christian, moral worldview. The sheep do everything to get their shepherd back, even putting themselves in harm’s way. They learn that, even though they want to do their own thing, their master’s will is better for them. SHAUN THE SHEEP MOVIE is an adorable family movie.

(CCC, BB, FR, V, N) Very strong allegorical Christian, moral worldview about a group of sheep and their leader trying to find and find their shepherd, images of churches with crosses on them, and characters go out of their way to help another, but some characters have headscarves and a turban in the city set the European city; no foul language, but some passing gas jokes, burping and man is on the toilet; light violence with characters falling and being pushed but it’s very light; no sex but one light kiss; partial rear nudity character’s pants are too low; sheep characters make cocktail looking drink, but there’s no alcohol in it; no smoking or drugs; and, nothing else objectionable.

Shaun is a small, cute sheep, who feels every day is the same. When he was just a baby sheep, there was a little more fun happening, and he was closer with his master. Shaun decides to take matters into his own hooves and works with the other sheep to help his master sleep the entire day. When they put him in the RV trailer to sleep, the trailer rolls down the street all the way to the big city.

Being the leader, Shaun must figure out how to find his shepherd. He decides to get on the bus that goes to the big city. Little does he know, however, that all the other sheep on the farm get on the next bus.

When Shaun gets out of the bus, he sees an animal control worker and watches as the animal control worker catches a stray dog. Immediately, he fears that he too will be taken away. So, when he sees the entire flock get off the next bus, he knows keeping everyone safe will be a great challenge.

SHAUN THE SHEEP MOVIE is an adorable animated movie. Though it has no words, because sheep can’t talk, it still gets the message across very clearly. The humor is so witty and clever that parents and other adults will like the movie along with children. The pacing is a slower, British style, but viewers don’t get bored. The clay animation is very well done and adds a level of cuteness.

SHAUN THE SHEEP has a strong Christian, moral worldview. The characters see the value in having a shepherd and doing hard work. The sheep do everything they can to get back their shepherd, even putting themselves in harm’s way. They learn that, even though they want to do their own thing, their master’s will is better for them. There are also churches with crosses in the background of many scenes. Of course, audience members who know the real life Shepherd Jesus Christ, understand that their Master’s will is better for them.