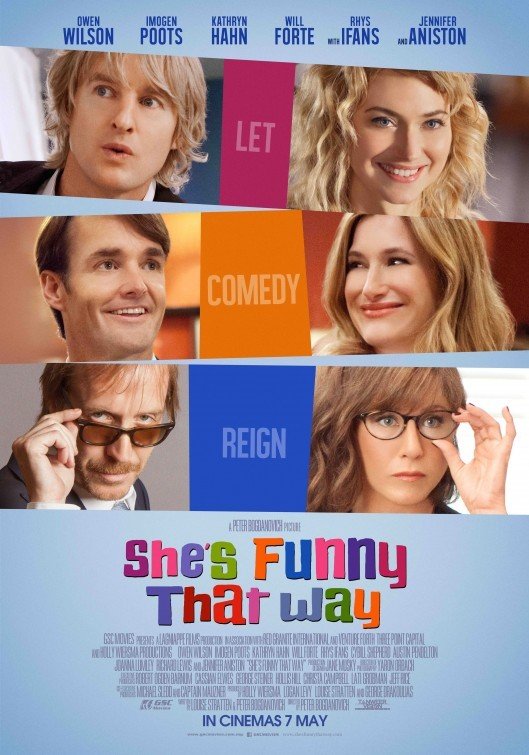 SHE’S FUNNY THAT WAY stars Owen Wilson as Arnold Albertson, a top Broadway director who offers $30,000 to Isabella, a female “escort,” to stop being a call girl and follow her dream. Isabella takes the $30,000 and dives into her acting career, only to find that her first audition after quitting life as a prostitute is to play a prostitute in a new play directed by Albert. She’s so perfect for the role that Albert’s producing team, which includes his wife, insists she be hired over his objections. Thus, begins an incredible series of comical mishaps and misunderstandings involving Arnold, Arnold’s wife, Isabella, Isabella’s co-star, and other people.

SHE’S FUNNY THAT WAY is funny, fast-paced and inventive. The performances are terrific across the board, especially Owen Wilson as the male lead and Jennifer Aniston as a psychiatrist increasingly disgusted by the actions of her clients. While the story involves illicit affairs, nothing explicit is depicted. Also, the cheating is exposed and confronted, forgiveness offered and marriages re-affirmed. That said, the gratuitous foul language and innuendo in SHE’S FUNNY THAT WAY warrant extreme caution.

(RoRo, B, C, LL, SS, N, A, MM) Strong Romantic worldview, with a light moral, redemptive ending with cheaters confronted, marriages re-affirmed and some forgiveness; about 11 obscenities (including five “f” words) and five light profanities; light violence includes a few comically presented light punches that knock people over but cause no real harm; references to prostitution and implied fornication and adultery but the comical plot focuses on this illicit activity, though it’s not explicitly shown; brief upper male nudity; alcohol use; no smoking or drugs; and, frequent lying and deception played in an absurd, comical tone where it’s generally exposed and confronted.

SHE’S FUNNY THAT WAY is a fast-paced, highly inventive screwball comedy farce about a Broadway director who gives $30,000 to a female escort to reform her life, only to have her turn his life upside down when she winds up winning the lead role in his new play over his objections. SHE’S FUNNY THAT WAY is very funny and clever, but there is some foul language and the plot involves people cheating on one another, but the cheating is exposed and resolved positively.

The movie stars Owen Wilson as Arnold Albertson, a top Broadway director. Arnold has an odd habit of hiring female “escorts” and taking them out to nice dinners before going to bed with them and then giving them $30,000 to follow their real dreams and stop being call girls. The story is told through the point of view of one such woman, Isabella Patterson (Imogen Poots), as she explains her rise to fame as an actress to a skeptical reporter in an interview.

Isabella took the $30,000 that Arnold gave her and dove into her acting career, only to find that her first big audition after quitting life as a prostitute was to play a prostitute in a new play directed by Albert. She’s so perfect for the role that Albert’s producing team, which includes his wife (played by Kathryn Hahn), insists she be hired over his objections.

Thus, begins an incredible series of mishaps and misunderstandings where everyone involved is revealed to have a secret second life, or secret lover, or both. To give away more would be a crime to potential viewers, as constant surprise is just one of the movie’s many delights.

Peter Bogdanovich, who reinvigorated the screwball comedy genre with his 1972 movie WHAT’S UP, DOC?, directs and co-writes again here. While the story involves a lot of illicit love affairs, nothing explicit is depicted. The story is too fast-paced to linger on any particular liaison. Eventually, everyone is caught lying or cheating and gets confronted about it. Faced with the loss of their main relationships, they all stop, forgive each other and move on with their lives. Thus, all the goofiness resolves itself nicely, with marriages being re-affirmed. Ultimately, though he doesn’t always succeed, Bogdanovich isn’t trying to offend anyone, but more to elicit a lot of laughs about the foibles of today’s selfish, flawed human beings. It also helps that the movie doesn’t seem to take itself too seriously. As such, the movie is more like the classic Hollywood comedies that were designed for more mature viewers than the usual R-rated comedy.

The performances in SHE’S FUNNY THAT WAY are terrific across the board, with Wilson doing a superb job at the center of the insanity in one of his best performances. Jennifer Aniston must be singled out from the rest of the deep cast for her hilarious turn as an embittered psychologist whose conflicting clients serve to disgust her more and more with each misstep they make.