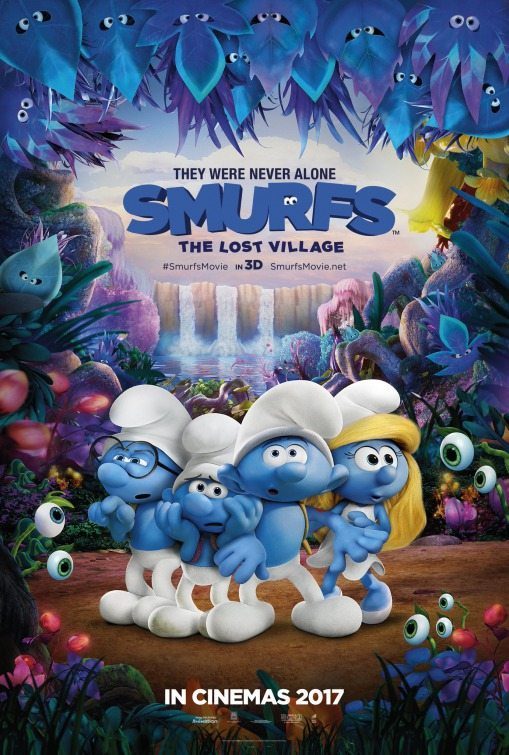 In SMURFS: THE LOST VILLAGE, Smurfette wants to understand her true purpose. While playing with Clumsy, Hefty and Brainy in the forest, she accidently gets too close to the forbidden forest. In the bushes, Smurfette sees two eyes looking back at her and finds a Smurf-like hat. The evil Gargamel sees Smurfette through his binoculars, captures her and tries to find out where the hat originates. He thinks the hat comes from another Smurf village. Smurfette escapes, but feels it’s her duty to warn the lost village about Gargamel. Eventually, she finds her purpose by trying to help the lost village.

SMURFS: THE LOST VILLAGE is a very fun animated movie for all ages. The movie has very little scary elements or reason for caution. The evil Gargamel does some magic, but overall, the movie has a strong Christian, moral worldview. It’s revealed that the evil Gargamel created Smurfette to do evil, but her heart has been transformed. She finds her purpose in helping others live, no matter the sacrifice. There’s also a scene in SMURFS: THE LOST VILLAGE, where the Smurfs pray.

(CCC, BBB, O, Pa, V, M) Very strong Christian, moral worldview where one scene makes Smurfs look like they’re praying, one Smurf lays down his life for other Smurfs in an act of sacrifice and love, talk about finding one’s purpose, and characters save villain because they always “do the right thing,” but the main villain does do magic and it’s implied Papa Smurf does magic too; no obscenities nor profanities; light violence with some hitting and characters falling from great heights, but nothing drastic; no sexual content; no nudity; no alcohol use; no smoking or drugs; and, characters lie at one point.

In SMURFS: THE LOST VILLAGE, Smurfette wants to understand her purpose. All the other Smurfs have a name that characterizes what they can do, like Clumsy, Brainy, Hefty, Baker, Jokey, and so on, but Smurfette doesn’t. Hefty likes Smurfette a lot, so they go surfing through the forest with Clumsy and Brainy. While surfing, Smurfette picks up too much traction and goes much further then she’s allowed. She is right by the wall to the forbidden forest, and when she lands she sees two eyes coming out of a leaf mask, and the two stare at each other.

Smurfette finds a hat that’s a different color then the Smurf hat, but otherwise is the same. Smurfette is very curious who this could be and where they live. Immediately, the evil Gargamel’s bird, Baglooboo, swoops down and picks up Smurfette, and takes her back to Gargamel’s place.

Clumsy, Brainy and Hefty see Smurfette being taken away, and they quickly race after her. When they arrive, they see Gargamel with the hat, saying that Smurfette must lead him to this unknown Smurf village. The three other Smurfs save Smurfette from Gargamel, and they all race back home.

When they make it back home, Papa Smurf gets angry at them for wandering off to such unsafe territory, so he grounds them. Smurfette, however, is swept up in her thoughts that there’s another village out there that may be like the Smurfs. She feels it’s her duty to warn the lost village that Gargamel is coming for them.

SMURFS: THE LOST VILLAGE is a family movie the entire family will enjoy. There’s very little questionable content in SMURFS: THE LOST VILLAGE, though there is some magic done by the villain. Also, there is some magic done by Papa Smurf. Otherwise, though, the movie is fun and well made. The look for the movie was intentionally more like the original Smurfs, rather than the other movies made. The movie has some fun creativity with the forbidden forest’s depiction, something which Smurf stories haven’t shown before.

SMURFS: THE LOST VILLAGE has a strong Christian, moral worldview with a great storyline about finding that one’s purpose is helping others. It’s revealed that Smurfette was created by the evil Gargamel to do evil, but her heart has been transformed. Also, sacrifice helps solve the movie’s plot problem. Despite the brief magic references, there’s a moment when the Smurfs all close their eyes, bow their heads, hold hands and Papa Smurf says what seems like a little prayer.