"It Might Make You Go Straight Outta the Movie Theater" 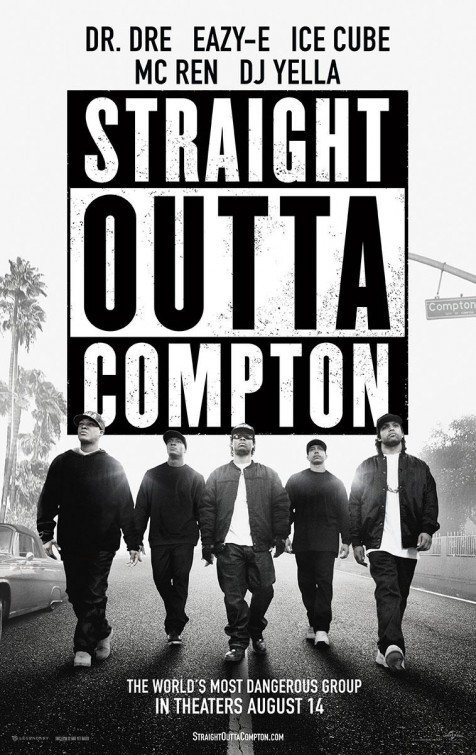 STRAIGHT OUTTA COMPTON follows the famous gangster rap group N.W.A. from life on the crime-ridden, poverty-stricken streets of Compton, California to national stardom. While the group consisted of five members, the movie focuses on three of them, including Eric Wright aka Eazy-E, Ice Cube and Dr. Dre. In 1986 Compton, 22-year-old Eazy-E is making dealing drugs on the street. Ice Cube, still in high-school, is writing rap lyrics and performing at small clubs hosted by Dr. Dre, who’s trying to get his career as a DJ started. The group creates a hit song and album, turning them into a controversial American sensation.

The acting, direction and cinematography of STRAIGHT OUTTA COMPTON are exceptional. The movie slides over complex issues, including alleged police abuse, free speech, gang violence, poverty, and the dangers of excessive wealth, but it fails to offer any solutions to anything. It reflects the vulgar messy life of some talented men, offering no light or redemption. Media-wise viewers will find the magnitude of foul language in STRAIGHT OUTTA COMPTON excessively vulgar. The movie also contains strong lewd content and substance abuse.

(PaPaPa, B, Cap, LLL, VV, SS, NN, AAA, DD, MMM) Very strong pagan worldview with immoral revelry shown in excess, lawlessness, disrespect to those in authority, and debauchery, brief reference of Ice Cube’s conversion to Islam, but some light moral aspects in the fact that some of this immorality results in natural consequences, and some pro-capitalist content where one character gives a lecture on work and responsibility and ultimately becomes one of the most powerful and influential entrepreneurs; at least 285 “f” words, 220 other obscenities, 18 profanities (mostly GD’s and JC’s), many uses of the “n” word, sexual references to male and female genitalia; strong violence includes the police raid a criminal’s house with a battering ram that hits a person, multiple fist fights and brawls, multiple beatings (including by police officers), riots with vandalism, cars and buildings set on fire and stores looted, and man takes a baseball bat to a music executive’s office; one brief party scene with two depicted sexual situations, one of intercourse and one shot of oral sex, and many references and discussion of sex, including in rap songs; multiple parties with upper and rear female nudity, women in bathing suits, provocative dresses and outfits, and upper male nudity; heavy drinking and drunkenness throughout the movie; implied drug use, cocaine lines and piles of marijuana shown, couple smokes a marijuana cigarette; and, greed, blackmail, disrespect, revelry, and gambling.

STRAIGHT OUTTA COMPTON follows the famous gangster rap group N.W.A. from life on the streets of Compton, California to national stardom. While the group consisted of five members, the movie primarily focuses on three of those members; Eric Wright aka Eazy-E, Ice Cube and Dr. Dre.

In 1986 Compton, a crime-ridden and poverty-stricken city near Los Angeles, 22-year-old Eazy-E is making money dealing drugs on the street. Ice Cube, still in high school, is writing rap lyrics and performing at small clubs hosted by Dre, who’s trying to get his career as a DJ started. Dre believes the hip-hop scene is ready for something new. He convinces Eazy-E to put up the money to record a song with a New York based rap trio, but when the trio falls through, Dre and Ice Cube convince Eazy-E to record the song with him rapping. Eric reluctantly agrees and the hit song “Boyz-n-the-Hood” becomes a hit on the street. With the addition of MC Ren and DJ Yella, N.W.A. (N****** With Attitude) is born.

Music manager Jerry Heller (Paul Giamatti) sees something special in the group, so he forms a working relationship with Eric and takes him on as a client. Eric forms a label called Ruthless. Under Jerry’s help, N.W.A. releases their landmark album Straight Outta Compton with a bigger label, Priority Records. While recording the album, the group has a run-in with the police and are harassed outside the recording studio for looking like gangsters. This incident inspires Ice Cube to write the song “F*** tha Police.”

Straight Outta Compton becomes the talk of America as N.W.A. goes on tour performing in large auditoriums across America. Because their song “F*** tha Police” is deemed anti-law enforcement, they are ordered not to perform it and even threatened by the FBI. The group uses these threats and turns it into free publicity claiming infringement on first amendment rights, resulting in their arrest at one point for singing the song in Detroit.

However, Ice Cube still waits on a contract from Jerry and grows tired of not being paid, even though he writes a large portion of the lyrics. Not trusting Jerry, Cube decides to leave N.W.A. after they finish their first tour. Choosing to go the solo route, Ice Cube becomes a successful rival for N.W.A. and even enters the Hollywood scene by starring in BOYZ IN THE HOOD. Meanwhile, things for N.W.A. begin to change as Dre also finds out that Jerry is taking advantage of them, so Dre leaves and starts Death Row Records with Suge Knight.

When events surrounding Rodney King and the Los Angeles riots occur, the relevance of the music N.W.A. started and the effects of their lyrics have on the youth is seen in full effect.

STRAIGHT OUTTA COMPTON covers a short amount of time, relatively speaking, compared to many other biographical movies. The rise and fall of N.W.A. was fast, but the effects of their legacy persist today (both good and bad, depending on who you look at). The music struck a chord with African American youths, especially in impoverished neighborhoods where crime was more rampant. When asked in a press conference if their music promoted violence against law enforcement and criminal behavior, Ice Cube responds, “Our art is a reflection of our reality.” Although his statement is evasive, it’s supported by many stories of young black men losing family members and friends to fights and gang brutality, not to mention frequent harassment from police officers. The young men earn empathy from viewers as some of them truly want out of the reality they rap about. One scene stands out, where a now successful solo artist, Dr. Dre, lectures an entourage of lazy punks enjoying the fruits of his hard work but bringing their former Compton lifestyle with them.

STRAIGHT OUTTA COMPTON sails through many complex issues, including alleged police abuse, free speech, gang violence, poverty, and the dangers of an excess of wealth. The movie refuses to focus too long on one thing, reverting to a bird’s eye view of the events that occurred. The more concerning aspects of N.W.A.’s music is the group’s attitudes toward police men and women serving communities. However, this discussion can’t take place without acknowledging the growing vitriol towards law enforcement due to recent controversial events and tragedies and injustices. A biblical response to this cultural divide eating away at society doesn’t rely on one person or community, it’s on every human. Whether you’re a rapper, a police officer or a mother in the Midwest, our actions and life choices aren’t pre-determined by our environment. We’re called to live above our circumstances, to make moral choices regardless of what’s around us. This is a higher calling and it starts with self-government. Sadly, this idea of self-government and individual moral responsibility isn’t represented in any character in STRAIGHT OUTTAS COMPTON, providing no real solution for angry young men and women looking for answers.

Even when certain men, like Eazy-E, left their more impoverished lives behind, their new life didn’t suddenly make them upstanding citizens. Eric sadly continued in his revelry and immorality, dying in 1995 at the age of 31 due to contracting AIDS. STRAIGHT OUTTA COMPTON doesn’t try to offer a profound answer to life’s big questions, but it doesn’t hide from the fact that fame is fleeting and life is short. In many ways, the movie is similar to N.W.A.’s music in that it merely reflects the messiness of the culture and lifestyle the founders of the group lived. For few, it may be attractive and alluring, but most will see the lifestyle has laughably ridiculous.

The acting, direction and cinematography of STRAIGHT OUTTA COMPTON are exceptional. Never a dull moment, the movie stays compelling despite its long running time.

In conclusion, STRAIGHT OUTTA COMPTON will spur both irrational anger and intelligent conversation from viewers, but the filmmakers show no desire in offering any positive, redemptive solutions. Many critics will posit this movie as being artistic and unbiased, but Movieguide® believes it’s ultimately irresponsible. The problems the movie presents are real, but “F” tha Police” is no solution, and Movieguide® believes its time that these artists start encouraging, through their art and their actions, the positive change they want to see.