"The Title Says It All" 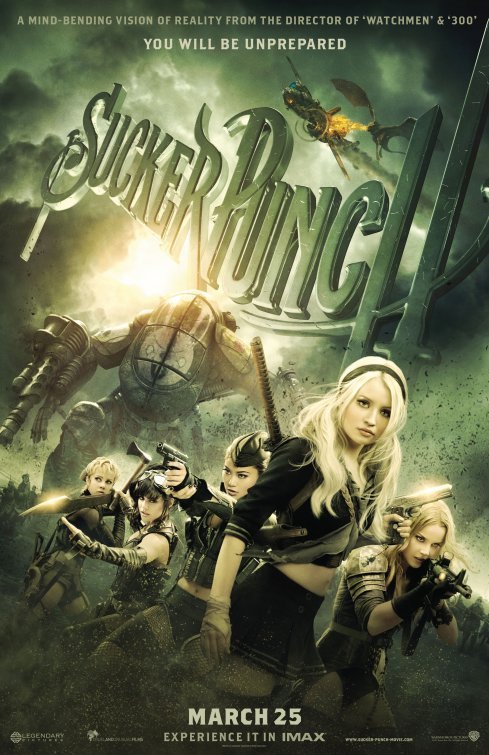 SUCKER PUNCH is a bizarre action fantasy about a 20-year-old woman placed in a mental institution for females by her fat evil stepfather. The stepfather is paying the lead male attendant under the table to make sure his stepdaughter gets lobotomized. Nicknamed Baby Doll because of her girlish looks, the woman resorts to fantasy. She imagines herself and the other women being held prisoner in a nightclub that’s also a bordello for rich, but greasy, “clients.” In this fantasy world, she also imagines herself battling giant samurai soldiers, German clockwork zombies in World War I, a dragon, and a ticking timebomb. A mysterious man gives cryptic clues for escaping the asylum and the nonexistent bordello.

SUCKER PUNCH devolves right away into a nearly relentless mess of over-the-top fantasy violence, incessant leering at the girls’ skimpy attire and bombastic music. Although the heroine and the other women are trying to free themselves from violent tyranny, their characters are such ciphers that it’s impossible to care much for any of them. Even an uplifting but cryptic ending cannot save this movie. SUCKER PUNCH will make most moviegoers feel like they’ve been sucker-punched in their wallets.

(PaPa, Ro, C, H, B, Ab, P, LL, VVV, S, A, DD, MM) Strong mixed pagan worldview with Romantic, Christian, humanist, moral, and Anti-Christian elements, plus some fighting against tyranny for liberty/freedom and voiceover says we all have guardian angels that don’t do our fighting for us but are voices that tell us we can fight through anything, but only one young woman escapes a mental asylum run by an evil male attendant; 11 obscenities, three strong profanities, two light profanities; sometimes very strong disturbing violence includes evil pimp shoots two young women in head, implied attempted molestation interrupted, implied stabbing death, woman stabs villain in neck, arson to escape imprisonment, women fight monsters (including giant samurai soldiers, mechanized German zombies in WW I, and dragon), war scenes, explosions, large terrorist bomb explodes in fantasy city, airplane battles, zeppelin explodes and crashes, baby dragon’s neck sliced open, intense fighting, woman leaps over weapons during fantasy fighting, woman batted across large room and into floors which tear up as she slides, demonic samurai decapitated with no blood, women viciously threatened, implied lobotomy; no depicted sex scenes but implied attempted molestations interrupted twice and references to prostitution in bordello where several young women are imprisoned and threatened; no nudity, but short skirts and female cleavage and midriffs; alcohol use; smoking and woman drugged; and, false imprisonment, bribery, greed, stepfather cheats stepdaughters out of their inheritance and isn’t brought to justice, arson, woman imagines a priest has delivered her as abn orphan to work in a nightclub that’s also a bordello with young adult prostitutes, and some implication that people can mold reality.

SUCKER PUNCH is oddly befitting its title as a surprise-stinkbomb of a movie from director Zach Snyder, who’s generally drawn raves from other critics for his unique visual style in films like 300, WATCHMEN and THE OWLS OF GA’HOOLE, the only really great movie in the bunch. Here, he offers up an unpleasant and incomprehensible mess of a movie where even the protagonist – a 20-year-old girl nicknamed Baby Doll – seems to have no personality or purpose beyond violent fighting and pouting while wearing clothes more befitting a child.

The movie opens with Baby Doll being brought to a mental institution by her evil stepfather after Baby Doll accidentally shooting her younger sister while trying to stop the stepfather from attacking and molesting the sister. The stepfather is paying the asylum’s lead male attendant under the table to schedule Baby Doll for a lobotomy when the doctor doing that procedure visits a few days hence.

To escape her dire circumstances, Baby Doll resorts to fantasy. She imagines that she’s being imprisoned in a nightclub and bordello to dance and perform for the club’s rich but greasy looking “clients.” Forced to show her sexy dancing abilities, Baby Doll imagines herself in another fantasy where she battles giant samurai soldiers with demon-red eyes, Worlds War I zombies and a dragon. A mysterious man tells her that, to find freedom, Baby Doll must find a map, something to create fire, a knife, a key, and one another thing. While she searches for these things in the fantasy world, Baby Doll teams up with the other prostitutes in the non-existent bordello to find the same items. [Spoiler Alerts] Eventually, what happens in the reality of the mental hospital is that Baby Doll uses the knife to incapacitate the male attendant so she and another girl can set a fire as a diversion and escape the hospital using the key and the map.

After a slow start, SUCKER PUNCH devolves right away into a nearly relentless mess of over-the-top fantasy violence, incessant leering at the teenage girls’ skimpy attire and bombastic music that may make viewers wish they were deaf. The characters and dialogue are often ludicrous. Although the heroine and the other women in the story are trying to free themselves from the tyranny in the mental institution and the non-existent bordello, their characters are such utter ciphers that it’s impossible to care much for any of them. Even an uplifting but cryptic ending cannot save this movie. SUCKER PUNCH will make most moviegoers feel like they’ve been sucker-punched in their wallets.