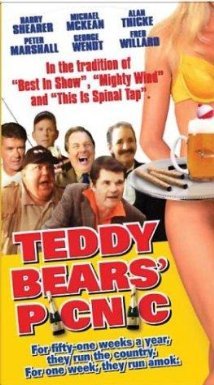 TEDDY BEARS’ PICNIC focuses on a fictional Zambesi Glen, an exclusive retreat for the rich and powerful, reminiscent of the real Russian River, CFR gathering hole. A powerful lawyer, an Air Force general, a business tycoon, an important senator, and the Glen’s maitre d’ Joey Lavin are some of the characters that gather for the official opening week. An oath of secrecy is taken and the frolic begins with robes, drumbeats, chanting, and the “killing of time” as the “priest of rest” is summoned to “ease the burden of privilege.” Sophomoric revelry abounds, but the secrecy they prize is threatened as information about the happenings leaks outside of the secure confines of the Glen.

TEDDY BEARS’ characters are introduced rapid-fire, leaving little time to grasp each one before the next one leaps onto the scene. The plot becomes confusing and complicated, making it frustrating to follow. This could be forgiven if TEDDY BEARS’ PICNIC was funny, but the comedy here misses the mark and is laced with offensive language and illicit behavior. TEDDY BEARS’ PICNIC does have some genuinely funny moments, but not enough to balance its fragmented story and vulgar content.

“Have no care, ye who enter here” is the motto of Zambesi Glen, the exclusive retreat for the rich and powerful in Harry Shearer’s TEDDY BEARS’ PICNIC. The movie begins as the Glen prepares for its summer season, which kicks off with an open house for the wives and female loved ones of its members. Attorney Whit Summers (John Michael Higgins), business giant Clifford Sloane (Henry Gibson), banker Stanton Bandermint (Robert Mandan), university chancellor Porty Pendleton (Michael McKean), Air Force General Edison Gerberding (George Wendt), Senator Roger Dickey (Fred Willard), and the Glen’s maitre d’ Joey Lavin (Harry Shearer) are just some of the characters that gather six days later for the official opening week. An oath of secrecy is taken and the frolic begins with robes, drumbeats, chanting, and the “killing of time” as the “priest of rest” is summoned to “ease the burden of privilege.” Sophomoric revelry abounds, but the secrecy they prize so highly is threatened when information about the goings on begins to leak outside of the secure confines of the Glen.

Harry Shearer’s spoof of the famous real-life Russian River private retreat for Council for Foreign Relations big wigs, corporate executives, government officials, and other powerful folk has a promising and talented cast and a subject rich with potential, but fails to deliver the laughs and to accurately satirize the real life machinations of the rich and famous. Instead, it becomes bogged down in characters and humor that fall strangely flat. The pace is fast, as characters are introduced rapid-fire, leaving little time to grasp each character before the next one leaps onto the scene. The plot becomes confusing and complicated with each additional character, making it frustrating to follow and difficult to be drawn into the story.

All this could be forgiven if TEDDY BEARS’ PICNIC offered the kind of humor Shearer and the other actors have provided in other successful comedy efforts, but the comedy here misses the mark and is laced with such offensive language and illicit behavior that there is little to like about any of the members and even less to find humorous. Except for a spunky female news reporter, women in the movie are referred to only in a sexual way, and often in a demeaning fashion.

TEDDY BEARS’ PICNIC does have a few successful comic moments. There is a genuinely funny (sadly so) spoof on the sensational and personality-driven aspect of television news. The casting of some of the Zambesians is delightful – George Wendt as a blustery but frustrated general who tries to manipulate the military to help him out of a tight spot, but can’t do so effectively because he is head of procurement, not operations. Alan Thicke (who plays himself) adds some non-offensive humor to the ensemble as he hobnobs with the powerful guests. Fred Willard has a truly funny (and cynical) speech to the group about deregulation, though some may take offense at the veiled partisan slams. Finally, Harry Shearer sometimes is amusing as a bossy maitre d’ trying to control an out of control staff.

In the end, however, the movie suffers from its fragmentation and is padded with coarse, vulgar language instead of the truly funny comic bits we’ve seen from Shearer before in THIS IS SPINAL TAP and other projects.

TEDDY BEARS’ PICNIC offers no real insights on the rich and powerful. The movie careens along toward a climactic moment it never seems to reach, perhaps a result of hasty editing and an unusual production schedule (the movie was shot in under 20 days). Although the movie is a comedy, it does send a strong message that hedonism is an acceptable and universal escape from responsibility, a real corruption of the true intent of rest.