THE GIRL WHO PLAYED WITH FIRE 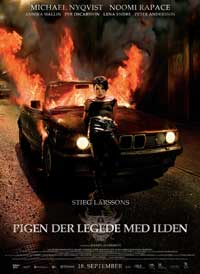 THE GIRL WHO PLAYED WITH FIRE is the second part of a lurid but popular trilogy of Swedish movies about a young bi-sexual woman who solves violent crimes against women. Based on a series of popular books, the movie opens with Lisbeth Salander returning to Sweden after a year’s absence. Her fingerprints are found on the murder weapon of the evil probation officer who raped her in the first movie and two young reporters investigating a sex trafficking operation. Mikael, the journalist who befriended Lisbeth in the previous movie, believes she is innocent. Acting separately, Mikael and Lisbeth try to clear her name. Their investigation leads to some uncomfortable details about Lisbeth’s tortured youth.

As a suspense thriller, THE GIRL WHO PLAYED WITH FIRE is very riveting until the final climax, which is somewhat anticlimactic. Sadly, the heroine renews a torrid homosexual affair with her female lover in one scene. The movie also includes a couple other lurid sex scenes, very strong violence, nudity, and plenty of strong foul language. Thus, although the villains in the story deserve their punishment, the movie’s lurid content is much too excessive and unacceptable.

(HH, Fe, PC, HoHoHo, B, LLL, VVV, SSS, NNN, A, D, MM) Strong humanist, slightly feminist, politically correct worldview with explicit content, including a very strong lesbian sex scene, plus some moral elements of trying to stop an evil sex trafficker; 26 obscenities (including some “s” and “f” words), five strong profanities and one My God light profanity; very strong bloody but not gory violence includes two corpses with pools of blood under their head because they’ve been shot, man has hatchet in his knee, woman’s head is bloody from gunshot wound, woman shot three times but still alive, character buried alive but gets out, rough punching and kicking and boxing as woman and man try to fight large villain, arson, girl burns father who beat up her mother, man has burn scars over one side of face and walks with a cane, man tasered until he becomes unconscious, man tied up and threatened with hanging death unless he reveals information, taser has no effect on large villain who can’t feel pain, men shot and wounded; extreme scene of homosexual sex, depicted fornication with sex slaves in two scenes, scene of implied fornication of one couple; shots of upper female nudity, rear female nudity, shot of lower female nudity; alcohol use; smoking; and, tattoos, extortion and threats against a villain who then tries to retaliate, kidnapping, government protects bad guy possibly not knowing how bad he really is, and girl, in flashback, carries out revenge plot against father for hurting her mother.

THE GIRL WHO PLAYED WITH FIRE is the second part of a lurid trilogy of Swedish movies about a young bi-sexual woman who solves violent crimes against women. Thus, the content is very graphic and tinged with a politically correct worldview supporting open homosexuality, even though the despicable villains are eventually defeated and deserve what they get.

In this second movie, the title character, Lisbeth Salander, has left Sweden and her two lovers from the first movie, Mikael and Miriam, are worried because they have not heard from her for more than a year. Lisbeth has returned, however, because the probation officer who exploited her in the first movie is trying to remove the tattoo from his belly she carved identifying himself as a rapist. She threatens the guy with his own gun not to remove the tattoo and make sure he sends positive reports on her back to the authorities.

The man decides, however, to get help to stop Lisbeth from a mysterious sex trafficker. The sex trafficker’s business, however, is being investigated by Mikael’s magazine, which has hired the young reporter who has been gathering information on the powerful clients exploiting the female prostitutes.

When the probation officer, the young reporter and the reporter’s girlfriend (who has been interviewing the female victims of the sex trafficker) turn up shot by the officer’s gun, the police naturally turn their attention to Lisbeth.

Acting separately, Mikael and Lisbeth race to clear her name of the murders. Their investigation into the sex trafficker and his super-tough hit man leads to some awful secrets about Lisbeth’s past. Worse, the hit man hired by the sex trafficker is now hunting for Lisbeth to murder her too.

As a suspense thriller, THE GIRL WHO PLAYED WITH FIRE is very riveting until the final climax, which is somewhat anticlimactic. Like the first movie, the thriller aspects of THE GIRL WHO PLAYED WITH FIRE are well done, despite some storytelling confusions in the plot. Also like the first movie, however, the second one contains very strong sexual content and nudity, as well as plenty of strong foul language. The sex and nudity is extremely excessive. It also contains very strong homosexual elements in one very explicit scene. These elements reflect today’s Neo-Marxist politically correct worldview among most, if not all, liberals, leftists, moderates, and even many who (unconvincingly and incorrectly) call themselves Christian and/or conservative. The strong homosexual elements only occur in one scene, so the movie ends up just very excessive rather than completely abhorrent. Even so, the movie’s excessive content is unacceptable viewing for all audiences.