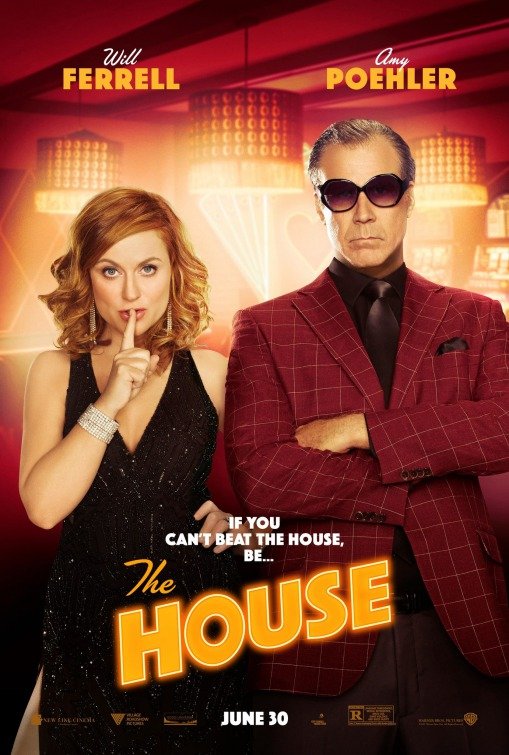 THE HOUSE is a slipshod, R-rated numskull comedy. Will Ferrell and Amy Poehler star as Scott and Kate, two well-meaning but incompetent parents faced with a terrible problem. The town mayor has decided to cancel the city’s college scholarship to the best student in town, Scott and Kate’s daughter, and build a lavish community pool instead. With no money to pay for the daughter’s college tuition, Scott and Kate team up with their friend to run an illegal gambling casino. Comical, even violent, complications ensue.

THE HOUSE earns a few funny clean laughs. However, the opening is poorly put together, and this problem crops up a few more times. The result is that the comedy never really takes off. THE HOUSE is rated R. From the beginning, the movie is loaded with many “f” words. There are also a few strong profanities, though not many. THE HOUSE also contains some extreme comic violence, with blood, and an abhorrent promotion of marijuana use. Finally, the main characters get away with their illegal activities, so there’s no consequences for their bad behavior in THE HOUSE.

(PaPaPa, FRFR, B, P, LLL, VVV, S, NN, AA, DD, MMM) Very strong pagan worldview with strong antinomian or lawless elements, set in a comical context, where main characters get away with some illegal activities, plus some light moral, pro-family content where parents are concerned about their daughter’s future and where some family bonds and love are shown, and a patriotic nod to first responders in times of violence or disaster in a song during the end credits; at least 106 obscenities (mostly “f” words), four strong profanities and seven light profanities, plus one or two obscenities during end credits, one obscene gesture, and woman with a hangover vomits in a plastic container at a container store; some extreme, strong and light comic violence includes man with axe threatening man accidentally cuts off one of man’s fingers, and it bleeds profusely over the man with an ax as he tries to put the finger back on other man’s hand, bloodied ax man wanders in a daze through house turned illegal casino with a lot of people and out the back door into the woods, men scuffle so characters set up a makeshift boxing ring for them to box, and one man knocks out other man with one single punch, two women get into a scuffle, and they also fight in the ring using some really hurtful moves and kicks and punches, a few pratfalls, main characters fight gangsters, one man’s hand is cut off with ax, and his arm’s set on fire, and people throw alcohol on him to put out the flames, but this of course just makes things worse, man chases characters in one extended scene, and there’s some heavy fighting such as man knocks other man brutally against wall by flying at him with his feet, and some threats of violence occur; implied adulterous sex, implied marital sex, talk about adultery, talk about marital sex, a few crude jokes about things like oral sex and self-abuse; brief shots of upper female nudity in background, photo of a chalk outline of a male sex organ on a high school football field, and some rear male nudity; alcohol use and drunkenness; scenes of marijuana use promoting marijuana, woman admits she’s addicted to marijuana, a couple men snort cocaine, and cocaine blows all over small crowd of people (including a policeman) when policeman raids an illegal gambling joint; and, gambling, running an illegal casino and trying to hide it from the authorities, extortion, kidnapping, talk embezzlement, lying, and male protagonist enjoys calling himself “The Butcher” and his wife enjoys calling herself “The Burner” as they engage in enforcing their criminal loan sharking activities.

THE HOUSE is a slipshod numskull comedy about two goofy parents who fail to have a backup plan to pay for their daughter’s college tuition, so they run an illegal casino at their friend’s large home, with disastrous, comical results. THE HOUSE earns a few genuinely funny clean laughs, but most of it is a criminal foul-mouthed disaster, with extreme comic violence in several scenes and an abhorrent promotion of chronic marijuana use.

In the first act, the town’s corrupt mayor deprives Scott and Kate Johansen of the city’s college scholarship for their intelligent daughter, Alex. Suddenly, Scott and Kate realize they have no way of paying for her tuition at their own alma mater. They can’t even get a loan.

Instead of admitting the problem to Alex, Scott and Kate cook up a scheme with their gambling-addicted friend, Frank. Frank’s marriage is headed for divorce because of his addiction. He reminds Scott and Kate of the gambling adage that “the House always wins.” So, they decide to use Frank’s house to run an illegal gambling casino, with a secret entrance leading through the woods behind Frank’s home to a 24-hour supermarket. Frank figures that, within a month, they can earn $500,000, meaning Scott and Kate would get $250,000, enough to pay for their daughter’s tuition, books and living expenses.

Of course, the plans of mice and men often go awry, so the saying goes. Scott and Kate start to really embrace their roles as casino moguls and start to behave like gangsters in a Martin Scorsese movie. In fact, they actually make references to Scorsese’s movie about a gangster in Las Vegas, CASINO. So, when they catch a real, small-time gangster counting cards in their casino, they take him into Frank’s garage and threaten him. The man calls their bluff, so Scott takes an ax hanging on the wall and threatens the man. Again, the man calls their bluff. So, Scott starts swinging the ax and accidentally cuts off one of the man’s fingers. Soon, Scott is exiting the garage covered in blood while Kate and Frank drop the man off at the hospital.

Though Scott begins to suffer PTSD from the event, he and Kate continue to embrace their new gangster personas. They learn that Frank has been loaning out money to the local gamblers who frequent their illegal casino. Some of them include their neighbors and friends, but this doesn’t stop Scott and Kate from acting like loan shark enforcers.

How far will they go? Will they eventually get caught? What happens if their daughter finds out what they’re doing?

A simple description of the story to THE HOUSE shows the comical potential to this movie. Sadly, though, THE HOUSE is a slipshod numskull comedy. The father can’t even do simple arithmetic. Worse, the mother boasts of her own college days, where she was known for drinking, smoking a lot of marijuana and urinating outdoors. Though the movie picks up in the middle, the opening is very poorly done and unconvincing. This problem arises more times in other parts of THE HOUSE.

In addition to all this, THE HOUSE is rated R. So, from the beginning, the movie is loaded with many “f” words. There are also a few strong profanities, though not very many. Happily, the sexual references are kept to a minimum. There is, for example, a reference to a prankster drawing a large male genital on the football field and references to the parents being able to enjoy their sex life at home once the daughter’s away at college, but that’s about it. However, the movie contains scenes of extreme comic violence. That includes a couple fights the parents and their friend stage at the casino to earn money, the bloody chopped finger scene, and a scene with a man on fire. None of the more extreme violence is really funny, by the way.

Finally, the worldview in THE HOUSE is decidedly pagan. That’s partly because, in the end, the parents get away with their crimes and are finally able to use some of the gambling money to fund their daughter’s college education at their alma mater. Thus, crime does pay in THE HOUSE.

Also, once again, a Hollywood movie heavily promotes and makes light of marijuana use. Not only does the mother resume her college marijuana addiction, but the daughter and her friends one night are shown smoking marijuana in the family home when the parents come home stinking drunk. With movies like THE HOUSE promoting frequent recreational marijuana use, is it any wonder that the dumbed-down voters in states like California and Colorado have allowed this harmful drug to be sold openly on the public streets? Such irrational leftist/libertarian policies are destroying society and its children (see GOING TO POT by William J. Bennett and Robert A. White, 2015).

On a side note, the high cost of college tuition is a major problem, but a big cause of the ever-increasing cost of college is government funding of college, including college tuition. Also, the idea that most people should get a college degree is a false assumption. Many job skills can be taught by other, cheaper means. Experience can be just as important, for example. Finally, because of the infiltration of many colleges by overpaid, incompetent, and ill-informed radical leftist ideologues, parents and their children should be much more careful about spending lots of money to attend many of today’s colleges.