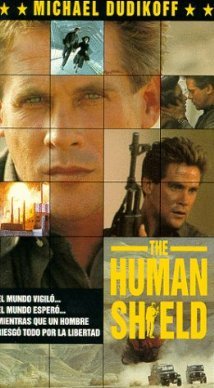 THE HUMAN SHIELD is an awful attempt to exploit the Gulf War with a thin melodramatic story about an American military advisor who attempts to rescue his brother from the clutches of a swarthy, snarling black-hearted Iraqi general. This is a true B-movie, the sort of low-rent filler that played at drive-ins decades ago and is a waste of time today.

THE HUMAN SHIELD is an awful film celebrating Desert Storm. We first see military advisor Doug Matthews in Iran in 1985 facing off against the Iraqi general Ali Dallal. Five years later, as Americans are clearing out of Iraq, Doug’s diabetic brother, Steve, is captured by Dallal. Doug, who somehow made it back to America, hears the bad news and sets off to rescue his brother. As Doug closes in, Dallal goes from bad to REALLY bad: machine gunning an innocent village, double-crossing right and left, beating and raping his beautiful wife, Lila, and then ordering her killed. Why? Because she loves Doug. In fact, she married Dallal in order to free Doug in 1985. Of course, Doug rescues Lila and Steve in the nick of time, and Doug and Dallal duke it out, with the latter meeting a fiery demise in a chemical plant.

THE HUMAN SHIELD looks cheesy from the opening credits, with sloppy editing, lounge-act music and a directing job by veteran Ted Post that appears to have been phoned in. An American-Israeli co-production, it tries to avenge Iraq’s Scud missile attacks of 1991. However, there is little to be gained by answering a Scud with a dud.