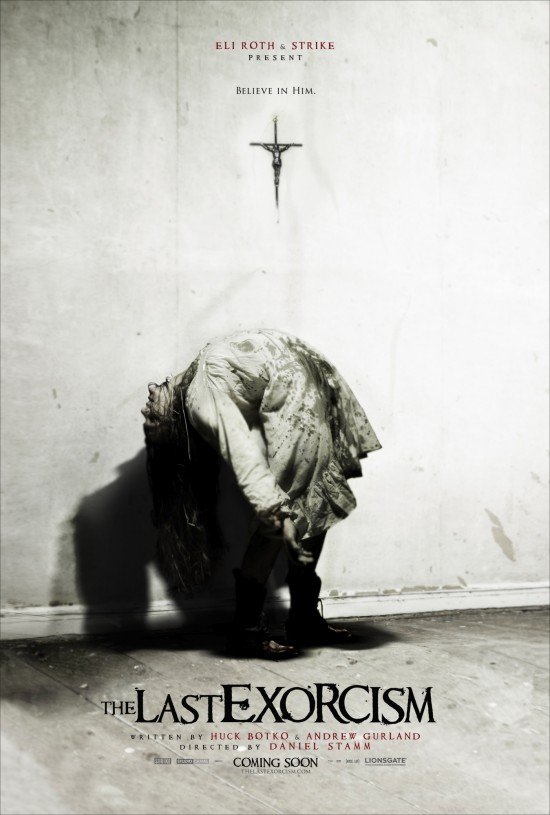 THE LAST EXORCISM is a horror movie about a young Christian preacher who has lost what little faith he had. Rev. Cotton Marcus has invited two young documentary filmmakers to witness his last fake exorcism in the back woods of Louisiana. He shows them how he performs a phony exorcism of a 16-year-old girl that convinces her and her gullible father. Later, however, the girl appears to be truly possessed. She’s also pregnant with a demon baby due to the evil machinations of a secret Satanic cult. Cotton seems to regain his faith in Jesus, but will it be enough to stop the cult’s evil plans?

THE LAST EXORCISM is helped a lot by Patrick Fabian’s appealing performance as Rev. Cotton. Even so, although THE LAST EXORCISM shows Cotton regaining his faith in Jesus, the movie indicates the Satanists probably killed him. There’s a sliver of hope at the end, but an earlier scene indicates otherwise. Thus, THE LAST EXORCISM, like many other horror movies today, fails to show any real victory over the evil forces confronting the protagonist. It also has two strong profanities and very strong, somewhat bloody, scary violence.

THE LAST EXORCISM is a horror movie about a young Christian preacher who has lost what little faith he had. The Rev. Cotton Marcus has invited two young documentary filmmakers to witness his last fake exorcism. Cotton believes that exorcisms, especially when dealing with children, sometimes lead to the deaths of children, so he’s on a crusade to expose them all as phony or silly.

Cotton and the two filmmakers travel to the back woods of Louisiana, where Cotton plans to perform a phony exorcism on a 16-year-old homeschooled girl named Nell. Apparently, Nell has been falling into trances and killing her father’s farm animals.

At the farm, everything goes as planned. Cotton performs a phony exorcism that convinces the girl and her father, who left his local church because he didn’t believe the pastor was strong enough in the Lord or the Bible.

The next day, Cotton and the filmmakers visit the farm to see how Nell is doing. They find out that Nell has stabbed her brother in the face. They agree to look after Nell while the father takes Nell’s brother to the hospital. They unlock the door to Nell’s bedroom, despite some strange sounds coming from it.

Tired after their exploits, Cotton and the filmmakers take a nap. While they’re sleeping, Nell takes the camera, stabs the family cat in the barn and tries to attack Cotton.

After this episode, Cotton and the filmmakers decide Nell’s father had the right idea. So, they lock her in her bedroom.

More strange sounds come from Nell’s bedroom. Cotton enters and finds the room in disarray, with Nell sitting on top of the dresser. Meanwhile, he and the filmmakers hear a message on the telephone from Nell’s doctor at the hospital report that Nell is pregnant. They believe that Nell’s father is the culprit and decide they have to protect Nell from him.

When the father returns, he forces Cotton at gunpoint to perform a real exorcism on Nell. Cotton discovers there may be a real demon inside Nell. Cotton agrees to perform it, because he’s afraid the father will kill Nell if he doesn’t. Happily, this exorcism also seems to go well. The demon seems to come out of Nell, and Nell confesses she’s slept with a boy down at a nearby café.

Cotton calls the pastor at the local church. The pastor and Nell’s father reconcile, and Cotton leaves the pastor at the farm to help them. While traveling back home, however, Cotton and the filmmakers talk to the boy at the nearby café. The boy is clearly a homosexual, and Nell has clearly lied. Is she still possessed by a demon, or suffering from some other mental illness?

Cotton and the filmmakers rush back to the farm. The farmhouse is completely dark and empty. Strange noises are coming from the woods. There, Cotton and the filmmakers find a Satanic cult performing some kind of ritual on Nell, who appears to be pregnant with a demonic child. The Satanists have also blindfolded Nell’s father and tied him to a tree. Will Cotton’s newfound faith help him save Nell and her father?

All the scenes in THE LAST EXORCISM are filmed by someone holding the camera that the documentary filmmakers have brought with them to expose the exorcism racket. MOVIEGUIDE® is not a big fan of such gimmicks, but the technique is handled well in this case. The movie is helped a lot by Patrick Fabian’s appealing, straightforward performance as Rev. Cotton. A convincing scary performance by Ashley Bell as Nell adds to the movie.

That said, the supernatural situations that finally develop are fairly predictable, somewhat silly and cliché. Also, although people are killed at the end, the movie leaves the fate of Rev. Cotton open, perhaps for a sequel. This leads to an unsatisfying outcome.

Of course, everyone knows that God’s church has some phony leaders. Jesus predicts as much when he says in Matthew 7:21-23, “Not everyone who says to me, ‘Lord, Lord,’ will enter the kingdom of heaven, but only he who does the will of my Father who is in heaven. Many will say to me on that day, ‘Lord, Lord, did we not prophesy in your name, and in your name drive out demons and perform many miracles?’ Then I will tell them plainly, ‘I never knew you. Away from me, you evildoers!’”

Even so, although THE LAST EXORCISM shows Cotton regaining his faith in Jesus, the movie indicates that the Satanists probably killed him. There’s a sliver of hope at the end that he may have survived since neither his death nor his dead body are shown. However, earlier in the movie, Cotton sees a drawing by Nell where he and the two filmmakers are dead. The drawing foreshadows the ending.

Thus, in the end, THE LAST EXORCISM, like many other horror movies today, fails to show any real victory over the evil forces confronting the protagonists. It also has two strong profanities, some light profanities, and very strong, somewhat bloody, scary violence. Finally, despite Cotton’s newfound faith, the movie does show Christians to be gullible, especially more charismatic Christians.