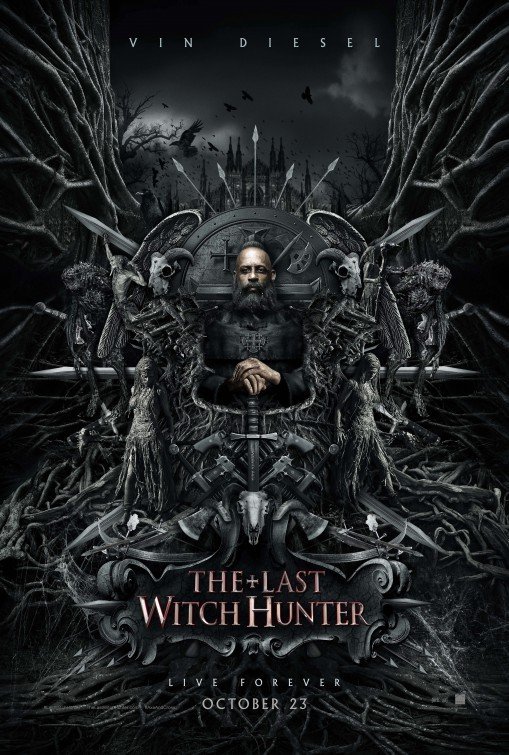 THE LAST WITCH HUNTER stars Vin Diesel as Kaulder, an immortal, witch-hunting knight in modern day New York trying to stop a plot by evil witches trying to resurrect their queen. About 800 years ago, Kaulder killed their queen, but she cast a curse on him, making him immortal. Now, Kaulder serves an organization called The Axe and the Cross. Using his immortality, they’ve established a truce with the witches, who’ve agreed not to use their powers on human beings. However, a group of evil witches is trying to resurrect their queen so she can unleash a global plague to kill all humans.

THE LAST WITCH HUNTER tells an exciting, but violent, story. The acting is spot on, but there are a couple silly lines of dialogue. Also, the plot is a bit convoluted. The bigger problem, besides the scary violence, is the movie’s worldview. It has some positive elements, including positive Christian content. However, despite the movie’s condemnation of using witchcraft on human beings, the hero uses a witch to help him defeat the evil witches. This makes THE LAST WITCH HUNTER unacceptable viewing.

(PaPa, CC, BB, OO, E, L, VVV, A, DD, M) Strong syncretistic pagan worldview with strong Christian, moral and occult elements about fighting evil witches who are part of a “race” of witches, but also with some help from “good” witches who have agreed not to use witchcraft on human beings, and who can be punished by a council of witches if they do, after being exposed by an immortal human agent or knight working for a church council, plus a couple times the human agent uses occult means himself to stop an evil plot by the evil witches trying to resurrect their evil queen, and some mostly implied environmentalism; five light obscenities and one light My God profanity; very strong scary violence but not very bloody, such as witch creature stabbed with sword, scary demonic-looking witch creatures attack warriors, witches trap people with spells, witches trap man and woman using wood and tree limbs encircling their bodies, images of a witch’s heart which has a tree-like texture to it, female witch puts hand through man’s chest and says she’s making him immortal as his skin starts to light up from within, dying man’s body becomes magically somewhat skeletal, witch’s large tree lair burns, scary flies threaten people, fighting, hero fights giant monster creature which looks like a scary, baroque-looking moving tree, images of two dead bodies, evil warlock tries to lure boy with gummy bear tree, but hero wakes boy up from the illusion, evil warlock appears to hero as a little girl and then changes back to attack hero, characters fall, hero’s shoulder impaled, gunfire; no sex; no nudity, but women in skimpy outfits in a couple scenes with apparent female cleavage but shot from afar so as not to be terribly overt; alcohol use; no smoking but woman seems to use magical substance like a drug when she wipes it on her face, and man takes a potion to retrieve a lost memory from long ago; and, betrayal and villains try to trap and fool heroes.

THE LAST WITCH HUNTER stars Vin Diesel as an immortal, witch-hunting knight in modern day New York trying to stop an evil plot by evil witches trying to resurrect their queen to destroy the human race with a global plague. THE LAST WITCH HUNTER is reasonably entertaining and well acted, but the movie’s fight between good and evil is theologically and morally syncretistic where the semi-Christian hero enlists the help of a “good” witch and her power to defeat the evil witches.

The plot of THE LAST WITCH HUNTER envisions a world where witches are an ancient race of beings with supernatural, occult powers. In the past, the evil witch queen tried to destroy the human race with a plague, but she was killed by a warrior Christian knight, Kaulder. The movie opens with Kaulder, played by Vin Diesel, and a group of other warriors, along with their priest, Father Dolan, going to the queen’s tree lair to destroy her. Before Kaulder kills her, the evil queen curses Kaulder by making him immortal.

Kaulder is the immortal witch hunter for an organization called The Axe and the Cross. He tracks down evil witches who use their magical powers on human beings, to endanger human society or similar evil that would harm humans. With Kaulder’s help, The Axe and the Cross has established a truce between witches and humans. As long as the witches don’t use their magic on humans, they are free to use their powers among themselves. Sometimes, Kaulder can simply defuse a situation, such as stopping a teenage witch from accidentally combining some magical “weather runes” that creates a storm endangering a commercial plane in flight. Other times, however, a really evil witch is judged by a church council and sent to the council of witches, who agree to imprison the evildoer in a special magical prison.

Assisting Kaulder on his hunt for evil witches is a special Christian priest, who takes on the name of Kaulder’s original priest, Father Dolan. Each Dolan writes down Kaulder’s exploits against evil witches, as a record for posterity as well as a way for the next Dolan to know as much about Kaulder as possible so they can become a true friend and confidante. Kaulder is now on his 36th Dolan, who has served with Kaulder for 50 years. Played by renowned British actor Michael Caine, Father Dolan is now retiring. Kaulder gifts Dolan with a special pen to commemorate their 50 years together. He also meets the new Father Dolan, played by Elijah Wood.

The next morning, the new Dolan tells Kaulder that the 36th Dolan has died in his sleep. They go to Dolan’s place, where Kaulder discovers an evil curse was put on Dolan, who’s in a deep coma and barely alive. He will die if Kaulder doesn’t kill the evil witch who put the curse on Dolan.

Kaulder and the new Dolan’s investigation leads Kaulder to an evil warlock named Belial. Kaulder learns that Belial is trying to resurrect the evil witch queen he killed 800 years ago. He also learns that the secret to knowing how to stop Belial’s evil plan lies in recovering a lost memory from the day he killed the evil queen. He tries to get help from a young witch named Chloe, who’s able to magically help people remember the past.

Everything leads to a final confrontation with Belial and the evil witch queen. The lives of every single human being are at stake.

THE LAST WITCH HUNTER tells an exciting, but violent, story. The acting is good, but there are a couple silly lines of dialogue toward the end. The plot is a bit convoluted, however, with too much having to be explained.

The bigger problem with THE LAST WITCH HUNTER, besides the scary violence, is the movie’s worldview. It has some positive elements, including some positive Christian elements and references. However, although the movie clearly says it’s wrong for the race of witches to use their magical powers and spells on human beings, the hero uses occult magic to help him stop the evil plot to destroy the human race. Thus, Kaulder uses Chloe’s powers to retrieve his lost memory. He also uses her powers to help him stop the witch queen from finalizing a spell to unleash a new, but worldwide, plague upon the human race. There’s at least one other instance of using witchcraft to stop the evil witches. Otherwise, however, it’s mostly Kaulder’s knowledge about the witches and their ways, his strength and his righteous character that help him in his work against the evil witches.

That brings up another theological, moral problem with this movie: the idea that witches can be good. In the world created by THE LAST WITCH HUNTER, witchcraft isn’t just a choice, it’s a power that’s held by a race of supernatural beings separate from humans. Thus, it’s good that the movie posits it’s evil to use witchcraft against human beings, but it’s bad that the movie says witchcraft and occult powers can be used among other beings created by God or that they can be used to fight evil. The God of the Bible says that ANY use of such powers is evil (see Deuteronomy 18:9-14 and Galatians 5:19-21). The Bible also admonishes us in Romans 12:21, “Overcome evil with good.”

For these reasons, MOVIEGUIDE® believes THE LAST WITCH HUNTER is unacceptable viewing overall. The movie’s worldview is too syncretistic and not Christian enough. It’s also too occult. The filmmakers do keep the foul language to a bare minimum, however.