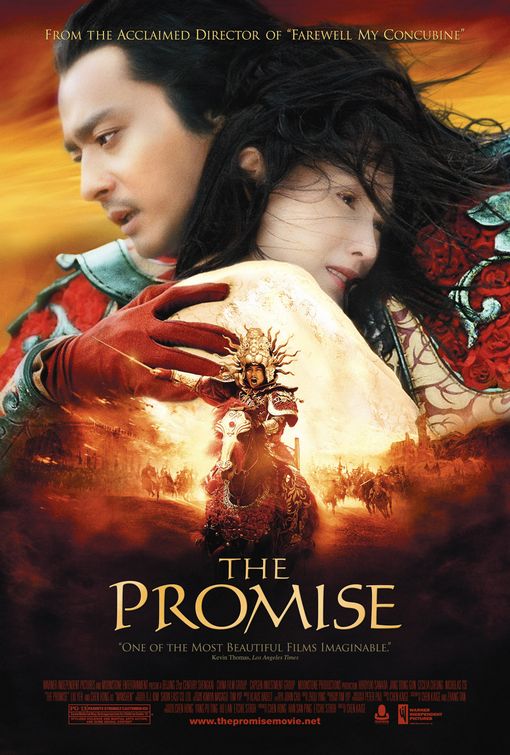 THE PROMISE is an epic fantasy about a woman struggling to overcome an otherworldly promise. In the midst of warfare and starvation, a young orphaned girl accepts a deal with a goddess that will haunt her for the rest of her life. She can have all the food she wants and will always have great beauty, but every man with whom she falls in love will die. As a young woman, she has become the adopted daughter of the King, and eventually two warriors rescue her from an assassin. As both men eventually fall for her, the bargain she made as a child threatens to stir tragedy.

Visually imaginative and surreal, THE PROMISE is the most expensively produced feature in Chinese cinema history. The movie has delirious action scenes and dreamlike cinematography, but also suffers from a bloated plot. Ultimately, the movie puts a timeless, classic question debated into a Romanticized, secular context: Are the lives of human beings predetermined, or do we have free will? THE PROMISE has a Romantic worldview and contains graphic violence, but also has minor biblical elements advocating protecting the weak and oppressed. MOVIEGUIDE(r) advises extreme caution.

(RoRo, B, FRFR, VVV, S, N, M) Strong Romantic worldview with some biblical elements concerning protecting the weak and oppressed, with some references to ancient Asian mysticism; no foul language; many scenes of graphic violence including a number of swordfights, scenes of war combat, and men being trampled by bulls; one brief scene of implied fornication; brief naturalistic nudity including a woman’s back while bathing, and upper frontal male nudity; no alcohol; no smoking or drug use; and, a child steals food, slavery, and deception.

THE PROMISE is a stylish, epic fantasy packed with delirious action scenes, dreamlike cinematography and a bloated plot. Visually imaginative and unabashedly surreal, the movie is the most expensively produced feature in Chinese cinema history.

The movie begins in a war-stricken countryside where dead soldiers hang from the trees. As a girl named Qingcheng is searching for food, she suddenly becomes strung up from a trap, and hangs from the trees with the corpses. A young boy offers to help her if she agrees to become his slave, an offer she accepts but quickly relinquishes after she is set free. While fleeing, a goddess informs Qingcheng that her mother is dead and makes a bargain with her. She is told that she can have all the food she wants, as well as the most attractive clothing, and men will be smitten by her beauty for the rest of her life, but every man with whom she falls in love will die. Qingcheng accepts these conditions, and her choice haunts her days ahead.

The story jumps ahead roughly 20 years later, where Qingcheng (Cecilia Cheung) has become the adopted daughter of the King (Cheng Qian), and the nation is still in the midst of warfare. After winning a brutal battle, General Guangming (Hiroyuki Sanada) learns that the King is in danger. He and his assistant Kunlun, who possesses super-human speed, set out to rescue him. Chaotic circumstances cause them to hastily rescue Qingcheng, and both men eventually end up falling in love with her. Meanwhile, both the assassin Wuhuan (Nicholas Tse) and the King’s men search to find them.

Featuring exquisite CGI atmospherics, THE PROMISE does a fine job luring the audience into its alternate universe. The story is too muddled, however, to complement its nicely shot battle scenes and otherworldly landscape. Ultimately, the movie puts a classic question into a Romanticized, secular context: Are the lives of human beings predetermined, or do we have free will? The goddess Manshen tells Qingcheng as a young girl, “Once you have accepted your destiny, nothing can alter it unless time flows backwards, snow falls in the spring, and the dead come back to life. What follows is Qingcheng’s struggle to overturn what appears to be her destiny.

THE PROMISE has a Romantic worldview and contains graphic violence, but also has minor biblical elements advocating protecting the weak and oppressed. MOVIEGUIDE(r) advises extreme caution for adults.