THE SECRET WORLD OF ARRIETTY 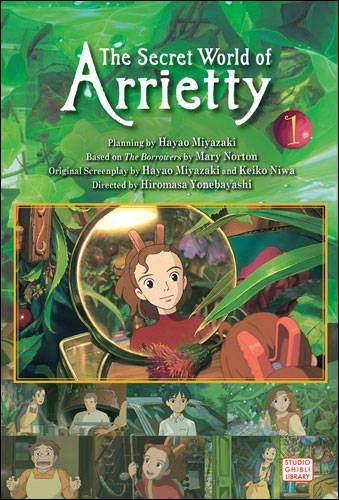 THE SECRET WORLD OF ARRIETTY is a Japanese animated movie dubbed into English by Disney. It’s based on the children’s novel THE BORROWERS by Mary Norton. The story focuses on 14-year-old Arrietty. She’s a tiny girl whose family of diminutive people borrows items from the people living in an old country house. Things change when a young boy named Shawn moves into the house to improve his health in the country air. One day Shawn discovers Arrietty. They become friends, but Arrietty’s world turns upside down when the mean housekeeper finds out. The woman becomes relentless in discovering the little people and stamping them out.

THE SECRET WORLD OF ARRIETTY is a visually engaging movie with a compelling story of friendship, family and the importance of human life. These uplifting elements are marred by a Romantic, environmentalist message. For instance, the movie pits the powerful humans living in the house with the powerless “borrowers” who “take only what they need.” This becomes a euphemism for the movie’s environmentalist message. Even so, THE SECRET WORLD OF ARRIETTY is full of beautiful depictions of nature that add much to its stunning visual qualities.

(BB, Ro, EE, V, M) Strong moral worldview with elements extolling family and friendship, but marred by a Romantic, environmentalist message of taking “only what you need”; no foul language; some light adventure violence such as cat chases tiny people and tiny people try to avoid humans as they sneak around a house; no sex; no nudity; no alcohol use; no smoking or drugs; and, stealing not fully rebuked and there’s a theme of fate.

THE SECRET WORLD OF ARRIETTY is a visually engaging movie with a compelling story of friendship, family and the importance of human life.

Based on the 20th Century children’s novel THE BORROWERS by Mary Norton, the movie tells the story of a 14-year-old girl named Arietty. She and her family are tiny people known as “borrowers” who live under the floor of an old house. They survive off of “borrowing” food and other needed items from the humans who live in the house.

Arrietty and her family have managed to avoid being detected by living a simple life, enjoying each other’s company in their home under the house, and maintaining no contact with the outside world, especially humans. Things change when a young boy named Shawn (voice of David Henrie) moves into the house to improve his health in the country air. An unfortunate occurrence on a borrowing trip inside the house leads Shawn to discover Arrietty. Reluctantly, she forms a relationship with a human – the intimidating figure she’s been taught her entire life to fear.

When housekeeper Haru (voiced by Carol Burnett) catches wind of Shawn’s sudden interest in peeking under the floorboards of the house, she’s relentless in discovering the little people and stamping them out. Arrietty finds her tiny world turned upside down and must seek help in places she never thought she would go.

THE SECRET WORLD OF ARRIETTY is saturated with environmental references, showcasing the beauty of the environment and using the juxtaposition of the powerful humans living in the house against the seemingly powerless borrowers who “take only what they need.” This becomes a euphemism for an environmentalist message. However, the beautiful depictions of nature throughout the movie add much to its overwhelmingly visual qualities.

SECRET WORLD also deals with themes of fate and immortality, as referenced in the Shawn character, who is a young boy dealing with a terminal illness. He makes mention of his acceptance of the fact that he’s dying and can do nothing about it.

The theme of family is an important one, as Arrietty is shown to rely on her family and respect her parents. Disobedience is not tolerated. When Arietty disobeys her parents and goes to see Shawn, she is punished with serious ramifications.

Originated by Studio Ghibli, THE SECRET WORLD OF ARRIETTY was originally released in Japan in 2010, and became the highest grossing film for that entire year. The Disney English-dubbed version will be sure to enjoy success with child and adult audiences everywhere.

Rent or Buy THE SECRET WORLD OF ARRIETTY: