"Adventure, Laughter and a Whole Lot of Blue" 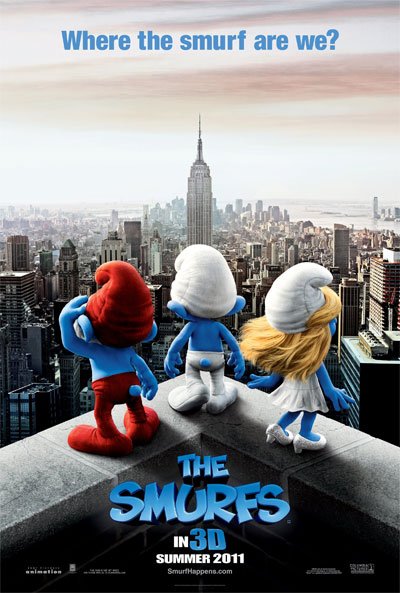 THE SMURFS brings the famous blue TV characters to life – and to New York City, the Big Apple. The evil wizard Gargamel chases a select group of Smurfs out of their village, through a magic portal, and into Central Park in New York City. Infatuated by the city but ignorant of all things human, the explorers, led by the distinguished, wise Papa Smurf, must find a way to return home and escape the clutches of Gargamel, who wants to use their Smurf essence to make powerful potions. Clumsy gets separated from his friends and falls into a box belonging to Patrick Winslow, a young executive. Patrick unknowingly takes Clumsy home. In a wonderful affirmation of family values and friendship, the other Smurfs vow to rescue him.

Children will enjoy the simple, classic fairytale plot line as Gargamel chases the Smurfs from adventure to adventure around the Big Apple. THE SMURFS gets a little frenetic at times, but what ultimately comes through is the heart of the movie. At the end of the day, the Smurfs will never hesitate to sacrifice their own happiness – even their life – to save a fellow Smurf.

(BB, C, CapCap, Ho, PaPa, O, L, V, N, A) Strong moral worldview overall with some redemptive elements of sacrifice, some strong capitalist elements of competition and advertisements, with some light implied homosexual content, including a comment by Smurfette that she “kissed a Smurf, and [she] liked it” (alluding to the homo-erotic song by Katy Perry, “I kissed a girl, and I liked it”), marred by some strong pagan magic that’s lightly occult, but the focus is on making a moral statement about good triumphing over evil and the value of family and friendship over getting ahead and getting rich; no explicit foul language (but at times the use of the word “Smurf” to replace an obvious obscenity, e.g., “Smurf me” is annoying), one blasphemous comment about how a character can go and work for God if they fail at their job, and a few scatological jokes, such as “I think I just Smurfed in my mouth”; lots of light action and comic violence such as plenty of chases, destruction of Smurf village, Gargamel gets smashed by a tree trunk defense system, a Smurf throws a human a punch, a human attempts to beat Smurfs with umbrella, Gargamel viciously whacks a (digital) cat and sucks Smurfs into a leaf vaccum in order to extract their essence via torture, Smurfs attack Gargamel with golf balls, Smurfette throws nail in (digital) cat’s mouth, Gargamel is sent flying through the air and upon landing is smashed by a bus; no sex scenes or crudity but Smurfette puts on a sexy dress and stands on top of vent replicating the famous Marilyn Monroe scene, sexy models staff a party to sell cosmetic products with their looks; upper male Smurf nudity; cocktail party in central park for product launch; no smoking or drugs; and, nothing else objectionable.

THE SMURFS is full of adventure and fun, and it certainly delivers on a whole lot of blue as ninety-nine animated Smurfs, each endowed with a distinct personality, and the blond bombshell but-oh-so-pure-at-heart Smurfette arrive on the big screen.

When the evil wizard Gargamel chases a select group of Smurfs out of their village, through a magic portal, and into our world, they land in New York City’s Central Park. Infatuated by the city but ignorant of all things human, the explorers, led by the distinguished and wise Papa Smurf must find a way to escape the clutches of their arch-nemesis (who wants them for their Smurf essence, from which he can make powerful potions) and get back home.

On a deeper level, the movie traces the coming-of-age and self-realization of Clumsy Smurf who, in spite of his inner call to greatness, just can’t ever seem to get things right. Although his brother and sister Smurfs love him in spite of his weaknesses, Clumsy is marginalized and not allowed to join in all the Smurf games, for fear that he will inadvertently hurt someone.

Shortly after arriving in New York, Clumsy gets separated from his friends and falls into a box belonging to Patrick Winslow, a young marketing executive, who takes him home. In a wonderful affirmation of family values and friendship, the other Smurfs vow to find Clumsy and rescue him, but instead end up scaring Patrick and his pregnant wife, Grace, out of their wits when they come face-to-face with the little blue creatures for the first time in their apartment.

Children will enjoy the simple, classic fairytale plot line as Gargamel chases the Smurfs from adventure to adventure around the Big Apple. At the same time, parents (especially those familiar with Peyo’s original stories) will no doubt enjoy reflecting upon how the fictional characters of their childhood still have a lot to teach about the value of sticking together, putting family first, and realizing that happiness cannot be measured in terms of financial or material success.

While the hybrid animation will not appeal to everyone and THE SMURFS gets a little frenetic at times, what ultimately comes through is the heart of the movie. Smurfs believe the best in everyone. At the end of the day, they will never hesitate to sacrifice their own happiness – even their life – to save a fellow Smurf. And, when it comes to the final battle for their freedom against the evil Gargamel, Papa Smurf and the whole clan have to recognize just how valuable the accident prone but heroically-hearted Clumsy can be. In the end, THE SMURFS affirms that human beings, like their little blue friends, are not defined by their weaknesses, whatever those might be, but by a transcendent and heroic capacity for love and self-sacrifice in times of need.