"Marred by Lots of Ultraviolence and Strong Foul Language" 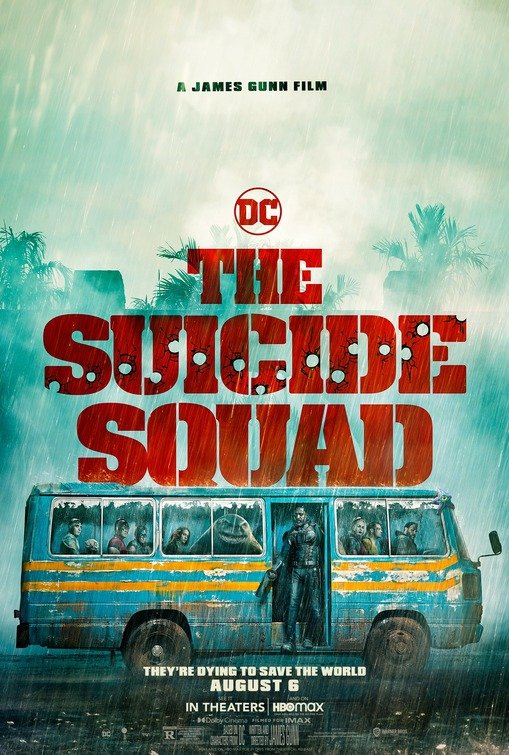 THE SUICIDE SQUAD is an attempted reboot of a 2016 DC Comics movie from Warner Brothers. The United States government bargains with 13 supervillains serving time in prison to storm a small Latin American island nation called Corto Maltese. The country has suffered a military coup, and the new tyrants plan to unleash a mysterious apocalyptic alien technology against America and the world. The supervillains are split into two teams, but one team is nearly wiped out, leaving only six supervillains, plus their commander, Colonel Flagg, to finish the suicide mission.

The first part of THE SUICIDE SQUAD displays a lot of brutal, bloody fighting along with the movie’s ever present obscene language. However, by the time the second half rolls around, the script has inserted a softer side into some of the characters. As a result, the movie becomes more more interesting, more fun, more heroic, and more redemptive. The violence is still very strong, but not quite as brutal. Sadly, though, the foul language and “f” words never go away. So, MOVIEGUIDE® deems THE SUICIDE SQUAD excessive and unacceptable.

(PaPa, BB, C, AC, FR, AP, LLL, VVV, S, NN, A, M):
Dominant Worldview and Other Worldview Content/Elements:
Strong mixed pagan worldview in a science fiction action thriller about using some villains to stop a group of bigger villains, with some moral elements, and some light Christian, redemptive elements where some villains redeem themselves in fighting a large mind controlling alien, and the villains trying to use the alien to gain power, one character uses the Sign of the Cross after a harrowing situation, and a character makes a hopeful comment about God and adds Jesus when a man asks her what about Jesus Christ but the woman then adds she’ll take the help of any god he wants to mention, plus American government officials are revealed to be duplicitous down through the years
Foul Language:
At least 61 obscenities (mostly “f” words), 10 GD profanities, four light OMG profanities, an obscene gesture
Violence:
A significant amount of extreme bloody violence, and lots of strong action violence includes man’s face blown off, man’s head explodes, man kills a tiny bird with a hard rubber ball and wipes off the blood on his jeans, creatures tear a couple people in two, shark creature cuts off a man’s head and crunches down on it to eat it, shark creature eats a three or so other humans, shark creature tears off a piece of a giant alien starfish creature to eat it, many explosions, floor collapses repeatedly under the foot of one main character, giant starfish alien spawns two or three bunches of small starfish creatures that glom onto people’s faces for the giant alien can control their minds, lots of machine gun fire, two big men fight and try to strangle one another, woman shoots man point blank, characters fight soldiers in multiple fight scenes shot like a war movie, woman is tortured with electric shocks, part of a large tower falls onto a group of soldiers, etc.
Sex:
Passionate kissing and implied fornication, and woman makes a euphemistic reference during oral sex while being tortured with electricity
Nudity:
Brief upper female nudity when main characters exit a nightclub through the dressing room of some female dancers, and some upper male nudity
Alcohol Use:
Some alcohol use
Smoking and/or Drug Use and Abuse:
No smoking or drugs; and,
Miscellaneous Immorality:
Threats, government conspiracy and cover up, betrayal, man shouts at his daughter and verbally chastises her using foul language when she comes to visit him in prison, and after he hears she’s been arrested for a petty crime, but it’s clear he cares about her welfare, which is why he’s so angry, though he hasn’t been the best father in the world.

THE SUICIDE SQUAD is an attempted reboot of a 2016 DC Comics movie where the United States government bargains with 13 supervillains serving time in prison to storm a small Latin American island nation that’s suffered a military coup and plans to unleash a mysterious apocalyptic alien technology against America and the world. Reminiscent of a hyped-up DIRTY DOZEN movie, THE SUICIDE SQUAD has a bloody ultraviolent first act and is filled with abundant foul language, but it tries to recover a semblance of humanity by bringing out some human feelings, quirky moral standards and heroism among the supervillain team.

The movie opens by quickly introducing eight of the supervillains, who serving prison sentences in Belle Reve Penitentiary. Among the group is The Joker’s ex-girlfriend, Harley Quinn (Margot Robbie). Commanding them is a military commando named Colonel Rick Flagg (Joel Kinnamon). Amanda Waller (Viola Davis), the tough-as-nails head of the federal government’s Suicide Squad black ops program, tells the team that the tiny island nation of Corto Maltese in Latin America has suffered a military coup, led by two virulent anti-American fanatics, a general and a wealthy politician. Waller tells them the U.S. government is afraid that the General and the new President are getting ready to unleash an attack on the America and the rest of the world using a mysterious apocalyptic alien technology called Project Starfish. The group of six supervillains is assigned to land on one side of the island at night. As usual, Waller has implanted explosive devices in everyone’s head in case they think about deserting the mission.

When Harley Quinn, Col. Flagg and the other supervillains land on the beach from a helicopter that ditched them a few yards offshore, they are met with a massive attack by the General’s forces. Harley is captured, Flagg escapes, one supervillain drowns, and the others die a brutal, bloody death.

The movie flashes back to before the beach assault. Waller is gathering the other five supervillains she wants to use on the mission. Among them is Robert DuBois, an African American supervillain known as Bloodsport who once put Superman in an ICU by shooting a kryptonite bullet into the Man of Steel. DuBois refuses to participate, so Waller threatens to put his teenage daughter in jail after she was caught stealing. Reluctantly, Dubois agrees.

Because of his military experience, DuBois is put in charge of the second team, which includes Peacemaker, Polka-Dot Man, a young woman named Ratcatcher 2, and King Shark, who’s late father was known in Hawaii as “the King of All Sharks” and believed to be the Shark God. After landing on the opposite side of the island nation, the team mistakes a group of rebels as part of the new military faction ruling the country. They kill them, but run into Colonel Flagg, who’s talking to their female leader. The leader clearly isn’t happy about her men being killed, but she needs their help of the rebels are going to overthrow the brutal military junta.

Cut to the General and the new President touring the Project Starfish facility, located in a large gray tower. Leading the Project is a scientist who has enhanced his mental abilities with implants, and who’s known as The Thinker. The movie reveals that the project is not an alien technology, but a giant starfish-looking alien with a large eye in the middle where his arms meet. The alien can release tiny starfish creatures that can glom onto a person’s face and control them. The Thinker and the previous administration on Corto Maltese have been providing the creature with human victims to control. The more human victims it controls, the larger and more powerful it gets. The General and the new President plan to use the creature to infiltrate the United States and other places to control the power they hold.

Waller instructs Flagg and Waller to sneak into the capital city to kidnap The Thinker and force him to help them infiltrate the tower and blow up the whole facility. Meanwhile, Harley Quinn is being wined and dined by the new President, who wants to make her his wife.

Complications ensue when the team tries to destroy Project Starfish. Also, a terrible secret about Project Starfish is revealed, which leads to a conflict within the Suicide Squad.

The first part of THE SUICIDE SQUAD displays a lot of brutal, bloody fighting along with the movie’s ever present obscene language. However, by the time the second half rolls around, the script has inserted a softer side into some of the characters. For example, Ratcatcher 2’s real name is Cleo. She’s the daughter of the first Ratcatcher. While living in Portugal, Cleo’s father had a drug addiction and eventually died, but he taught her how to use his equipment to control rats. Cleo tries to reach out to King Shark, who has a propensity to eat humans. She recognizes that King Shark is so irritable because he has no friends. Also, the movie reveals that Polka-Dot Man became a villain because his mother performed scientific experiments on him and his siblings. She transformed him into a mutant human, or meta-human, and giving him the power to spawn colorful energy-filled dots on his body and expel them as weapons, including bombs and little buzzsaws. Of course, the reason Robert DuBois aka Bloodsport became part of the Suicide Squad is to save his daughter from a criminal lifestyle in prison. However, when he realizes the true implications of Project Starfish, he receives a stronger sense of urgency and purpose.

As a result of this change, THE SUICIDE SQUAD becomes more interesting, more entertaining, more heroic, and more redemptive. The violence is still rather graphic, but not quite as extreme. Sadly, though, the foul language and “f” words never totally go away. There are also about 10 strong GD profanities. All told, therefore, MOVIEGUIDE® deems THE SUICIDE SQUAD excessive and unacceptable.