THE TEXAS CHAINSAW MASSACRE: THE BEGINNING

"Demonic Origins of a Demonic Family" 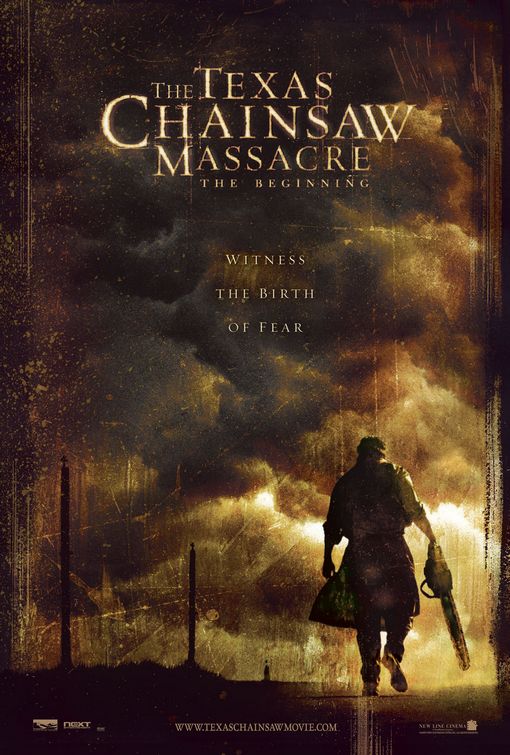 THE TEXAS CHAINSAW MASSACRE: THE BEGINNING tells the origins of the cannibalistic Hewitt clan. The local slaughterhouse closes down. Tommy, the facially deformed, adopted son, refuses to leave and murders the manager. His Uncle Hoyt murders the sheriff who comes to arrest Tommy. Then Uncle Hoyt, who is criminally insane, decides that the family can survive by capturing, killing and eating any stranger who shows up. "We will never go hungry again," he vows. Hoyt decides their first victims will be three young couples, including a couple of Hells Angel bikers.

Like its previous gory incarnations, THE TEXAS CHAINSAW MASSACRE: THE BEGINNING is a despicable, torturous concoction. A bigger budget cannot redeem such violent media insanity. There is nothing redemptive about this bloody, gruesome and offensive exercise, especially since the demonic villains win. Making the whole affair even more demonic is that the villainous, warped Hoyt says grace before the family's cannibalistic meals and proudly claims to be a veteran. If people stop going to these kinds of contemptible horror movies, Hollywood will stop making them, or at least make fewer of them. Please help MOVIEGUIDE® with a donation through www.movieguide.org or by calling 1-800-899-6684.

(OOO, FRFR, AbAb, B, C, LLL, VVV, S, N, MM) Very strong demonic worldview that perverts religion, including Christianity, in some brief pieces of dialogue and where cannibalistic killers run free while indulging their insane bloodlust in living color, head villain says grace before cannibalistic meals and uses Christian language and proudly claims to be a veteran, and goodness is defeated, even when people are prepared to risk their lives to save their friends and loved ones; about 76 obscenities (including many "f" words) and eight strong profanities; extremely bloody and gruesome violence includes implied chainsaw murder with blood afterwards, man sticks running chainsaw through another man's torso, jeep slams into cow, human body parts prepared for eating, throat cut, point black shootings, man saws legs off with chainsaw, man cuts off another man's face and wears it, two other chainsaw victims, man bashes another man's head with sledge hammer, bloody birthing scene, talk about cannibalism, people tied up and tied down, etc.; kissing, woman in underwear lies on top of man but their foreplay is interrupted before anything much happens, and killer kisses and caresses one of his younger female victims but more to taunt her rather than really do anything, it seems; upper male nudity and woman in underwear; no alcohol use; no smoking; and, kidnapping, civilian man poses as a sheriff after killing the real sheriff who is on his last day in a town that has died and disbanded, attempted robbery, cruelty, and man taunts his victims.

THE TEXAS CHAINSAW MASSACRE: THE BEGINNING is about what one would expect from a violent horror movie like this these days, but with a bigger budget. Production-wise, it may be a cut above (ha ha) the original 1974 movie, but it’s still pretty disgusting material. Hopefully, the movie won’t create any real-life copycat crimes like a recent school rape and shooting in Colorado did. Don’t count on that, however.

The movie opens in 1939 with the sudden birth of a deformed boy at an isolated Texas slaughterhouse. The child is left in a dumpster, where he is found by Luda Mae Hewitt. Luda Mae takes him home. She names the boy Tommy. When Tommy grows up, he works at the slaughterhouse, like the heavyset mother who abandoned him.

Cut to 1969. The slaughterhouse is forced to close. Tommy refuses to leave the building, however, and he murders the slaughterhouse manager. The town’s remaining sheriff shows up at the Hewitt home and demands to arrest Tommy. Hoyt, who may be Luda Mae’s brother, brother-in-law or something else (the movie is deliberately unclear), murders the sheriff, however, and assumes the role of sheriff. Hoyt, who is criminally insane, decides that the family will cannibalize the sheriff. He also decides that, although the local town has died, the family can survive by capturing, killing and eating any stranger who shows up. “We will never go hungry again,” he vows.

Cut to Eric Hill and his younger brother Dean. Dean has been drafted, so Eric decides to re-enlist in the Marine Corps and return to Vietnam to help his brother. Their girlfriends, Chrissie and Bailey, are along for the ride down to the induction center. Unknown to Eric, however, Dean intends to dodge the draft and head to Mexico with Bailey.

While driving to the induction center, a female Hell’s Angel biker chases the group’s jeep, propelling them into a serious accident. Chrissie is thrown from the vehicle. As the biker tries to rob the injured trio, Hoyt shows up dressed as the sheriff, shoots the biker dead and forcibly takes Eric, Dean and Bailey, as well as the biker’s corpse, back to the Hewitt house. Of course, the Hewitts plan to eat them, after Tommy has carved them up. Before that happens, however, Hoyt taunts his victims. Chrissie secretly witnesses the horrors the Hewitt clan inflicts on her friends. She realizes she may be their only hope of survival.

Like its previous gory incarnations, THE TEXAS CHAINSAW MASSACRE: THE BEGINNING is a despicable, torturous concoction. A bigger budget and better acting cannot redeem such violent media insanity. There is nothing redemptive about this bloody, gruesome and offensive exercise, especially if the demonic villains win. Making the whole affair even more demonic is that the mentally deranged Hoyt says grace before the family’s cannibalistic meals and proudly claims to be a veteran.

MOVIEGUIDE® understands that a certain part of the moviegoing audience likes scary horror movies. But, why can’t more of the villains be an atheist, or a witch, or a Communist, or an anti-Christian bigot? And, why can’t the good guys win for a change? Perhaps that’s a sign of the lack of any moral conscience in the filmmakers who make such heinous gore-fests. Of course, if people stop going to these kinds of contemptible horror movies, Hollywood will stop making them, or at least make fewer of them. Sadly, however, because it doesn’t cost much money to make them and because they seem to be getting more popular, the number of these despicable movies is growing. Please help MOVIEGUIDE® convince more people not to see these movies by making a donation through www.movieguide.org or by calling 1-800-899-6684.