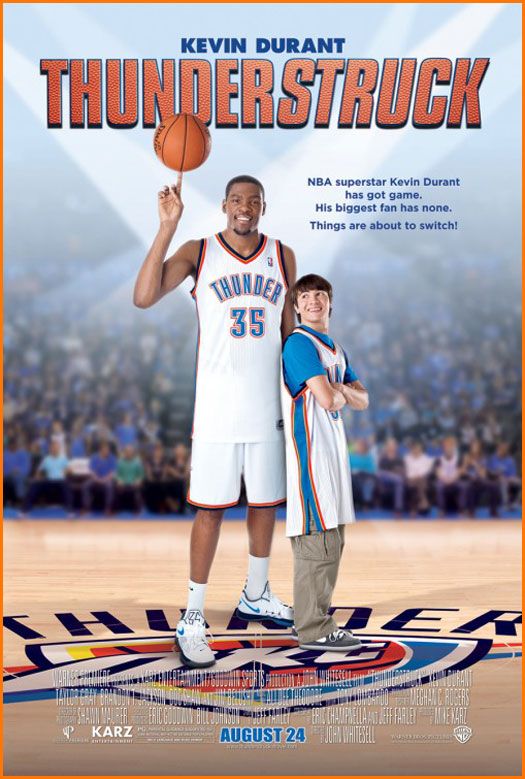 THUNDERSTRUCK is a family sports comedy. It opens by contrasting the basketball ineptitude of Brian, a towel boy on a high school team, with the astounding abilities of Kevin Durant, star of the Oklahoma City Thunder. Brian becomes the laughing stock of his school when videos of his spectacular inabilities are played in the lunchroom. Brian’s father tries to make him feel better by taking him to a Thunder game. Brian gets a chance to receive a signed basketball from Kevin Durant. In the course of the exchange, a magical transfer occurs. Now, Kevin becomes inept, and Brian suddenly can do astounding things with a basketball. Brian becomes a star athlete, but his pride gets in his way. He loses his friends and turns off the girl he sought to impress.

THUNDERSTRUCK is clearly aimed at boys who dream of being a star. It’s enjoyable to see the klutzy guy become the star, only to wind up learning a lesson about the dangers of pride. Caution is advised for the magical element in THUNDERSTRUCK.

(Pa, B, V, M) Light mixed pagan worldview featuring a magical event of a magical transfer of athletic ability from a professional basketball star to a bumbling towel boy on a high school basketball team with a moral message about humility being better than pride, but at the height of the young man’s display of pride he announces he is a “basketball god,” but he is quickly corrected and put on a path back to humility which, to his credit, he chooses; no actual obscenity or profanity but the milder equivalents of “jerk,” “Holy crap” are each used once; some intentional pushing and shoving in a basketball game but no other violence; no sex; no nudity, but there are girls in bikinis at a party and scantily clad professional basketball cheerleaders; no drinking; no smoking or drugs; and, some instances where high school students take pleasure in ridiculing other students.

THUNDERSTRUCK is a sports comedy about a magical transfer of athletic ability from Oklahoma City basketball star Kevin Durant to a bumbling towel boy on a high school basketball team. With a mild warning about a few insulting comments and the existence of the magic element, the movie is to be commended for its message that humility is better than pride.

The movie opens by contrasting the complete athletic ineptitude of Brian (Taylor Gray) with the astounding abilities of Kevin Durant. Brian is made the laughing stock of his school when videos of his spectacular inabilities are played in the lunchroom just as he approaches the beautiful new girl at the school, Isabel (Tristin Mays).

Brian’s Dad tries to make him feel better by taking him to an Oklahoma City Thunder game. Brian wins the chance to attempt a half-court shot for $20,000. His shot is so far off it hits the mascot, but this leads to an opportunity to receive a signed basketball handed to him by Kevin Durant. In the course of the exchange, Brian wishes he had Kevin’s talent and a magical transfer occurs. Kevin becomes inept, and Brian suddenly can do astounding things with a basketball.

Those who enjoyed mocking Brian in the past are left in his tracks. He goes from towel boy to star, to ball hog, to such a snoot he calls himself a “basketball god.” In the process, his team wins a lot of games, but he loses his old friends and turns off Isabel, whom he’s tried so hard to impress. Meanwhile, Kevin Durant goes into something far worse than a slump. He’s ridiculed for his horrible play, but through it all just works and works to try to get back “his game.”

THUNDERSTRUCK is clearly aimed at young boys who dream of being a star. Slow in a few places, it’s enjoyable to see the klutz become the star only to learn a lesson about the dangers of pride. Caution is advised for younger children because of the high school setting and the magical transfer.