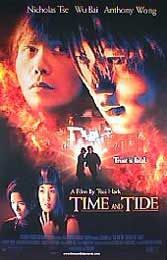 TIME AND TIDE is a violent crime story from Hong Kong director Tsui Hark about the friendship between a young man named Tyler working for a shady bodyguard outfit and an ex-mercenary named Jack. Tyler and Jack get caught in the crossfire between two criminal gangs and the Hong Kong police. One of the gangs, a South American outfit from Jack’s past, has come to murder the mobster whom Tyler’s company is hired to protect. They threaten Jack’s wife to force him to take part in their assassination plot, and the mobster they want to kill is Jack’s wife’s father.

TIME AND TIDE is beautifully shot, but it ignores the storyline at several points and contains extreme violence, some sexual immorality and an anti-biblical conclusion. Also, sex, drugs, alcohol, theft, and crime are all extolled. Even the commander of the police who eventually thwarts the criminals condones Jack’s illegal activity and murders, and lets him go free. At the end of the movie, Tyler says that God has created trouble and confusion, which He can’t solve himself. This blasphemous denigration of God’s character erases any redeeming elements in the movie, of which there are very few

Director Tsui Hark is internationally renowned for his mastery of Hong Kong style of high octane, MTV, ultra-violent filmmaking. In America, he is probably best known for his work with Jean Claude Van Damme, an actor whom audiences can easily forget. In spite of his poor choice of material and inarticulate dramaturgy, Tsui Hark has an incredible sense of style. There is something in his movie TIME AND TIDE to offend everyone, except those who are mesmerized by high octane violence, who will be overjoyed by the almost plotless pushing the envelope of grotesque pain and suffering.

The story is the least important element in TIME AND TIDE. In fact, at several points, the impressionistic MTV style ignores the story completely.

Thus, if you really want to know the story, get a copy of the production notes. Purportedly, it’s about a 21-year-old streetwise kid in Hong Kong named Tyler who joins a shady bodyguard service because he owes money to the boss. Tyler then gets involved in endless violent confrontations with Hong Kong gangsters, who are known as cockroaches. The cockroach metaphor gives the audience an idea about the inhumanity with which people are treated.

Tyler fantasizes about escaping Honk Kong to live in a South American paradise. Somehow, the movie cuts to a violent robbery in South America where Jack, 35, is wiping out a gang of soldiers or mercenaries or crooks dressed as soldiers. Jack’s boss accuses him of stealing. Somehow, he gets the upper hand and gets back to Hong Kong where his wife is waiting for him. Jack’s wife is very pregnant with child.

Tyler is in a similar, but less honorable, position. In the beginning of the movie, Tyler knocked up a lesbian police detective who hates him and is also very pregnant with his child. He tries to support her with his illicit funds. Slowly, she takes a liking to him, which he doesn’t know.

Later, Jack and Tyler meet at the birthday party of a mobster whom Tyler’s company is guarding. The gangland kingpin just happens to be the long-estranged father of Jack’s wife.

Pregnancy and revenge come to a climax when the entire South American gang shows up to wipe out Jack’s father-in-law. The movie then becomes an endless series of battles, heightened in intensity because Jack’s wife is giving birth in the basement of a coliseum with bullets flying overhead. Of course, the reason for the birth is to give the audience something innocent to care about. After all, if everybody’s a cockroach, who cares if they die? However, nobody wants the baby to die. Therefore, the battle over the baby becomes the most emotional moment in the movie.

Like many of these movies, there is a homage paid to values. In the beginning, Tyler paraphrases Genesis 1, which would make one think this movie is going to have some biblical basis. At the end of the movie, however, Tyler says the “Boss,” referring to God, created everything but that what He created was trouble and confusion, which He can’t solve himself. The only good thing that God created, Tyler says, is hope, and the movie focuses on the newborn baby as a symbol of that hope.

This blasphemous denigration of God’s character totally erases any redeeming elements in the movie, of which there are very few. God did not create evil; he created free will. Thus, the trouble and confusion in our world is the result of man’s evil, of man’s lack of goodness, not God’s. As Paul says in Romans 3:11, quoting Psalm 14, “There is no one righteous, not even one; there is no one who understands, no one who seeks God.” It is God, therefore, who brings people to Him, not the people themselves. To quote John 1:9 and 1:12-13, Jesus Christ “gives light to every man. . . . Yet, to all who received Him, to those who believed in His Name, he gave the right to become children of God – children born not of natural descent, nor of human decision or a husband’s will, but born of God.”

If we were speculating on this front, we might say that Tsui Hark is rebelling against the Anglican influence of the British, the Bosses who controlled Honk Kong up until they turned Hong Kong over to China. So, perhaps, this denigration of God is also a rebellion against God’s Church.

For those who have made movies their God, TIME AND TIDE is an extremely beautifully photographed and edited movie. It goes beyond CROUCHING TIGER, HIDDEN DRAGON and THE MATRIX to create martial arts violence which is even more balletic and artistic. The acting is also intense and finely crafted. Regrettably, style has completely won out over substance. In fact, one might say even that Form has become Content. Regrettably, however, the content of TIME AND TIDE’s Style and Form is violence and death, rather than truth, beauty, justice, and goodness.

Sex, drugs, alcohol, theft, and crime are all extolled in TIME AND TIDE. Even the commander of the police who eventually thwarts the criminals condones Jack’s illegal activity and murders, and lets him go free. Therefore, there is no justice in this movie. There’s only murder and violence as a way of life, and there’s no difference between the good and the bad, except the good are slightly more photogenic and ultimately more competent in defending themselves and protecting their loved ones.

One can only hope that teenage audiences don’t discover TIME AND TIDE. It is a potent lesson in murder and mayhem. That’s a lesson civilization does not need.

Runtime: TIME AND TIDE is beautifully shot, but it ignores the storyline at several points and contains extreme violence, some sexual immorality and an anti-biblical conclusion. Also, sex, drugs, alcohol, theft, and crime are all extolled. Even the commander of the police who eventually thwarts the criminals condones Jack’s illegal activity and murders, and lets him go free. At the end of the movie, Tyler says that God has created trouble and confusion, which He can’t solve himself. This blasphemous denigration of God’s character erases any redeeming elements in the movie, of which there are very few.