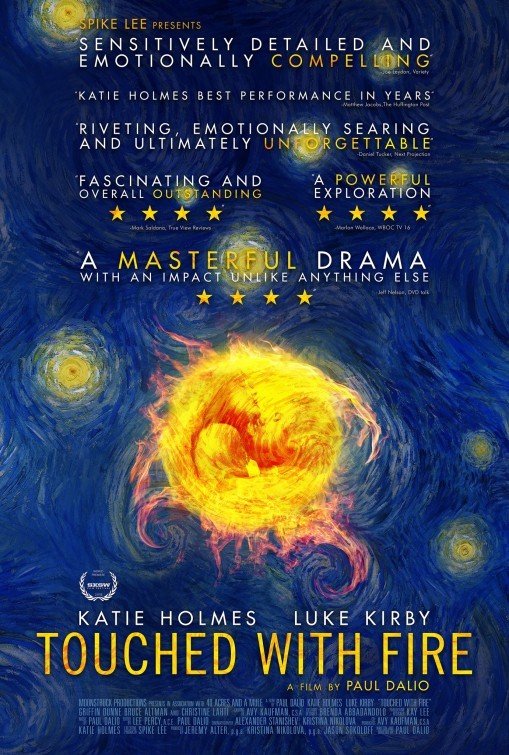 TOUCHED WITH FIRE is an artistic drama about two people living with bipolar disorder. Carla and Marco meet in a psychiatric ward. They fall in love and vow to raise a family. Their relationship causes consternation in their two families. The families are also concerned when Marco decides not to take his medicine because he doesn’t like how it affects his mind. This causes some problems when Carla becomes pregnant with their baby.

Based on the book by Dr. Kay Redfield Jamison, TOUCHED WITH FIRE raises awareness about adults living with bipolar disorder trying to maintain some sort of normalcy and the daily challenges they face. The movie has some touching and dramatic moments, including a scene extolling the virtues of using the Bible as a guide to treating other people better. However, the movie also contains some long conversations, heavy scenes and overdone poetic voiceovers showcasing the gift Marco and Carla both have for poetry. Finally, the movie has some disturbing violence, lots of foul language, and Romantic, politically correct and immoral behavior. Ultimately, TOUCHED WITH FIRE is an unacceptable movie.

(PaPa, BB, C, RoRo, PCPC, Fe, LLL, VV, SS, NN, AA, D, MM) Strong mixed pagan worldview with some strong moral elements and light redemptive elements as bipolar patients receive love and compassion from family and friends, an implication that God gives gifts to all His children and that includes the mentally ill, man sees Bible at mental hospital and tells doctors who treat their patients harshly should follow the principles in the Bible instead, and bipolar patients honor their parents in some ways, but mitigated by some strong Romantic elements as the two main characters make emotional and immoral decisions based on their romance, and female protagonist decides to abort her baby on the advice of her mother without the father’s support at first, so there’s a strong politically correct liberal or leftist defense of that behavior; at least 31 obscenities and profanities, including bipolar patients yell profanities at their parents and doctors; strong disturbing violence or implied violence includes woman in bathtub rubs razor along her legs implying she’s thinking about cutting herself, man puts a gun in his mouth and almost commits suicide, doctors strap woman down to a bed and force her down, man kicks a nurse, man throws books at his doctor, guards grab a man and throw him in an isolation room on the ground, and upset bipolar man grabs his pregnant girlfriend by the shirt and throws her to the ground, so woman decides to follow her mother’s advice and abort her baby because of the mental health issues facing her and her boyfriend; strong sexual content includes unmarried man and woman go home together and sleep in same bed, man and woman take off each other’s clothes and lay on the couch together, man and woman swim shirtless in river; some partial and implied nudity includes woman swims in the river and outline of breasts show through wet T-shirt and man washes woman’s naked back and a quick shot of the outline of breast is shown; alcohol use and drunkenness, including woman drinks a bottle of wine alone in bathtub, woman clings to wine when she’s depressed, man drinks alcohol alone at his dad’s house; light smoking, man smokes cigarettes outside his house, bipolar patients forced to take lithium in the hospital, and mentally ill people take a handful of pills in the hospital; and strong miscellaneous immorality includes lying, abortion, bad role models, inhumane treatment of patients in hospital, and dysfunctional relationships.

TOUCHED WITH FIRE is based on an insightful book by Dr. Kay Redfield Jamison, who focused on highly creative artists living with bipolar disorder. Dr. Jamison was one of the first to look at the positives intertwined with bipolar disorder and the need to treat mentally ill people more as people and not patients. Writer/Director Paul Dalio took this informative book and made it into TOUCHED WITH FIRE, a story about two bipolar people, Carla and Marco, but the movie has mixed negative and positive content that makes it unacceptable viewing.

Carla (Katie Holmes) and Marco (Luke Kirby) are two adults struggling to make sense of their mental illness. Carla becomes obsessed with discovering who she is and what makes her this way. After many sleepless nights due to insomnia, she decides to check herself into a mental hospital. There she meets Marco, who has recently been admitted, but not on his own terms. During a group therapy session, the two hit it off as they both discover their love for poetry. They begin to meet every night and spend hours with each other writing poetry and discussing the wonders of artists with bipolar disorder, their favorite being Vincent Van Gogh. The doctors instruct them to stay apart because they are enhancing each other’s manic side, but they refuse. They are in love.

The doctors try to tear them apart, but Marco violently lashes out, and Carla screams in agony. They throw Marco in an isolation room and chain Carla to a bed, showing some of the harsh practices used on patients. Months later, they are both released.

Carla moves back with her mothers, while Marco moves back with his father, further demonstrating the tragedy that these adults may never be able to function totally on their own. When they recover from their manic episode, they both go back to the hospital numerous times, begging for the other’s information to contact them, but the doctors refuse to give out the info. One day Marco brings a Van Gogh book to the hospital and writes in all CAPS “Meet me at the art museum, I’m there everyday at 3 p.m.” When Carla finds the book and opens it, her heart leaps for joy, knowing Marco has been trying to contact her too.

Carla meets him at the museum where the two rekindle their old flame. They spend every day together, going on long car trips, writing poetry, hiking mountains, and wading in creeks. When Carla’s mother finds out she’s dating a man she met at the psychiatric ward, she’s not pleased. Carla and Marco sit their parents down to tell them they are in love and are going to move in together. However, Carla’s parents are further enraged when Marco tells them he isn’t going to take his medicine because he doesn’t like the effects it has on his mind. Marco’s father sides with Carla’s parents and disapproves of this idea, but Marco doesn’t listen to them.

Months later, Carla finds out she is pregnant. She and Marco are overjoyed, calling it their miracle baby. Carla’s mother advises them to get an abortion because it will not have a sound life under the home of two mentally ill parents, but they refuse. One night when Marco and Carla are painting the baby’s room, Marco becomes angry because he isn’t on his medicine and throws Carla across the floor. He apologizes, but the damage has been done.

The next day, Carla leaves the house. When she returns, Marco has planned a surprise baby shower for her, but Carla confesses she just got an abortion. Marco yells in agony demanding to know why she killed their “prince.” Will they be able to heal the new rift between them?

TOUCHED WITH FIRE has some touching, heartfelt and intense dramatic moments about dealing with mental illness. However, some of the scenes contain long-winded dialogue with poetic voiceovers that were not as interesting as they should have been.

TOUCHED WITH FIRE also has some strong positive moral elements and light redemptive elements about giving and receiving love and compassion. There are intense scenes of the doctors at the mental health facility dealing harshly with the two lead characters. At one point, the doctors are encouraged to follow what the Bible says about treating other people kindly.

However, this positive content is mitigated by the Romantic behavior of the two lead characters where they make emotional and immoral decisions. For example, they engage in premarital sex, and the male protagonist decides to go off his meds, despite the consequences of that decision. Of course, the most egregious event is the woman’s decision to get an abortion. The rest of the movie after that decision lends support for her evil decision. Thus, the Romantic elements eventually become politically correct. This outcome shows the terrible influence that the Anti-Christian, Anti-biblical, intellectually stupefying “feminist” left can have on our popular culture. After all, why can’t Carla and Marco decide to give up their baby for adoption?

Finally, the movie’s ending suggests that the mutual interest in the beauty of poetry brings solace, reconciliation and even happiness to the two lead characters. Although artistic beauty is definitely a positive thing created by God for our enjoyment, edification and even our spiritual enrichment, eventually it should lead you back to God and His plan for your life. Ultimately, therefore, the Beauty in God’s universe does not conflict with His moral law or His plan of salvation for fallen human beings.

Because of all its negative elements, which also include lots of foul language, some disturbing violence and strong sexual content, TOUCHED WITH FIRE is not an acceptable movie.