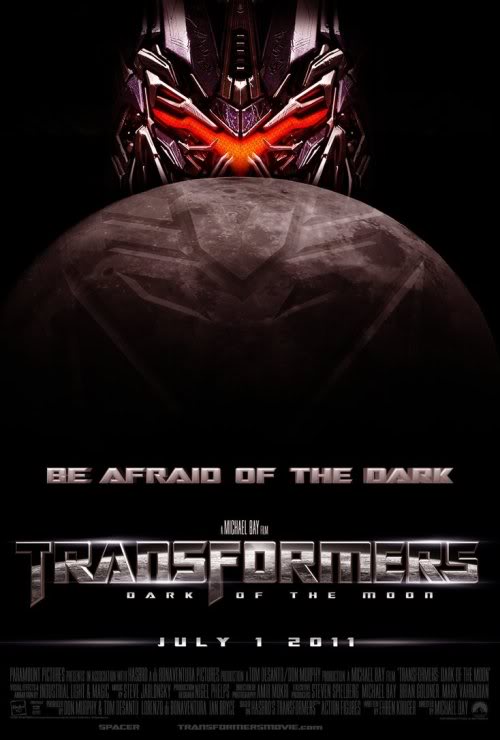 TRANSFORMERS: DARK OF THE MOON returns to the formula that made the first movie successful. This time, Sam has a new job and a new girlfriend. At his new job, a strange Chinese gentleman accosts Sam and passes him secret papers. An evil Decepticon robot kills the man, and Sam reunites with the leader of the good Autobots, Optimus Prime. They learn about the crash landing decades earlier on the moon of an Autobot carrying some devices the Autobots can use in their war against the Decepticons. They also learn the Decepticons plan to take over Earth. Thus, Sam and the Autobots unite to protect humanity.

DARK OF THE MOON is much better than TRANSFORMERS 2. It has a straightforward plot, a clear story of good over evil and better character development. That said, the ending does not have enough heartfelt emotion. The good news is that TRANSFORMERS 3 has much patriotic content, some prayers, the heroes use a cathedral to hide, and the movie clearly opposes dictatorship, communism and even Islam. However, there’s foul language, some crude jokes and lots of violent action. So, strong caution is warranted for TRANSFORMERS 3.

(CCC, BBB, PPP, Pa, PC, RH, Acap, Ho, LLL, VV, S, M) Very strong Christian, moral, patriotic worldview of good overcoming evil with overt Christian references, including a soldier says only Jesus can save them now during the final climactic battle and including specific points about the value of the freedom of the few versus the will of the many, positive portrayals of soldiers, wariness of big government, the heroes hide in a cathedral, and a negative portrayal of the evil Decepticon robot leader who seems to be dressed like a Muslim, a couple other prayers, and lead heroic robot Optimus Prime tells people you need to pray, marred by some pagan immoral elements that includes sexually charged language, some liberal possibilities and questionable statements about Republicans, Obama gives Sam a medal, disturbing conspiratorial revisionist history, an anti-capitalist element where a businessman turns out to be a villain, a couple homosexual jokes and a character acts like a homosexual, plus a positive portrayal of Fox News and Bill O’Reilly; 37 obscenities and seven profanities, and a cry for God help us as well as some edgy sexually charged language, one character’s name is “Wang” and accosts man in restroom where he pulls secret papers out of the zipper on his pants; lots and lots of strong action violence except villain robots have, people blown up shot, crushed, fall, some people tortured, people electrocuted, with many battles throughout; some sexual allusions including couple in bed with woman in panties on top of man but nothing else shown, a couple homosexual jokes, one character acts homosexual, and sexually charged language, including by heroes mother; no nudity but woman in panties; no alcohol; no smoking; and, betrayal, human being betrays humanity, robot betrays robots, dishonesty, and young hero’s parents act more childish than he does.

Just to get this out of the way, the third TRANSFORMERS movie, TRANSFORMERS: DARK OF THE MOON, is much better than TRANSOFRMERS 2. It has a straight-ahead plot and a clear story of good over evil. That said, it’s not a great movie, because it tries to pack a lot of action into a short time frame.

The movie opens with Sam (played by Shia LaBeouf) living with his girlfriend and upset that his parents are going to find out he doesn’t have a job after graduating from an Ivy League college. Several firms reject him, including one where he tells them he won a medal from Obama, and they say, “We’re all Republicans here.” Finally, he gets hired by a firm run by Bruce, a strange character played by John Malkovich. He’s hired because his girlfriend Carly’s boss, Dylan, has put in a good word for him.

At the same time as Sam is searching for a job to give his life meaning, the Autobots are shown helping mankind by getting rid of a nuclear reactor in the Middle East and trying to solve an alien Decepticon problem at Chernobyl. Secret papers reveal that the space race to the moon was all about the crash landing of Autobot Sentinel Prime’s spaceship on the dark side of the moon. It’s revealed that the Decepticons won the war on their home planet, and Sentinel Prime barely escaped with some devices that could have saved the Autobots, if only he had not crashed on the moon.

Meanwhile, Sam is accosted by a crazy Chinese character in the men’s room where he works. The man, whose name is Wang, and calls himself by the disgusting moniker of “deep Wang,” passes on to him some pages describing an evil plan by the Decepticons to take over the world. A Decepticon kills Wang, and Sam reunites with Optimus Prime, the leader of the Autobots. Sam discovers Carly’s boss is in cahoots with the Decepticons. Sentinel Prime may hold the key for the Decepticons to conquer Earth. Thus, the race is on to save the world.

DARK OF THE MOON has a lot of thrilling action. It has the advantage of having a straightforward plot. Right at the beginning, the audience knows the Decepticons want to take over the world and the Autobots, who are hopelessly outnumbered, need to save it with Sam’s help. In the process, Sam works together with an elite group of Marines and our favorite cast members from the past movies. By and large, the characters are better developed in TRANSFORMERS 3, and the action is defined well.

That said, the movie’s ending does not have the heartfelt emotion of the first movie. Instead of having a powerful standoff, the movie ends with all guns blazing, like a gigantic fireworks display. Thus, the ending is entertaining and spectacular, but not inspiring.

The good news is that TRANSFORMERS 3 has a lot of patriotic content, some prayers, the heroes hide at one point in a cathedral, and the movie clearly opposes dictatorship, communism and even Islam. In fact, the evil Decepticons look like Muslims in dress and speech, and one of the first targets is a Middle Eastern nuclear site. Also, the Russians are still bad guys.

Sadly, the movie uses the revisionist history storyline becoming so common in Hollywood: in this case, the noble JFK-initiated race to the moon becomes a massive conspiracy. Furthermore, Sam’s parents are just goofy, and his mother is more sexually charged than necessary. Sam seems to be the adult, and his parents seem to be the children. Finally, Dylan appears to be another villain of Big Business who’ll do anything to make money, including betraying humanity. In fact, there are too many villains in the movie.

Finally, although there’s not as much sexual innuendo in TRANSFORMERS 3 as the second movie, there is a bedroom scene and crude innuendo. Also, unlike the previous movies, there are a couple very annoying homosexual jokes. For example, the Chinese informant Wang produces the secret documents through his zipper.

All in all, therefore, TRANSFORMERS 3 is not a movie for children, and strong caution is advised.