"Boring Search for a Story" 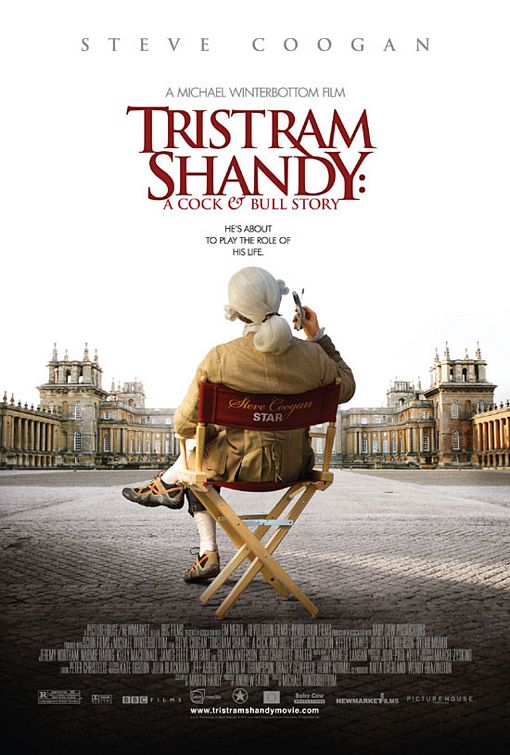 TRISTRAM SHANDY: A COCK AND BULL STORY is a comedy based on a 1760's novel that was so complex that no one thought it could be made into a movie. This movie fails to deliver. The movie-within-a-movie is a dull story of procrastination. Starring Steve Coogan as Tristram Shandy, the movie begins with Steve noting that this is a cock and bull story, with its sexual meaning. Tristram's birth is repeated throughout the movie with the doctor crushing his head with just invented forceps. Growing up, Tristram has his private part chushed in a window. Steve has affairs, which everyone discusses. His co-actors talk about who has a bigger role, and jokes are made about homophobia.

If the explanation of the movie seems convoluted, it's because the movie is. Everyone in the film procrastinates, and the movie does as well. It is the most dull, tedious procrastinating, and uninteresting movies of all time. Those willing to look past its nudity, sex, and violence at the attempt to see a deconstructed movie may find some obtuse critical insights, but this is not a movie for those who want to be entertained.

(PaPaPa, AbAb, C, Ho, LLL, VVV, SSS, NNN, A, D, M) Intense pagan worldview with some direct mocking of Jesus and the Church, as well as some positive but minor Christian content and some moral content in midst of immorality; detected 44 obscenities and seven profanities, though may be more because some of the dialogue is spoken in thick accents; intense violence, including a man’s private parts being blown off by cannon ball, a young boy has a window slammed on his penis, a man has a hot chestnut dropped down his pants, and a doctor crushes a baby’s head with forceps; several direct sex scenes of fornication with no nudity; graphic nudity, including rear female nudity, full male nudity with several shots of male private parts, a shot of a bull’s private part, and several shots of an artificial womb; some drinking; some smoking; and a tremendous amount of obnoxious and offensive humor, including gay humor

TRISTRAM SHANDY: A COCK AND BULL STORY is a comedy based on a 1760’s novel that has evoked the joke that no one could make it into a movie because it was so deconstructionist and complex. In addition to its story focusing on a movie-within-a-movie, the book is a story of procrastination, so everyone in the film is procrastinating, and the movie does as well, to the point of boredom.

Starring the boringly droll Steve Coogan as Tristram Shandy, the movie begins with Steve discussing the fact that this is a cock and bull story, with all of its sexual meaning, and how he was born. In the beginning, he talks about how his uncle lost his private parts during a battle, and how he did the same when a nurse dropped a window on him urinating out the window as a little boy. The audience see this in the movie, and hears over and over about it.

In the many scenes of his birth scattered throughout the movie, the doctor is trying to use his forceps. He tries it on all sorts of things: a melon that burst, hands that are crushed and bleeding and the baby’s head that is bloodied with a broken nose. To visualize the birth, the adult Tristram is suspended naked upside down inside an artificial womb.

Steve has several affairs, with his girlfriend who is rasing their son, and with a production assistant, and everyone discuss all their affairs. His co-actors talk about who has a bigger role in the movie, and many jokes are made showing Steve is homophobic.

If the explanation of the movie seems convoluted, it’s because the movie is. TRISTRAM SHANDY: A COCK AND BULL STORY is one of the most dull, tedious procrastinating, and uninteresting movies of all time. Those willing to look past its nudity, sex, and violence in an attempt to see an example of deconstructionist movie about procrastination may find some vague critical insights. For those, however, who want to be entertained, this is not a movie to watch.