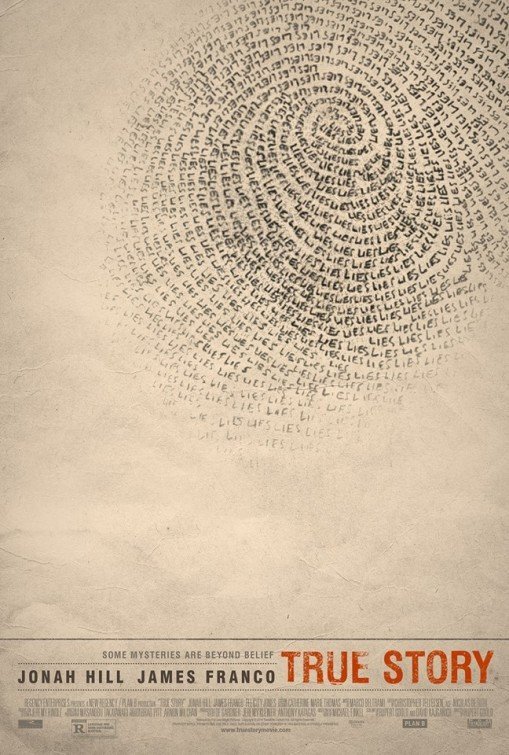 TRUE STORY is a compelling, but dark and disturbing, movie based on actual events. Michael Finkel is an accomplished and celebrated journalist for the New York Times who’s fired after he twists the truth on a story. Trying to get his life back in order, Michael hears about a man, Christian Longo, who killed his family and then told people he was Michael Finkel from the New York Times. Now in jail, Michael goes to meet Christian to find out why he impersonated him. Christian tells Michael he’s a big fan of his writing, and he’ll give him the story behind his family’s murder. The true story.

TRUE STORY has a strong premise, but the movie doesn’t follow through on its promises and has some bad editing. Generally, there’s a light moral perspective in TRUE STORY. Christian, once revealed for who he really is, doesn’t receive any sympathy and the movie reveals how foolish it is to give up truth for fiction. However, TRUE STORY has some strong foul language and other disturbing elements that warrant extreme caution for mature viewers.

(B, FR, C, LL, VV, S, N, MM) A light moral perspective in that the bad guy receives no sympathy in the end, and there’s a speech against believing someone’s sensational story over the truth, false religious references include the murderer being a Jehovah’s Witness, plus a brief scene inside a Christian church; 13 obscenities (including a few “f” words); some strong and violent description of a woman’s murder and her three children, some grotesque images of their bodies are seen, disturbing flashbacks of a man throwing his living children into a river; implied fornication, with woman seen lying on bed afterwards; very brief shot of deceased woman naked in a suitcase, sleeping woman’s bare back shown, upper male nudity; no drinking; no smoking or drug use; and, lying and manipulation throughout.

TRUE STORY is a compelling, but dark and disturbing, movie based on actual events.

Michael Finkel (Jonah Hill) is an accomplished and celebrated journalist for the New York Times. When working on a story in Africa, Michael twists the truth just a little to improve the piece he’s writing. When he’s found out, The New York Times fires him, sending him back to the west coast to see if he can save his career.

At his home, Michael gets a call from a reporter asking to hear his side of the story regarding Christian Longo. Unaware of who Christian Longo is, the reporter tells Michael that Christian was on the run for brutally murdering his wife and three children. While hiding out in Mexico, Christian told everyone he was Michael Finkel of the New York Times.

Michael reaches out to Christian, who’s now in prison awaiting a trial, to figure out why Christian impersonated him. The two men meet at the prison, where Christian says that he’s followed Michael’s career over the years and is a big fan. He tells Michael that he wants his story, the true story of his innocence, to be written by Michael alone. Michael desperately needs a good story to write, so he makes a deal with the giant publisher Harper Collins to do a book about Christian.

As the two spend time talking about Christian’s life and the circumstances leading up to his family’s death, Michael becomes obsessed and consumed by the story. Christian claims he’s innocent and that’s what he plans to plead in court.

However, when his hearing arrives, things take a twist when Christian pleads guilty to the murder of his wife and youngest daughter, but not to the deaths of his other two kids. The judge is bewildered, and Michael feels manipulated because Christian lied to him. It all leads to a dramatic conclusion as Christian’s trial and sentence awaits while Michael tries to understand why he can’t let go of Christian’s story.

TRUE STORY has a strong premise. Jonah Hill as Michael and James Franco as Christian are strong, but not exceptional. The disappointing factor is that the movie is only a step away from being great, which is enough to make it forgettable. The mystery holds viewers initially but fizzles out in the end. Michael’s internal struggle is also compelling at the beginning, but it never grabs onto anything substantial. Finally, the editing is poor and hinders the story’s smooth pacing. TRUE STORY has a lot going for it, but fails to execute.

(SPOILERS) Generally, there’s a moral perspective in TRUE STORY. Christian, once revealed for who he really is, doesn’t receive any sympathy. In fact, when he’s convicted as guilty for the murder of his entire family, the judge delivers a speech against Christian’s lies, and he acknowledges that no one is foolish enough to actually believe such stories. What the judge doesn’t know is that Michael, along with some of the audience likely, wanted to believe Christian. Thus, the movie reveals how much truth people are sometimes willing to give up for a good story. TRUE STORY has some strong foul language and other disturbing elements that warrant extreme caution for mature viewers.