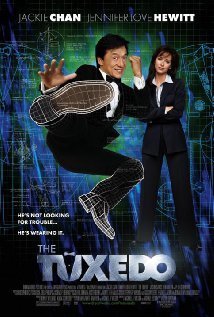 In TUXEDO, when Jimmy Tong proves that he is the fastest cab driver in New York City CSA agent Clark Devlin hires him as his chauffeur. When Clark is incapacitated by a bomb, Jimmy fight a ruthless water baron, who wants to corner the world’s water market. Jimmy’s secret weapon is a tuxedo that can turn him into anything from a great dancer to a karate king to an incredible sniper. The villain has developed a water formula that dehydrates people so that his company can corner the lucrative bottled water market.

TUXEDO is filled with good ideas that are never strung together in a cohesive fashion. The movie was first aimed at children, then transformed into a teen flick in pre-production, and then toned down. Now, the movie is no more than showcase for Jackie Chan’s stunts. The jeopardy is contrived, and the plot alternates between high-octane action and massive plot holes. This is a rough cab drive in a tuxedo, which would be okay except for the constant stream of off-color and dirty sexual innuendo. TUXEDO proves that it takes more than pretty moments and high-octane action to sustain a movie

(Pa, AbAb, B, ACap, LL, VV, SS, N, A, D, ) Eclectic worldview with many immoral elements and a moderately moral though anti-capitalism theme; 19 obscenities and 6 profanities (mostly "Oh my God") as well as violence treated as humor and scatological humor such as deer urinating and the water flowing into the a water bottling plant; Constant action violence including reckless driving, man falling to death, man eating bug, explosions, and martial arts violence complete with kicks to private parts (groin kicks) and many devices (such as ropes) used to maim or hurt with little blood but some gruesome deaths including people dehydrated, shriveled up and turned to dust, drowning under extreme circumstances (bag put over head and filled with dehydrating water); too much sexual innuendo with clear sexual references such as discussion of "wet dream" and man shaking his derriere at woman for a prolonged period of time as well as a woman stripping to her underwear and then trying to strip and mount the hero and homosexual characters; low cut dresses and revealing camera shots including woman in bra and panties and man in underwear; alcohol abuse; drugs suggested; and, lying, impersonation, and greed.

Something happened when Hollywood started producing Hong Kong action star Jackie Chan’s movies. They kept his death-defying stunts and crowd-pleasing comedy in movies such as TUXEDO, but also added off-color sexual and scatological humor, which depreciates his “good vs. evil” stories. In fact, TUXEDO is more “OK vs. greedy.”

In the our interview with Jackie Chan, he said to the reporters present, “I don’t like TUXEDO, and I don’t like the story. I just like Steven Spielberg, and I like the studio [DreamWorks].” He added, “I want to stop making American movies and go back to making Asian movies.” He is probably being more self-critical than necessary, but those are discouraging words for his ardent fans.

TUXEDO opens with a beautiful idyllic natural scene of a waterfall with a deer coming to drink. Suddenly, the deer raises its tail and relieves himself in the stream. As the credits role, the urine flows into the water supply and into a water bottling plant. A man drinks the water and seems to gag as he tries to call the top secret United States agency, the CSA. A plastic bag is put over his head and filled with water. He is drowned as his cell phone is answered.

Cut to Jimmy Tong, a taxi driver who lusts after a beautiful Asian girl who works in an art gallery. He’s known as the fastest cab driver in New York. After an inadvertent run-in with a street bully, he finds a buttoned up woman in the back seat of his taxi, who says that she will double the fare if he can get her across town by the time she puts on her makeup.

When he succeeds, she tells him that the famous playboy billionaire Clark Devlin, will hire him as his chauffeur. Clark Devlin is not all that he appears, however. He is actually a top-secret CSA agent.

Clark gets wounded by a bomb. Before he slips into a coma, he tells Jimmy that Jimmy has to take over for Clark in fighting a ruthless water baron, who wants to corner the world’s water market. His secret weapon is a tuxedo that can turn him into anything from a great dancer to a karate king to an incredible sniper…and even to a wall-crawling semi-spiderman.

Jimmy is teamed up with another C.S.A. agent, who had never met Clark, named Del Blaine, played by Jennifer Love Hewitt. The villain, named Diedrich Banning, has developed a certain water formula that makes people thirsty. His first trials of his new water have some undesirable consequences. The people who drink it turn into dehydrated corpses. (We hate when that happens!) Next, he plans to introduce this dehydrating water into all the major water supplies, so that Banning Water can corner the market. Only Jimmy and Del stand in the way of his conquest of the American water supply.

TUXEDO is a movie filled with good ideas for an action/adventure/comedy, which are never strung together in a cohesive fashion. Director Kevin Donovan says that the movie was first aimed at children, then well into the pre-production he was told to transform it into a teenage flick, and then he was told to tone it down just before shooting started.

Thus, the movie has ended up being a no more than showcase for Jackie Chan’s spectacular, death-defying feats. The jeopardy is contrived, and the plot alternates between high-octane action and massive plot holes. This is a rough cab drive in a tuxedo.

All of that would be okay except for the constant stream of off-color, and even dirty sexual innuendo. There is a lengthy scene of Jackie shaking his booty in the face of a vacuous blonde, and a lengthier scene of the blonde trying to strip him and have sex with him in her hotel suite.

Significant editing would have gone a long way in TUXEDO. Verbal and visual references finally stretched the movie out to unbearable clutter of sexual innuendo. On one side of me at the screening an over-40 reviewer said, “This is boring.” On the other side, his 16-year-old son said, “This is fun,” showing that if you’re in the concrete stage of cognitive development and can’t think through the stages of a plot, you might like this movie.

Jackie Chan is himself, as usual, and acts the same in the outtakes of the movie as he does in the movie. Jennifer Love Hewitt holds the movie together and does an admirable job. Jason Isaacs, who plays Clark Devlin, should have been given more screen time. He knows how to carry a scene, just as he did when he played the villain in THE PATRIOT.

The stunts in TUXEDO are terrific, the lighting is beautiful, and the water bottles show the master touch of a commercial television director. But, the play’s the thing that captures the attention of the king, and it takes more than pretty moments and high-octane action to sustain a movie.