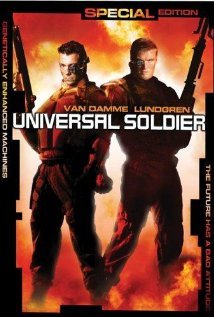 In UNIVERSAL SOLDIER, a top-secret government agency "hyper-accelerates" the bodies of dead servicemen to create unbeatable, sub-human military warriors. The movie is a futuristic gladiatorial bout which delights in one man hunting down another. It cruelly entices viewers to drink in its savage passion and savor the pain, misery and violence.

In UNIVERSAL SOLDIER, a top-secret government agency “hyper-accelerates” the bodies of dead servicemen to create unbeatable warriors. The soldiers have no memory of their previous identity and are devoid of pain and emotion. If one is killed, he is repaired or replaced. They are the ultimate fighting machine until two of them revert to their past selves and slip from the grasp of their creators. The first to escape is Luke Deveroe (Jean-Claude Van Damme) with the help of TV reporter Veronica Roberts. They journey to Louisiana, in search of Luke’s parents and the doctor who performed the “hyper-acceleration.” Meanwhile, UNIVERSAL SOLDIER troops are in hot pursuit. Leading them is Sargent Andrew Scott, a crazed, man-of-arms. In a bloody showdown, Luke hurls Scott onto the teeth of a wheat thrashing machine, which ejects his body parts like chaff.

UNIVERSAL SOLDIER is a futuristic gladiatorial bout which delights in one man hunting another. It entices viewers to drink in its savage passion and savor pain, misery and violence. Towards the end, Scott makes a necklace out of human ears–a metaphor for the sadism and destruction worn by our so-called movie “heroes.”