"Courageous Drama Takes on the Issue of Abortion" 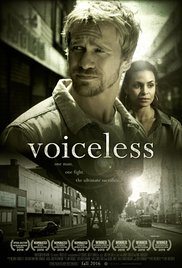 VOICELESS is an inspiring, powerful drama about a pro-life activist in Philadelphia that tackles the issue of abortion. Jesse Dean, a rehabilitated felon dishonorably discharged from the military, becomes the first outreach leader at New Life Fellowship Church, where his wife grew up. Jesse also volunteers to work at a soup kitchen to finish his community service sentence. On his way to the church one day, Jesse meets a young pregnant woman struggling with the choice of whether to abort her baby. Seeking help from his church, Jesse takes a stand to educate and empower women to choose life.

VOICELESS inspires Christians and churches to become defenders of the fatherless. It powerfully demonstrates that every Christian has a moral obligation to do what’s right, even if they experience persecution for their beliefs. As such, it encourages people not to sit idly by but to instead set people free with the pro-life gospel of Jesus Christ. VOICELESS does contain some disturbing content, including a woman who suffers a drug overdose and a scene where a man is shot. So, caution is advised for older children.

(CCC, BBB, VV, DD, M) Very strong Christian, moral, pro-life worldview says every person has the right to life, God forgives us for our past transgressions, Christians have a moral obligation to take a stand against sin, and doing penance for your sins; no foul language but at least one light vulgarity (use of the word “crap”); violence includes bullies beat up a person preaching on the street, a picture of a person who was murdered, disturbing image of a woman found dead from a drug overdose, some boxing training, brief fighting, woman has a mark on her face from her husband because he wanted her to get an abortion, man arrested by police, and a man is shot dead on the street (a pool of blood is seen); no sexual content; no nudity; no alcohol use; no smoking but a woman is found dead from a drug overdose; and, light miscellaneous immorality includes tattoos on one man, dysfunctional families, lying, keeping secrets, and bad role models but generally rebuked.

VOICELESS is an inspiring, powerful drama about a pro-life activist in Philadelphia that tackles the issue of abortion.

Jesse Dean, a young and ambitious man from Oklahoma, relocates to Philadelphia with his wife. Jesse feels led to seek a position at New Life Fellowship Church, the church where his wife grew up. He approaches the pastor, who agrees to hire him as the church’s first outreach leader. Soon after, Jesse is saddled with the daunting task of transforming a dilapidated building into an outreach center for the community. A rehabilitated felon dishonorably discharged from the military, Jesse also volunteers to work at a soup kitchen to finish his community service for his crime.

On his way to the church one day, Jesse meets a young woman named Tracy, who struggles with the choice of having an abortion. After she chooses to go through with it, Jesse takes note of how many women go into the abortion clinic per day.

This inspiring movie will challenge and encourage both individuals and churches as a whole to take their own stand regarding the state of abortion in the United States. It clearly depicts the fear and trepidation most Christians face when it comes to bringing their private church faith into the public eye. To its credit, the movie doesn’t say that standing up for your faith is simple. On the contrary, it accurately portrays real life people struggling with the gray areas of life and taking a leap of faith in the midst of their fears.

Filmed in Philadelphia, VOICELESS gives viewers an inside look at the daily battles Christians and Non-Christians face as the Adversary wages war on their souls. The movie helps parents begin a dialogue with their teens about abortion and the consequences taking a pro-life or pro-abortion stance can have on your life. Jesse. the hero in the movie, says it best when he says, “This is about being a voice for the voiceless, about speaking out for those who can’t speak for themselves.”

Due to some disturbing scenes and situations in VOICELESS, including a woman who dies from a drug overdoes and a man who’s shot, MOVIEGUIDE® advises caution for older children.