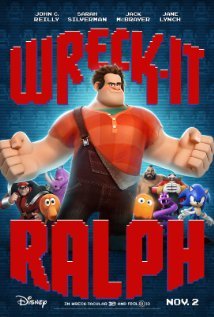 WRECK-IT RALPH is Disney’s latest animated movie. It brings moviegoers into the world of arcade games and shows what the characters do when no one is playing their game. Ralph is the “Bad Guy” in the game “Fix-It Felix Jr.” His job is to break things so that Felix can come and fix them. Lonely and tired of being unappreciated, Ralph decides it’s time to change things. He decides to leave his game and enter other games in search for a prized medal that he thinks will make him loved. In the process, he meets a little girl whose problems are worse than his. Eventually, Ralph learns to be selfless. He also learns what it means to be a true friend.

WRECK-IT RALPH is a funny, entertaining, moving, well-crafted story. It has a great moral worldview of loving your neighbor as yourself, literally “your neighbor” in Ralph’s case. There is some ambiguity when Ralph is considered a “good” “Bad Guy.” There’s also some light animated violence and scatological humor. Otherwise, however, WRECK-IT RALPH is a morally uplifting, redemptive family movie all ages can enjoy.

(BB, CC, V, A, M) Strong moral worldview where protagonist learns selflessness through loving others more than himself, with strong Christian, redemptive elements, including character is willing to lay down their life for someone else; no foul language but some scatological humor; light animated action violence in video game includes fighting Cy-Bug monsters with guns, a zombie shows his heart, character destroys building, and some slapstick violence; no sexual content; no nudity; someone drinks a beer at tappers bar; no smoking or alcohol; and, some name calling.

Litwak’s Family Fun Center is full of arcade games for all ages to enjoy; but, when the lights go off and the doors close, the characters inside the arcade games live a life of their own. The characters are made of programmed code and can travel between different arcade games through what they call Game Central Station, which in reality is the power strip into which the games are plugged. We are introduced to Ralph, a character in the 8-Bit arcade game Fix-It Felix Jr.

Ralph is a big man in the world of arcade games. Nine feet tall and 600 pounds, he’s a formidable force. His job is to wreck the apartment building of the locals who are called “Nicelanders.” As he wrecks the building, Fix-It Felix, Jr. comes in to fix the building. If Felix fixes the building without getting hit by the bricks that Ralph throws at him, he (and the gameplayer) wins, and the Nicelanders then proceed to throw Ralph off the building and into the mud. The Nicelanders then celebrate with Felix and award him a medal as Ralph goes to live in a pile of bricks. This is Ralph’s job. After all, he’s the bad guy in the Fix-It Felix Jr game.

Because of his destructive nature and his social inept-ability, the people of Niceland ostracize Ralph even when the game isn’t being played. Ralph even attends a Bad Guys “Anonymous” group where one member tells Ralph that just because he’s a “Bad Guy” doesn’t mean that he’s a bad guy. However, Ralph is tired of being the one that is never appreciated and always has to lose. Ralph says he would like to earn a medal for once, but he’s told that “Bad Guys” can’t win medals. Finally fed up, Ralph angrily tells Felix and the Nicelanders he’s going to go get a shiny medal and that when he does, they will have to accept him.

Ralph leaves the world of Niceland to find a game where he can find a shiny medal to award himself. As he travels between different games, he meets a young girl named Vanellope who’s even more alone than Ralph is. Through Venellope, Ralph learns an important lesson of helping others instead of himself.

WRECK-IT RALPH is highly entertaining. The story is genuinely fun and moving. Also, characters are each unique with their own little quirks and personalities. Children will enjoy the great animation and adults will love the jokes about the games from the 1980s and 90s. Best of all, WRECK-IT RALPH has a strong moral worldview of loving your neighbor as yourself, literally “your neighbor” in Ralph’s case. The movie appears to have a Christian, redemptive definition of loving your neighbor and being a true friend.

WRECK-IT RALPH does have a slight ambiguity. Ralph is programmed to be the “Bad Guy” in the arcade game and, according to the movie, that’s not bad. Even so, in the end, even though Ralph is still the “Bad Guy” in the game, the people around him choose to accept him because he chose to act selflessly. Thus, younger children could be confused about Ralph in the end being a “Good Bad Guy.” There’s also some light action violence and some scatological humor in WRECK-IT RALPH, so caution is advised.