"I Am My Brother's Keeper" 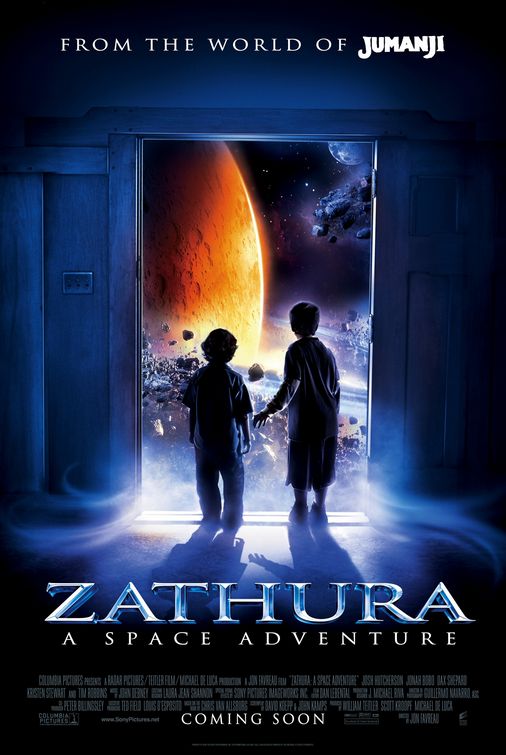 ZATHURA is a delightful space adventure geared to families. Two bickering boys, Danny, age 6, and Walter, age 10, uncover an old tattered metal board game. The game pummels their dad's house with a meteor shower and catapults the house into outer space. So begins an exhilarating, scary, unpredictable adventure with a rampaging robot, monstrous lizard aliens and other dangerous obstacles. Walter and Danny realize they must keep playing the game in order to get home. They might not survive the journey, however. Especially if they keep bickering. . .

The bad news with ZATHURA is that the game manipulates reality and the movie suggests a belief in alternate realities in a science fiction milieu, complete with a black hole. The good news outweighs the bad, however. Not only is ZATHURA a very entertaining, energetic, funny, and creative movie that will delight many, it also makes a few strong moral points. For example, both Danny and Walter learn to respect their brother and take care of one another. Danny also learns to put aside his desires for the good of other people. MOVIEGUIDE® advises caution for older children considering the problem areas, including a few obscenities.

(BB, Pa, H, L, V, M) Strong moral worldview with strong positive lessons for children and father is a strong role model, though he is a bit distracted by his work, with pagan and humanist elements where game appears able to manipulate reality or create its own fantasy world and the idea of alternate realities is expressed implicitly; three obscenities (one of which is lovingly rebuked by boy’s father), five light exclamatory profanities such as “My God,” man uses the word “sphincter” in referring to traveling through a black hole in outer space, and man burps; light action violence, such as small and medium meteors crash into house and on floor and objects, scary (for younger children) lizard aliens try to get and grab people to eat them, spaceships fire on flying house and demolish much of it, scary robot tries to kill boy, robot smashes through walls and ceilings, robot falls down stairs, and explosions; no sex, but fourth grader says he has a girlfriend and teenage girl is attracted to older young man but nothing comes of it; no alcohol; no smoking; and, brothers often bicker loudly with one another, teenage sister fails to keep an eye on younger brothers despite father's orders and boy cheats at game but is rebuked.

ZATHURA is a delightful space adventure based on the fantasy worlds of author Chris Van Allsburg (THE POLAR EXPRESS and JUMANJI). Despite some ontological problems with its concept of reality and some brief foul language (one instance which is rebuked), ZATHURA is funny, inventive and otherwise positive.

The movie opens with two brothers, six-year-old Danny and 10-year-old Walter, fighting one another outside their dad’s house. Walter treats Danny terribly, and Danny calls Walter a very bad name. Their father rebukes Danny for saying the bad word and tries to cheer him up, but he and Walter keep fighting.

Their father leaves for work, leaving them in the care of their older sister, Lisa, who ignores her father’s instructions after he leaves and goes back to sleep. Danny and Walter keep bickering until Walter lowers Danny into the dark, scary basement from the dumbwaiter.

In the basement, Danny discovers an old tattered metal board game, “Zathura.” After trying unsuccessfully to get his brother to play, Danny starts to play on his own. A spaceship marker moves by itself, lands on a space, and a card is ejected. “Meteor shower, take evasive action,” it reads. Suddenly, a shower of hot, molten meteors pummels the house. When it’s over, Walter and Danny discover that the house is flying in outer space near Saturn!

So begins an exhilarating, scary, unpredictable adventure with a rampaging robot, monstrous lizard aliens and other dangerous obstacles. Walter and Danny realize they must keep playing the game in order to get home.

The bad news with ZATHURA is that the game manipulates reality and the movie suggests a belief in alternate realities in a science fiction manner, complete with a black hole in outer space. These elements have aspects of paganism and humanism in them, but most people or children probably won’t consciously notice these ideas because they mostly just set up the main story and provide resolutions to a couple plot problems. Furthermore, although the father rebukes one obscenity, he is not there to rebuke two other obscenities.

The good news is that not only is ZATHURA a very entertaining, energetic movie that will enchant many, it also makes a few strong moral points. First, both Danny and Walter learn to stop arguing and take care of one another. Walter also learns to share with other people and sacrifice his desires for the good of others. Finally, Tim Robbins plays a positive, caring father figure who tries to help his sons, even though he is somewhat distracted by a project he is doing for work.

Jonah Bobo and Josh Hutcherson are a hoot as the two bickering brothers, Danny and Walter, respectively. Director Jon Favreau displays a deft hand directing the young boys and the rest of the cast, which also includes Dax Shepard as a mysterious, no-non astronaut and Kristen Stewart as the sister. The actors do a great job of making this well-written, fun script come alive. The special effects are state-of the-art, including Stan Winston’s creation of the lizard aliens, but they are also done in a fun retro style that reflects the 1950s milieu of the mysterious game that Danny discovers.

The good outweighs the bad in ZATHURA, which is surely one of the more entertaining, funny and original family movies of the year. MOVIEGUIDE® suggests a caution for older children, however. Parents who decide to allow their children to see ZATHURA will need a dose of media wisdom to navigate the problem areas, but the positive aspects of the movie will help them concentrate on the good.