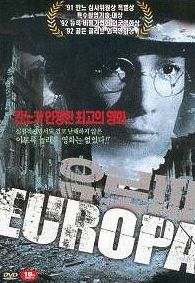 ZENTROPA is a highly stylized European melodrama set in a nightmarish postwar German landscape. The underlying premise of a young American drawn into a nasty vortex created by leftover Nazi terrorists is interesting, but the story ultimately takes a back seat to arty camera tricks, murky metaphysics and dreadfully dull pacing.

ZENTROPA opens with a “you are getting drowsy” intonation by Max Von Sydow directed at young Leopold Kessler, an American who has ventured into postwar Germany. Leopold lands a job as a conductor on the Zentropa Railway’s only first-class sleeping car. Leopold meets Lawrence Hartmann, owner of the railway, and daughter Katharina. Allied forces are seeking to punish perpetrators of the holocaust, and Zentropa supplied boxcars which transported Jews to concentration camps. Hartmann is overwhelmed with fear and guilt, leading to a bloody bathtub suicide. Katharina has intentions for Leopold and involvement in the pro-Nazi underground. While the war may be over, collaborators with the Allies are subject to assassination without notice. Leopold, fluent in English and German, proves to be the ideal, unwitting participant in some dastardly plans.

This premise would be a great setup for a cloak and dagger thriller, but ZENTROPA bogs down in a stylized, melodramatic presentation, with stark black and white imagery suddenly bursting into color. Whether the disembodied voice is supposed to be God, Mr. Author’s Message, or a lounge-act hypnotist is unclear. Whoever it is, we are left with another “Life stinks, then you die” message.